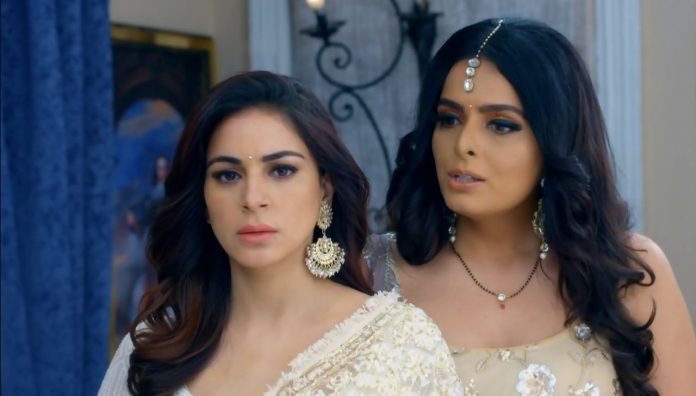 Kundali Bhagya 6th August Rishabh shocking statement Preeta humiliated Shrishti and Sameer determine to stop Karan and Mahira’s marriage. She gets his support. He gets scared of Kareena. He thinks he will be kicked out of the house. Sherlyn tells Preeta that she isn’t saying anything false, Preeta has come to attend her husband’s marriage. She reminds the marriage that Karan did with Preeta in front of her society. She asks Preeta does she still remember those golden times.

Preeta worries when Sherlyn threatens her about the defamation Sarla would be facing. Preeta doesn’t want Sherlyn to trouble her more. Sherlyn tells her that Sarla and Shrishti will suffer the taunts. She wants to see Preeta’s heart burning. She tells that Preeta is Karan’s official wife but Karan will dump her by marrying Mahira. She asks Preeta to know her status in the society, of an abandoned wife. She is sure that Karan’s love has ended for Preeta. She asks Preeta not to hope that Mahesh will help her.

She tells that Karan’s love has turned into hatred. The family witnesses Karan and Mahira’s wedding. Karan tells them that Preeta has to come at the wedding dais. Preeta is summoned again. Kritika tells Sameer that Preeta will get insulted by the family. Sameer also feels the same. Shrishti tries to get his attention, but he runs away from her. Shrishti gets Preeta to witness the wedding. Preeta recalls Sherlyn’s bitter words.

She also thinks of her marriage with Karan. She doesn’t lose courage and hurts herself by being around Karan. Sherlyn doesn’t want Preeta to stop the marriage. Shrishti wants Preeta to stand for herself. Sherlyn thinks if Preeta will claim to be Karan’s wife. Sarla tells Janki that Preeta went to Luthra house and will face insult again, she may harm herself in sorrowful moment. She doesn’t want Karan to hurt her. Janki tells her that Preeta will stop caring for Karan’s deeds. Sarla tells her that Preeta cares for him, even if she smiles, she hides her sorrow. She understands Preeta’s feelings.

Janki tells her that Karan is marrying Mahira. Sarla tells that Karan and Preeta are not destined for each other, Karan wants to test Preeta’s patience and giving her more sorrow. She didn’t think that Karan would take such a step. Karan asks Preeta if she wants to say something. Preeta tells him that she wanted to sit on the dais and see the wedding happening. Shrishti learns that Sameer is scared and doesn’t want to help her. She gets upset. Rakhi realizes that the gathbandhan cloth isn’t brought by yet. Shrishti rushes to hide it. The pandit tells that the marriage can’t proceed until the gathbandhan/alliance bond happens.

Karan asks them to stop the marriage for some time. The marriage gets delayed. Karan wants to talk to Preeta again. Rishabh finds him restless. Sherlyn tells that she will take Mahira to her room for some time. Sanjana tells the family that she is lucky to get a son-in-law like Rishabh. The family praises Rishabh for succeeding in every relation. Rishabh tells them that Karan is also good-hearted, he has more qualities than him.

Reviewed Rating for this particular episode Kundali Bhagya 6th August Rishabh shocking statement: 4/5
This rating is solely based on the opinion of the writer. You may post your take on the show in the comment section below.