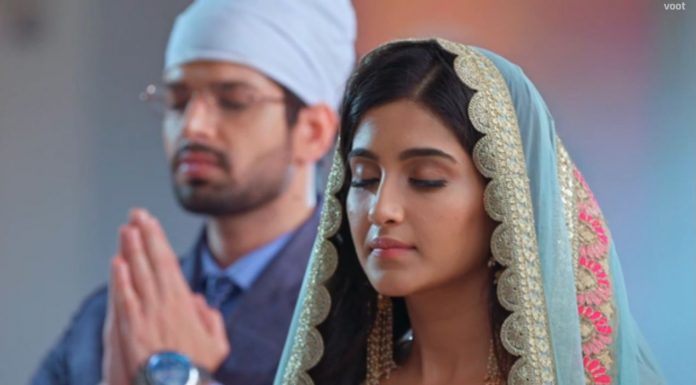 Choti Sardarni Meher Vikram to meet 7th August 2020 Sarabjeet meets Vikram and returns his wallet. He hugs him thinking he is his friend Manav. Vikram tells him that he isn’t Manav. He taunts Sarabjeet for the huge scam. Sarabjeet tells him that everyone knows him well, that he can never cheat his people and land. Meher comes to Sarabjeet. Vikram makes a leave before she comes. Sarabjeet tells Meher that the person was just someone. They go home. Vikram feels Sarabjeet wasn’t worried when confronted.

He thinks either Sarabjeet is much clever or really innocent. He wants to reach the case’s truth. Meher wants to visit Kulwant. Param wants to meet Yuvi. He wanted to go along Meher. Meher learns the matter about Sarabjeet dragged into the big scam. She didn’t know it before. Sarabjeet wanted to hide the matter from her. They reach Kulwant’s house. He tries to explain her. She tells him that she could have known it, he should have not hidden his worry from her. He tells her that there should be transparency between them.

She asks him to share his problems with her, maybe she can help. Sarabjeet didn’t wish her to worry. They get a shock on seeing the blood marks on the floor. Yuvi cries and tells them about Kulwant’s accident. Meher calls up Ginni. She breaks down knowing her mum is critical. Sarabjeet consoles Meher when they learn that Kulwant is dead. He calls up Harleen and tells her that Kulwant passed away. He sends Lalita and Karan home.

Harleen pacifies Meher and tells that they will be reaching at the hospital. Meher meets her family at the hospital. She shares their sorrow. She gets a relief on knowing that Kulwant survived. Meher meets her mum. Kulwant is in shock about Manav’s return. Manav calls up Sarabjeet to speak to him. Meher answers the call. Sarabjeet takes the phone and argues with Vikram. He doesn’t want the blames. He promises to expose the real culprit behind the scam. Vikram thinks Sarabjeet is the culprit himself.

Sarabjeet answers him well. Meher wants to know who is Vikram and why is he after ruining Sarabjeet. Vikram decides to meet Sarabjeet. He fixes a meeting. Sarabjeet declines his offer. He tells that he has to go and address his people in the press conference. He tells Vikram that he has to be responsible towards his people, the CBI can wait, he isn’t scared of the CBI enquiry. He isn’t scared of Vikram’s threatening. He shifts the meeting for the next day. Robby and Harleen post about Kulwant’s death on the social media. They rush to the hospital to give their condolence.

Sarabjeet tells Meher that he will meet Vikram and clear all the charges on him. Robby and Harleen try to pacify Rane and others. Rane tells that Kulwant isn’t dead, she is recovering now. Harleen asks what do they mean. Meher tells about the misunderstanding because of Yuvi. Harleen accuses her for creating a stir in their work schedule. Meher wishes luck to Sarabjeet. She knows he is true and doesn’t need to worry. Sarabjeet thanks her. Sarabjeet and Meher get to see Vikram live on the online conference. Meher receives a shock to see Manav.

Reviewed Rating for this particular episode Choti Sardarni Meher Vikram to meet 7th August 2020: 5/5
This rating is solely based on the opinion of the writer. You may post your take on the show in the comment section below.