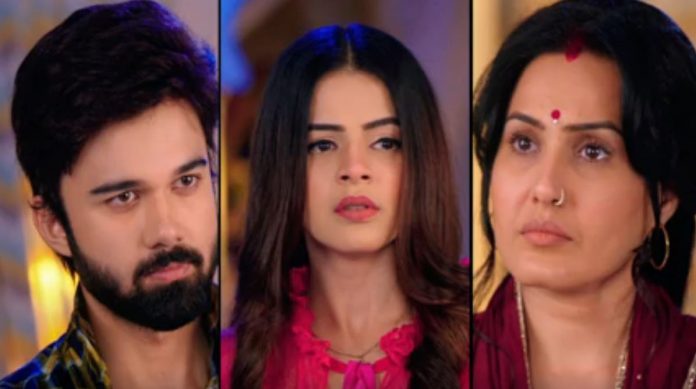 Shakti Soham returns with a motive 7th August 2020 Heer and Rohan search for Sohan. Heer finds Soham finally. She rushes to him, while Virat barges in the house to ask his family about torturing Gurvinder by wrong customs. He questions them for their inhumane act. Parmeet tells him that they are doing everything to get an heir. Jharna supports the family. She tells that there is no gain without pain. Virat scolds her.

He tells her that even if Gurvinder doesn’t get a child, she shouldn’t get tortured like this. He apologizes to Gurvinder. He feels like he failed in protecting her. He declares that Gurvinder will never suffer like this again. He gets angry on his family. Sant tells Daljeet that Gurvinder is like a kinner, if she can’t give them an heir. Parmeet asks Gurvinder not to get into Virat’s words and just obey them.

Jharna tells that Gurvinder met Heer, they have good friendship. She complains about Gurvinder. Parmeet asks her to stay away from Heer. Gurvinder tells that she met Heer on the way, Heer prayed for her. Heer asks Soham to come back home with her. She tells that he can’t leave her on the eve of Raksha bandhan. She asks why did he fight with the family for her sake. He refuses to go home. Rohan calls Preeto and informs that Heer has found Soham. Preeto thought that Heer will not find Soham.

Shanno asked him to come back home to fight for his rights. She told him to find out Heer’s secret, that the family doesn’t want her to get married. She told him that just he can get Heer’s happiness, just he can secure Heer’s future from the selfish elders. She asked him to stay there until Heer finds him and gets him home. Heer asks Soham to return home for her sake.

Soham agrees to her since he wants answers from his elders. Virat imagines Heer and gets upset. Gurvinder thinks Virat is still feeling for Heer. She wants to unite Virat and Heer by taking an initiative. Heer brings Soham home. She asks him to sort his differences with elders. Harak tells her that Soham shouldn’t interfere in elders’ matters. Preeto asks Soham to give a written statement that he will never question them for their decisions. Heer asks them not to force Soham. Rohan asks Heer to let Soham give the statement.

Heer takes a stand for Soham. Harak tells her that he decides in his house, he wants betterment of all the children. Soham writes the statement. He thinks its false statement, he has come for Heer’s happiness and will always take a stand for her. He wants her to get married to a nice guy. Harak tells Soham that he should remember his words. Heer asks them to stay happy like before. She tells that she will cook the food for them. Preeto asks Soham why didn’t he leave the city when he left from the house long ago. She wants to know who has asked him to return. Soham doesn’t answer her.

Reviewed Rating for this particular episode Shakti Soham returns with a motive 7th August 2020: 4/5
This rating is solely based on the opinion of the writer. You may post your take on the show in the comment section below.