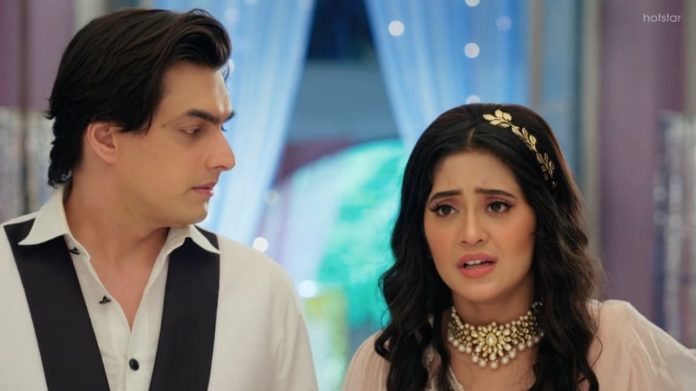 YRKKH New twist coming Manish meets an accident Kartik and Naira try to know about their daughter. Kartik wonders if Naira had seen Kunal. Kunal tells that Naira didn’t see him. Kunal asks Kartik why is he running away from the truth if he didn’t wanted to know anything. He asks Kartik if he doesn’t want to know about his daughter. Kartik doesn’t want any false hope again. He tells Kunal that he has decided to shut the case findings. Kunal tells him that he has called the hospital ward boy as well.

He asks Kartik to meet Anil once. Kartik is tensed that Naira may see Anil and identify him. Naira gets to see Anil and thinks that she knows him. She gets calls from home. Dadi summons her for Gayu’s function. Naira gets leaving. She stops when she sees Kartik’s car in the parking lot. She goes to see Kartik. She finds Kartik with Kunal. She overhears their conversation. Anil meets Kartik and tells him that he was there on duty when Leela sold the baby for money, but he couldn’t stop the dealing. Kartik gets moved on knowing that his daughter was sold.

He feels sorry that he couldn’t protect his daughter. He asks Anil how could he let the deal happen. Anil apologizes. Kartik tells him that his apology won’t help him now. Anil reveals the entire truth to him. Anil tells him about the baby’s death. Kartik shatters with the truth. He doesn’t know why did it happen with them, when Naira was so precautious and scared for the pregnancy, she deserved happiness. He feels sorry for Naira more than himself.

Naira overhears the truth and sheds tears. She wants to know everything that happened with their daughter. She gets too hyper and shouts to speak to Anil. Kartik calms her down. He tells her that he will tell the entire truth to her. She is in shock. He tells her that their baby was sold by Leela, who lied to them. He cries that their baby died after Leela sold her to someone. He tells that Anil has done the cremation and didn’t let them know the truth. Naira breaks down and feels that she has lost her baby once again. It rains while they cry on their huge sorrow.

Kartik and Naira try to calm themselves. They return home. Dadi doesn’t know their sorrow. She thinks they had gone to get a gift for Gayu. Samarth and Gayu had been arguing since he reacted about Vansh. Gayu doesn’t take any health drink. Samarth asks her not to hurt the baby. Dadi and Manish scold them for risking the baby due to their arguments. Dadi tells them that they should focus on the baby if they really care.

Manish tells that they are mature individuals and should handle their issues. Dadi asks Kartik and Naira to give a rocking performance and end the function with style. Kartik and Naira conceal their emotions. They dance with the family and hide tears within. The family doesn’t feel anything by their false smile. Later, Kartik apologizes to Naira for hiding the matter. She asks him how did he differentiate the pain of a father and a mother, if they both are not capable to handle the matter together.

She still forgives him since he had taken all the burden of sorrow on himself. She recalls that he had gone to jail for the sake of family, and also hidden the matter to save her from sorrow. She feels he is strong enough. She expresses her wish to get a baby, so that they get a daughter and Kairav gets a sister. She tells Kartik that they should plan a baby and its right time now. Kartik asks if she is sure about it. She sounds sure and hopeful.

Kartik wants to end her sorrow. They share a moment. He accepts her request. They pray to get a daughter. After Kaira’s search mission ends, Naira and Manish meet with an accident. Manish will be turning into a child mentally. Kartik will be seen in his father’s role and deal with him patiently. Keep reading to know ahead of the track. Comment, like and share the post.

Reviewed Rating for this particular episode YRKKH New twist coming Manish meets an accident: 5/5
This rating is solely based on the opinion of the writer. You may post your take on the show in the comment section below.