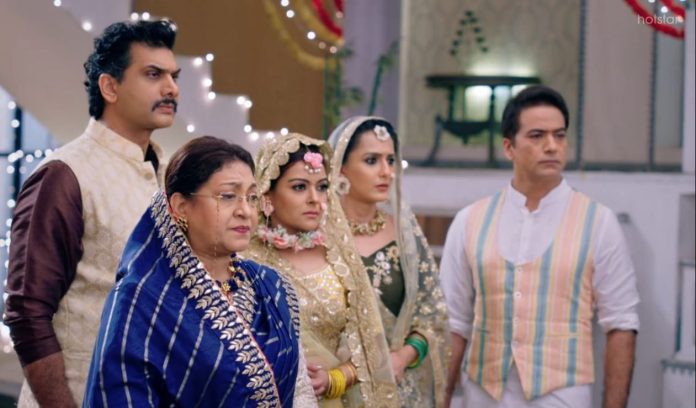 YRKKH Upsetting shocker twist for Goenkas 8th August Kartik and Naira decide to plan a baby so that their family gets complete with a daughter. Manish and Suwarna have a cute moment, when she admires their togetherness. She expresses her wish for keeping Teej fast for his long life. He doesn’t want her to keep the fast since she is having health issues. She doesn’t want anything to obstruct her willingness. She just asks him to support her. He disagrees. They get into an argument. Kartik and Naira find them fighting and try to help.

They learn about Suwarna’s 25th Teej fast this year. They wish her for the silver jubilee fast and ask her to observe it. Suwarna thanks them for support, but Manish gets against. Manish gets so irritated by their team up that he angrily tells Suwarna that he won’t come to break her fast in the evening. Suwarna doesn’t want him to speak anything inauspicious and ruin her mental peace. She tells him that she is keeping the fast for him, his happiness matters first, else she won’t be able to enjoy the function.

Manish doesn’t listen to her. Kartik and Naira try to make Suwarna’s Teej very special so that Manish’s annoyance also subsides. Dadi is happy that Suwarna is observing the fast. She wishes that Manish and Suwarna always stay together and celebrate many such occasions for years to come. Kartik and Naira wonder how they would look and behave when they get old like Manish and Suwarna. They get daydreaming about their future when they will also be parents-in-law for Kairav’s wife. They get a glimpse of their future look.

They realize that they will not look so odd, they will still be in love like always. Kartik and Naira get ahead with the preparations. Kartik and Manish’s father-son moment is seen. Manish wants to retire from work and enjoy his life. He asks Kartik to head all the work in their company. Kartik wants his guidance always. Manish gets emotional that Kartik always wants to live under his shadow. Kartik learns that Manish is trying to buy Naira’s academy and surprise her. Manish tells him that Naira has made a big sacrifice, they can get the academy back for her by settling the amount to the client.

Kartik likes the idea. He doesn’t tell anything to Naira and keeps it a surprise. He wants Manish to attend a meeting at the office. He avoids work for some time. Naira tells that she is visiting the market to get some stuff for the function. The family wants her to make the function a grand one for Suwarna. Manish asks Naira to drop him to office. Kartik warns Naira against speedy driving. He alerts her of the accident-prone route. Naira promises to be careful. Naira and Manish leave from the home. They unfortunately meet with an accident. Kartik learns about their accident and rushes to them.

Reviewed Rating for this particular episode YRKKH Upsetting shocker twist for Goenkas 8th August: 5/5
This rating is solely based on the opinion of the writer. You may post your take on the show in the comment section below.