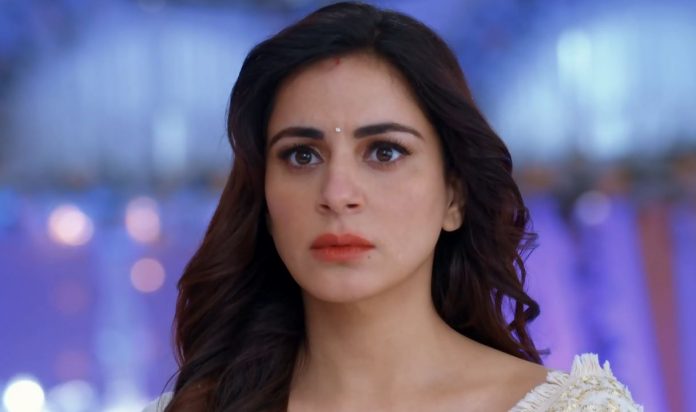 Kundali Bhagya Wedding gets a halt 10th August Karan and Preeta’s argument gets never ending. He asks Preeta to attend the function, instead crying at some corner. He asks her not to hide her emotions. Shrishti and Sameer try to stop the marriage. Sherlyn gets Mahira back to the mandap. Ramona asks Rishabh to join them and see the rituals. Rishabh feels bad for Preeta. Karan asks Preeta why is she shedding take tears for Mahesh. Preeta cries for Mahesh.

She thinks to tell Karan that Sherlyn and Mahira are a big threat for Mahesh. She pleads to him to listen to her once. Karan gets irritated by her sobbing drama. He asks her not to involve Mahesh in their matter. He hurts her and asks her to attend his marriage. He taunts that incomplete things don’t look good. Shrishti asks Sameer to try and avoid things, so that there is a delay in the marriage. She asks him to think of an idea.

Rishabh finds Karan dragging Preeta to the mandap, just to satisfy his ego. He asks Karan to leave Preeta’s hand. Karan tells Rishabh that the marriage won’t happen without Preeta, she means a lot to him. Karan and Mahira sit in the mandap. Karan taunts Preeta. Rishabh wants his madness to end. Karan asks Rakhi to do the rituals in a way that his marriage becomes of lifetime. Preeta recalls her marriage with Karan.

Karan warns Pandit against teaching him anything. Karan tells him that he can’t tolerate anyone coming between Preeta and him. His statements give a hope to Rishabh, while the family is confused. Shrishti asks Sameer to give a good plan. Sameer tells that they will faint Karan and hide him in some room, but he doesn’t have any back up groom. She asks him to come up with a good plan. Karan and Mahira get ready for the marriage rounds.

Preeta feels hurt on seeing him take the rounds. She makes a leave. Sherlyn informs Prithvi about Karan and Mahira’s marriage. She tells that she is really happy to see Preeta hurt. Prithvi tells Sherlyn that she should stay safe at home. She asks for his help. He tells that he is ready to help her. She wants him to kill Mahesh. He surprises her by meeting her in Luthra house.

She tells that the entire family is against Preeta, who has lost now. Sarla and Janki feel restless and cry for Preeta and Shrishti. Sarla wants to know about them. She feels that Preeta will break down if she fails to tolerate. She thinks to go to Luthras and get Preeta back. Sameer tells Shrishti that he has no plan. Shrishti makes a plan to kidnap Karan. Preeta returns to the dais. She knows that Karan can’t see his destruction happening. She wants Karan to get happy. She wants to see his destruction if he wants so. The police arrives to stop the marriage, which gets a shocking thing for Luthras and Mahira.

Reviewed Rating for this particular episode Kundali Bhagya Wedding gets a halt 10th August: 4/5
This rating is solely based on the opinion of the writer. You may post your take on the show in the comment section below.