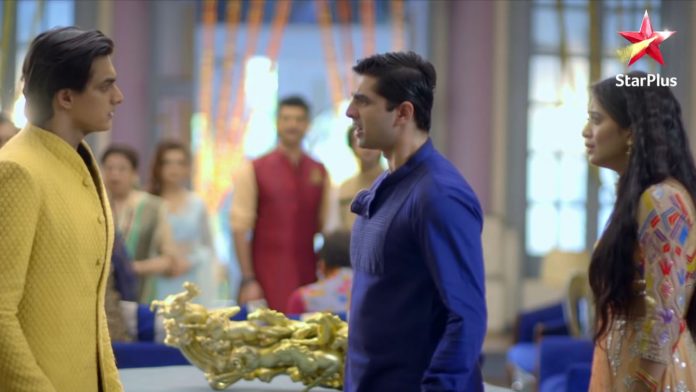 YRKKH Starplus Update Promo 13th August 2020 Goenkas try to know from Kartik about Manish’s illness. They ask Kartik what did the doctor say about Manish. Kartik tells them that Manish has a swelling in his brain, which made him mentally unstable. He tells Naira that it happened because of the accident. He blames her. The family feels sorrowful seeing Manish’s state. They decide to get Manish treated by the best doctors. They want Manish to get normal like before. Kartik doesn’t think its possible.

He breaks down and rushes to stay alone. He goes to the terrace and weeps. Naira also shatters and blames herself. She feels guilty that she didn’t listen to Kartik and took the wrong route. She feels that she is responsible for the accident and Manish’s condition. Kartik and Naira shed tears. Kartik loses his cool and prefers to stay alone for some time. The family tries to administer the medicines to Manish. Manish stays away from everyone.

They don’t want Manish to hurt himself. Naira tells that Kartik would be managing Manish well, since Manish has listened to him. Akhilesh asks Kartik to attend Manish and administer the medicines to him. He tells that Manish needs him. Kartik doesn’t listen to him. Akhilesh slaps him and asks him to come to terms with reality. Kairav calls Kartik at the right time and talks to him about his new finding. He asks Kartik if a son becomes a father after the father grows old. Kartik tells Kairav that its really possible.

He recalls Manish and his conversation, when he challenged that he will become Manish’s father one day. He feels so sorry for Manish. Suwarna feels Manish didn’t break her fast as he told her in the morning. Kartik reaches Manish to help him. Manish doesn’t listen to him. He gets scared of Suwarna. Naira helps Kartik in administering the medicines to Manish. Suwarna breaks her fast and cries a lot. She didn’t know that life will change in this manner. Kartik finds Manish asleep. Dadi worries that Manish has to be taken to the room.

Kartik tells that he will take his father like his child. He takes care of Manish like his child. He doesn’t want anyone to worry. Kartik does a father’s duty towards Manish. Dadi gets emotional. Kartik promises Manish that he will always be with her. Manish doesn’t want him to go. Kartik tells that he will never leave him alone. He cries for Manish. Naira cries on seeing Kartik’s pain. They seek medical help. Doctor advises them to keep Manish happy and not go against his wish. Kartik vents his anger on Naira.

He accuses her for Manish’s accident. Naira tells that she didn’t do it intentionally. Kartik asks her if her tears will bring back Manish to normalcy. Naksh stops Kartik from accusing Naira. He reminds Kartik about Akshara’s accident done by Mansi. Kartik gets speechless. Naira tells Kartik that Manish is her dad also. She doesn’t forget that Goenka family is her family. They get at loggerheads.

Reviewed Rating for this particular episode YRKKH Starplus Update Promo 13th August 2020: 3/5
This rating is solely based on the opinion of the writer. You may post your take on the show in the comment section below.