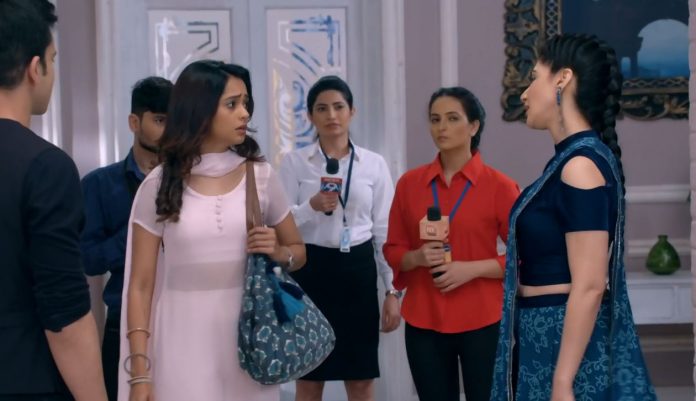 Kumkum Bhagya Accusation twist 14th August 2020 Pragya begs Sanju to leave Prachi. Sanju can’t harm Prachi, whom he loves a lot. He threatens to hurt her. He gets his aides freed and also the money. He makes them leave. He leaves Prachi and runs away. He asks his aides to run quickly with the money. Prachi is worried that Kohlis will doubt her, they will blame her for theft, she can’t prove that someone has robbed her house. Pragya asks her to be strong, she is innocent and can prove it.

Aaliya asks Vikram to check Prachi’s missed call. Vikram tells that maybe she had some work. He calls Prachi. Aaliya asks Rhea to just wait for the moment when everyone hates Prachi. Rhea is hopeful. Pragya and Prachi reach the police station and file a FIR report about the robbery. Inspector tells that he will try his best to find the robbers. Prachi wants to inform Vikram about the robbery.

Meanwhile, Ranbir shares the matter with Aryan. He tells that he went to meet Prachi, but still she isn’t liking him. He wants her to think good about him. Aryan asks him to keep trying. Ranbir wants to speak to Prachi. Rhea wants Ranbir to hate Prachi. She knows that Prachi will never know anything. Prachi thinks how did the thieves get to know about the money. Abhi and Vikram get ready for the office. They have a funny argument. Abhi asks Ranbir to sing his song and become a rockstar. Ranbir asks him not to joke.

Abhi wants him to do everything from heart. The family spends good time. Aaliya asks Vikram to give her 10 lakhs cash, which Sharma sent to them through Prachi. Prachi comes to them to break the shocking news. She sheds tears and makes everyone worried. She tells them about the robbery. She narrates the entire incident. Abhi tells Prachi that its not a big issue if they lost the money. Prachi tells that her family is safe.

Prachi tells them that she had called Vikram to inform him. Vikram doesn’t think she is at fault. He takes the matter lightly. Aaliya accuses Prachi for the theft. Prachi breaks down by the accusation. Pragya stays worried for Prachi. She tells Sarita that maybe Kohlis don’t believe Prachi. Sarita tells them that Prachi is part of Kohli family, she did a lot for them. Pragya still has worries. Abhi doesn’t believe Aaliya.

The media comes there. Aaliya wants to share the news with the media. Ranbir asks Aaliya not to tell anything to the media. Pallavi supports Aaliya. Ranbir is shocked that Pallavi isn’t believing Prachi. Pallavi tells that she likes Prachi, but Aaliya isn’t wrong. Aaliya insults Prachi’s upbringing. Prachi defends her mother. She sheds tears and avoids the media. Abhi asks media to leave. Abhi and Ranbir care for Prachi. Pallavi asks Ranbir to understand that Prachi belongs to middle-class family, she would have stolen the money, being helpless in such a situation. Aaliya tells that she won’t ignore this, she will file a FIR against Prachi. Ranbir feels upset.

Reviewed Rating for this particular episode Kumkum Bhagya Accusation twist 14th August 2020: 3/5
This rating is solely based on the opinion of the writer. You may post your take on the show in the comment section below.