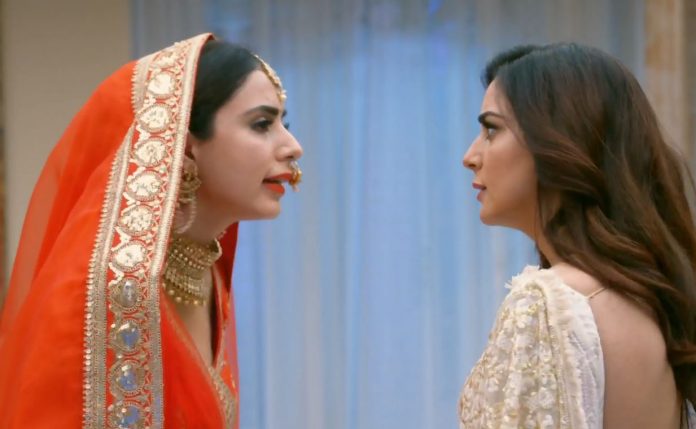 Kundali Bhagya Shocking progress in track 14th August Preeta mentions the different options that she can try to stop the marriage. She realizes that Sherlyn is right, Mahira will marry Karan if she doesn’t do anything. She feels she is still Karan’s legal wife, she can’t see Sherlyn and Mahira ruining the family by attacking Mahesh and Rishabh. She thinks its the best option to save the family by claiming her rights, she should be Luthras bahu and stop the evil from happening. She thinks it will be within her limits and also her rights, none can stop her from claiming her rights on Karan.

She recalls Sarla and Janki’s conversation. She doesn’t want to called an abandoned wife. She wants to be strong and fight for her rights. She is sure that Sarla will always stand by her decision, Sarla will understand her and bless her. Rishabh tells Kareena that Sanjana can’t tell anything about Preeta. Kareena asks him to respect Sanjana. He tells that he never felt to respect her. She tells him that he has to respect Sherlyn and her mom, Sherlyn is a perfect Bahu, who really cares for him. Rishabh realizes that Sherlyn lied to them.

He thinks Sherlyn is connected with the kidnapping conspiracy, so she had lied to his family. He gets angered at her. He thinks if she is hiding the kidnapper from the family. He wants to know her game, which is still a secret for him. He thinks to find the truth. Rakhi asks him to speak to pandit. He wants to confront Sherlyn. Sherlyn chats with Prithvi. She learns that he is safe now. Sanjana tells her about the incident. Sherlyn tells that she knows everything. Rishabh follows Sherlyn. He wants to talk to her and takes her along.

Preeta knows that Sherlyn and Mahira will ruin Luthras completely. She wants to expose their truth. She doesn’t want them to act good and back stab their trust. She decides to not give any right to Mahira to change her fate or snatch her husband. She gets determined to save her family. She decides to stay at the Luthra house and keep her confidence. She goes to Mahira, who dreams of marrying Karan. Preeta tells her that she can never marry Karan. Mahira warns her against coming between Karan and her. Preeta stops her from going to the mandap. She tells that marriage won’t happen. Rishabh confronts Sherlyn about the kidnapping.

He scolds her for lying to him and concealing the truth. He tells that he had a doubt on her, but now he has a proof against her. He asks her why did she get him kidnapped. Mahira asks Preeta if she is drunk. Preeta scolds her for trying hard to get close to Karan. She tells that she is Karan’s legal wife, the marriage can’t happen, she owns the family, house and Karan as well, she holds a right on them.

Reviewed Rating for this particular episode Kundali Bhagya Shocking progress in track 14th August: 3/5
This rating is solely based on the opinion of the writer. You may post your take on the show in the comment section below.