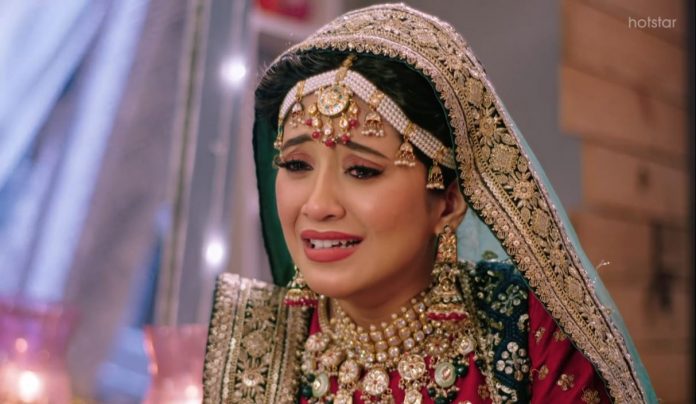 YRKKH Upcoming Kirti entry 14th August 2020 Naira is stressed due to Kartik’s blames. She doesn’t want him to keep silence and hurt her more. She wants him to just speak up and talk out the issue. She apologizes to him. Kartik feels sorry to hurt her. He tells her that he isn’t upset, but scared with the situation’s consequences. He tells that he should have spoken to her before. He hugs her and comforts her. She gets a happy moment, but it turns out to be her dream.

She wishes that her dream turns true and he forgives her for the accident, which wasn’t in her hands. She wants to explain that the family belongs to them, she can never think of putting the family at risk. She sheds tears. Gayu asks her to have the food, since she has ended her fast. Naira refuses to have the food. She tells Gayu that Kartik or anyone else didn’t have food, being in tension about Manish.

She tells that she can’t be in peace until the family gets at peace. She blames herself. Gayu tells that the accident wasn’t in anyone’s control. She asks Naira not to blame herself. Naira wishes that everything gets fine. She is much worried for Kartik. She wants to know the treatment for Manish’s condition. The family also wants to find some solution. They call the doctor home. They await Manish. They think if Manish will come with Kartik or not.

Naira is hopeful that Kartik will bring Manish, who is thinking Kartik is his friend. Kartik manages to get Manish, who holds on his jacket like a kid. Dadi cries a lot. Manish learns Kartik is Kittu. He asks about his name. Dadi tells that he is Mannu. Naira tells that Mannu and Kittu are friends. Manish tells that he will be with Kittu. Kartik gets the doctor home. The family speaks to him about Manish.

The doctor advises them to keep Manish happy and save him from all kinds of stress. He tells that Manish should not get angry on anything, else he may hurt himself in rage. Kartik assures that the family will take care of Manish. Doctor tells them that they should keep patience at all times. Kartik realizes that he has hurt Manish a lot due to his misunderstanding about Soumya, but Manish has always kept patience in dealing with his temper. Kartik promises to deal with Manish patiently. Doctor tells that he will try to find a good treatment plan for Manish to help him recover from the brain injury.

Kartik is hopeful that Manish will recover. Naira finds Kartik too upset. Kartik doesn’t talk to her when she tries to reach him. He avoids her like before. He holds her responsible for the accident. Doctor tells that he will start the part of treatment right away. He prepares an injection for Manish, who gets scared. Kartik and Naira try to convince Manish to get the injection. Kartik fails to convince him.

Naira gets an idea and tells that Manish will follow Kartik’s actions. She knows Kartik is also scared of injections, but puts him in the fix, knowing he can do anything for Manish. Kartik gains strength from Naira and takes the injection, just to convince Manish. Manish too agrees to get the medicine. Naira consoles Suwarna, who breaks down. Suwarna didn’t know this day would come in her life. She wishes Manish stayed fine. Naira tells her that they should be strong and not break down. The girl who got Naira’s purse starts using the cash. She is thankful to Naira for making her life better by ending her poverty.

Akhilesh and Samarth want Kartik to go for the important meeting, which Manish knew about. Kartik wants to be with Manish. They convince him to just attend it. Naira tries to talk to Kartik, but he ignores her in anger. She speaks to her doctor, who gives a good news that Naira can plan her pregnancy. Naira is regretful and refuses to plan a child. She thinks its not the right time, Kartik has to look after Manish first. Kirti’s entry will soon happen in the show.

Reviewed Rating for this particular episode YRKKH Upcoming Kirti entry 14th August 2020: 3/5
This rating is solely based on the opinion of the writer. You may post your take on the show in the comment section below.