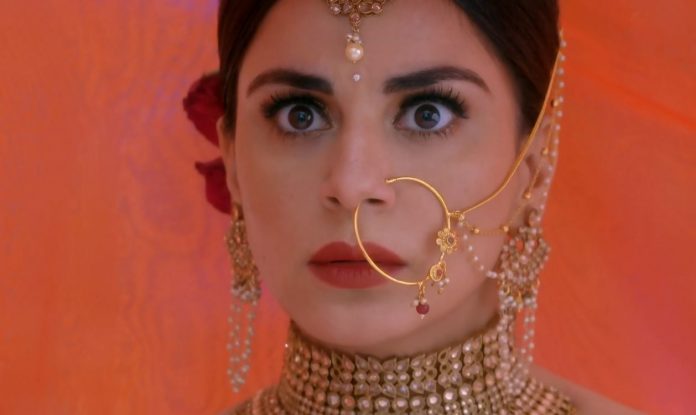 Kundali Bhagya Disguised Preeta marries Karan 18th Aug Preeta gets worried when Mahira faints down. She checks Mahira and finds her pulse normal. Sherlyn comes to pick Mahira so that they can get done with the marriage and then their plan. Preeta tells that Sherlyn and Mahira want to kill Mahesh. She makes a plan to marry Karan to save Luthras. She hides Mahira from Sherlyn. Sherlyn asks Mahira to just open the door. Preeta gets an idea to take the disguise. Sherlyn calms herself down.

She doesn’t want Rishabh to know anything. She scolds Mahira. Preeta gets worried when Sherlyn rebukes her. Sherlyn asks Mahira to tell the truth to her. Karan hugs Mahesh and shares sorrow. Rishabh feels helpless seeing him. Shrishti tells him that they shall find a way to solve the mess. Rishabh tells that Karan isn’t ready to understand Preeta, who is the only one to help them. He asks them to go, he will get Karan to the dais.

Shrishti tells that they shall explain Karan to stop the marriage. Rishabh is ready to stop him, but he knows that Karan will do the reverse. He knows Karan’s stubborn behavior. He suggests them to leave. Shrishti tells Sameer that Karan would faint down and the marriage will stop. Sherlyn scolds Mahira for drinking alcohol. She asks her to apply the perfume, so that none knows about it. Preeta gets saved from Sherlyn’s suspicion.

Rishabh wants Karan to listen to him once. Karan doesn’t want to listen to anyone against the marriage. Preeta worries that she may get caught. She has taken the disguise of Mahira to sit in the mandap as bride. Sherlyn tells that once the marriage happens, Mahira will become Karan’s legal wife and then they will handle Mahesh. Preeta wants to fail her evil. She is ready to do anything to expose Sherlyn’s plan. Meanwhile, Sarla makes prayers for Preeta. She regrets that Preeta got married to Karan, who cheated her and ruined her life.

She wishes that Karan gets some sense and doesn’t hurt Preeta further. She feels Preeta deserves happiness. She wants justice to happen with her daughter. Karan sits in the mandap and waits for his bride. He looks for Preeta also. Kareena tells him that Preeta has left, he shouldn’t leave the mandap and find Preeta. She wants the marriage to happen soon. Karan tells that its his marriage, he wishes Mahesh to witness the marriage.

The family keeps his wish. Rishabh goes to fulfill his request. Preeta thinks she has to marry Karan to save the family’s happiness. Sherlyn tells the family that she covered the bride’s face so that no bad omen occurs. Preeta is taken to the dais. She sits with Karan in the mandap for the second time. Preeta wishes that Karan doesn’t know her truth until the marriage happens.

She doesn’t know the consequences of the marriage. Shrishti awaits Karan to fall unconscious. She messages Rishabh to thank him for his forever support. She feels indebted to him. Rishabh looks for Preeta. He gets Shrishti’s message. He wishes he could do more for Preeta and Shrishti. Mahira exposes Preeta by coming to stop the marriage. The marriage completes by then. Mahira refuses to accept it. Preeta tells that she didn’t do anything wrong, Karan is already her husband. She tells that Karan will always be her husband. Will her faith melt Karan’s heart? Keep reading.