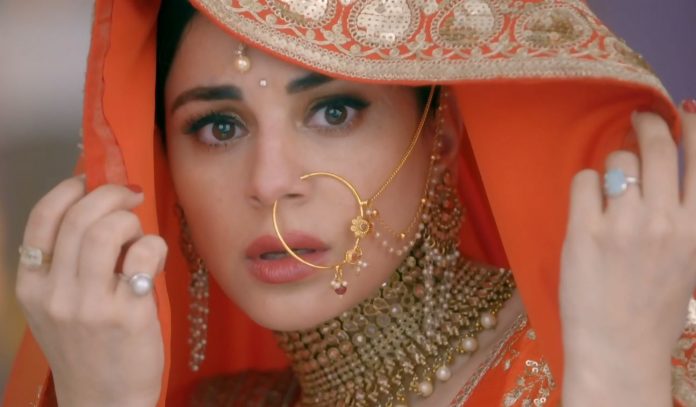 Kundali Bhagya Preview Preeta truth revealed 20th August Karan and Preeta’s marriage rituals go on. Mahira tries to drop a vase and get Sherlyn’s attention. Sherlyn is glad that Prithvi got saved. She calls him up to know if he is fine. Sherlyn hears the sound from Mahira’s room and thinks to check. Sanjana and Kareena are happy that Karan is marrying Mahira. Kareena tells that though they didn’t accept Karan and Preeta’s marriage, but its also legal one, Preeta is his wife and could have claimed her rights on Karan, she could have stopped the marriage by going the legal way.

She wants Karan and Mahira’s marriage rituals to complete soon. Sameer gets juice drink for Karan. He tells that he has got energy drink for Karan so that he stays strong. Dadi permits him. Shrishti falls down and gets to see Preeta as the bride, hiding her face by the veil. She can’t believe the shocking truth.

Nobody else sees Preeta’s face. Rishabh asks Shrishti to take care of herself. Preeta worries for Shrishti. Shrishti doesn’t want Sameer to stop the marriage now, since Karan is marrying Preeta. She wants to tell Sameer that Preeta is the bride, the marriage should complete, Karan shouldn’t drink the spiked drink. Sherlyn speaks to Prithvi. She misses to see Mahira fallen behind the table.

Prithvi tells Sherlyn that he tricked the police and reached home safely. He asks about the marriage. Sherlyn tells that Karan is sitting with his bride in the mandap. Mahira realizes that Preeta took her place. Sherlyn tells Prithvi that Preeta has failed. Shrishti stops Karan from drinking the juice by pushing Sameer. She asks them to continue with the marriage rituals. Rishabh doubts that Shrishti is up to something. Sameer wants to know why did she change her plan. Rishabh takes Shrishti for a talk.

Shrishti wants to be with Preeta. Rishabh asks her the reason for her weird behavior. Shrishti trusts him, but doesn’t tell that Preeta is the bride. She gets happy that Preeta sat in the mandap willingly since she has realized her love for Karan. Sameer finds her smiling and thinks what happened to her. Shrishti thinks Preeta has taken Mahira’s place, but Mahira can come to the mandap anytime. She realizes that Preeta fought with Mahira and locked her in the room. She decides to stop Sherlyn and Mahira from reaching the mandap.

Kareena stops Sameer from going after Shrishti. She thinks Preeta would be crying to see Karan and Mahira’s marriage. She asks him to stay with Karan. Prithvi tells Sherlyn that he wants Karan and Mahira to marry, so that Preeta gets freed. She scolds him for fooling her. She tells that she will kill Preeta. Prithvi asks her not to dare. Shrishti finds Mahira trying to alert Sherlyn. She goes to mislead Sherlyn.

Preeta thinks Karan is much different, they are destined to marry. She worries that Karan may not accept the marriage again. Shrishti tricks Sherlyn by faking a call. Sherlyn gets shocked knowing Preeta is spying in her room. She runs to her room. Shrishti finds Mahira leaving the room. She wants to hit her and stop her. She hits on Mahira’s head to faint her for some more time. Mahira faints down.

Karan and Preeta take the wedding rounds. Karan is upset to marry Mahira and misses Preeta. Sanjana knows that Preeta is a big threat for Sherlyn. Shrishti hides Mahira in the room. Sherlyn doesn’t find Preeta in her room. She thinks why did Shrishti lie to her, what is Preeta planning. Bani asks Sherlyn to go to attend the marriage. She tells that Preeta is nowhere. Sherlyn tells that she is tensed that something wrong is going to happen. Preeta wishes this marriage stays for seven births.

Reviewed Rating for this particular episode Kundali Bhagya Preview Preeta truth revealed 20th August: 4/5
This rating is solely based on the opinion of the writer. You may post your take on the show in the comment section below.