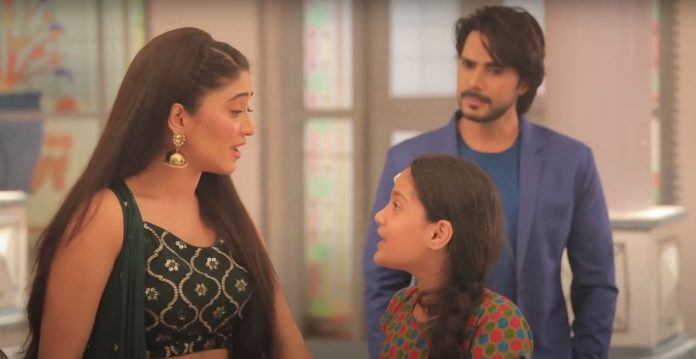 YRKKH Spoiler 20th August Goenkas meet Kaira aka Chori The girl Chori meets Goenkas. She likes the lavish house. She sits on the soft sofa and jumps on it. She tells that their house is really nice. Dadi asks her to stop it and tell her how does she know Naira. Chori tells them that she knows Naira since the day they met at the traffic signal.

Dadi asks how did she get hurt when Kartik and Naira held her before she hit the ground. Dadi asks Naira to give some food and medicines to the girl and send her away. Naira takes care of the girl. The girl likes the juice. She doesn’t want the medicine. Naira knows that Chori is doing a drama. She asks her to have food and then leave from the house. She doesn’t know anyone to know that accident happened because of her. Chori asks will everyone scold her. Naira tells that she doesn’t want to tell anyone.

Naira asks her how did she get into her car, when her parents came to take her. Chori tells that the couple wasn’t her family, they wanted to kidnap her. She reveals that she has no family, she is an orphan. She asks Naira to forget those people. Naira asks her what is she hiding. Chori gets glad to see tasty food. Naira asks her to finish it and leave. She knows that Dadi is irritated by the girl and wants her out. Chori likes Naira and doesn’t want to leave her.

Reviewed Rating for this particular episode YRKKH Spoiler 20th August Goenkas meet Kaira aka Chori: 4/5
This rating is solely based on the opinion of the writer. You may post your take on the show in the comment section below.