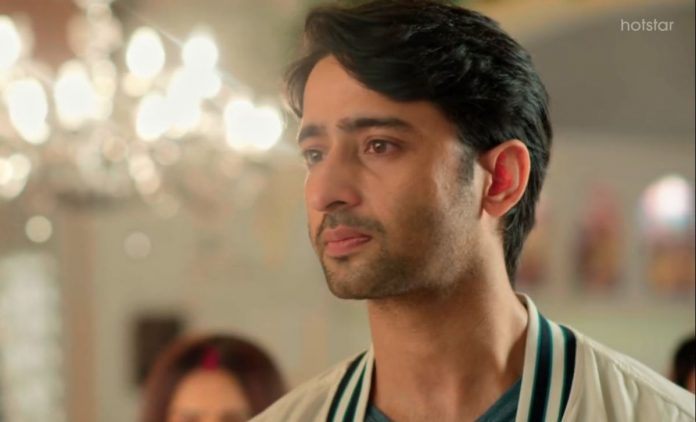 Rishte Pyaar Star Plus Twists upcoming next week Meenakshi is much raging after losing her sons to Maheshwaris. She learns that Kuhu and Mishti had a fight, which Parul had hidden from her. Parul tells that she didn’t know that the fight will result in such a worse thing. Meenakshi tells her that Abir and Kunal have left the house and went to Maheshwari Sadan to reside there. She tells that its the worst day of her life to see her sons staying with their in-laws, just because they are fed up of their wives’ fights.

She wishes that Kuhu and Mishti could handle their relationships well. She tells Parul that its wrong to hide the fights, she could have taken some action and stopped her sons from leaving. Parul apologizes to hide the matter from her. She also wanted the peace in the house. Abir tells that Kunal wasn’t ready to leave the house, but he convinced him.

He tells that he is much tired of Kuhu and Mishti’s everyday fights. Vishwamber and Rajshri tell him that Meenakshi is upset with them, its not a good thing to hurt a mother’s heart. They ask Abir to talk to Meenakshi and explain her. Abir and Kunal try to please Meenakshi by doing the official work before time. Meenakshi knows that both her sons are the best in their work, they can never disappoint her when it comes to their company.

She wants them home before the society knows the news of their leaving. She feels Kuhu and Mishti are inviting troubles for the family. She doesn’t want her family to become a fun topic for the neighborhood. Kuhu and Mishti return home and try to hide from Meenakshi. Meenakshi doesn’t give them a chance to speak. She blames them for the situation. She asks them to get her sons back home if they want to stay. She threatens to oust them.

Kuhu and Mishti get scared of her anger. Mishti feels sorry seeing Abir’s picture. She thinks Abir wanted to plan a child, but now he got distant from her due to the ongoing problems. She wants to talk to Abir and request him to come back. Meenakshi praises Kunal’s work. She asks Parul to explain Kuhu to mend her ways. Abir helps Rajshri in her work. He asks about Kuhu and Mishti’s bad relationship.

Rajshri praises Mishti for always suppressing her feelings and not commanding over the family. She tells that Kuhu always kept her demands, since she felt her right on the family, unlike Mishti. Varsha narrates the same incident to Kunal. Jasmeet tells that Kuhu didn’t break the doll house, but it was Mishti’s mistake. Kunal gets fed up that Jasmeet is again after Mishti. He wants to find a way to unite Kuhu and Mishti. Abir too thinks to sort Kuhu and Mishti’s fights by making them realize their strange connection.

Varsha requests Kunal to return home to be with his mother, who needs him a lot. Kunal wants Abir to talk to Meenakshi. Abir calls up Meenakshi to inform her that he isn’t coming back home so soon until Kuhu and Mishti’s fights come to an end. Meenakshi just wants to know if she can expect her sons home. Abir doesn’t listen to her. He tells that she shouldn’t feel guilty, she isn’t involved in their matter. Meenakshi feels bad. She thinks Kuhu and Mishti are snatching her sons in this indirect way.

She calls Vishwamber to threaten him that she will send Kuhu and Mishti home if he fails to convince her sons to return to Rajvansh family. Vishwamber tells that Abir and Kunal came by their own will, he can’t throw them out by getting mean. She tells that she can throw his daughters out of her house if needed. She asks him to take her warning seriously. Vishwamber calls Mishti to fix a meet. He wants to solve this soon. Mishti has already heard Meenakshi’s threatening.

She feels sorry that her family is paying for the fights. Vishwamber meets Mishti and tells her that he will have to apologize to Meenakshi since his daughters have ashamed him. He asks Mishti not to burden Abir by such problems. Mishti tells that her ego isn’t so big that she brings disgrace for him. She promises to fix the problems. She tells him that she will speak to Kuhu and sort the issues. She tells that they will convince Abir and Kunal to return home.

In the upcoming episodes next week, Mishti and Kuhu try to sort things and reach Maheshwari family. They apologize to Abir and Kunal. Kuhu finds an excuse to fight with Mishti. The fights get increasing. They get kicked out from their Maayka and Sasural. Kuhu and Mishti fall into a terrible situation. Will they realize their mistake? Keep reading.

Reviewed Rating for this particular episode Rishte Pyaar Star Plus Twists upcoming next week: 5/5
This rating is solely based on the opinion of the writer. You may post your take on the show in the comment section below.