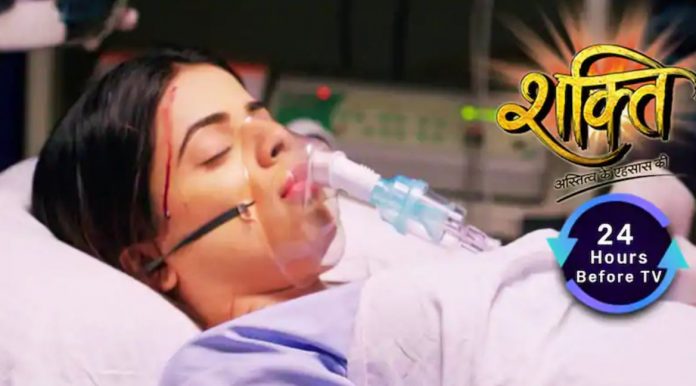 Shakti Voot Spoiler Virat turns savior for critical Heer 26th August 2020 Update Virat apologizes to Gurvinder for his misbehavior. She forgives him. He makes her rest and does the cooking to help her. Gurvinder asks him to leave it. He makes the tea especially for her. He cheers her up. He gets glad that their relation is like before. Nutan comes home to confront Virat about Heer’s kidnapping. Parmeet asks her why did she come.

Sant asks the motive. Nutan informs them about Heer’s accident. She tells that Virat is responsible for the accident. Daljeet threatens to arrest her. Nutan summons Virat and loses her cool. Virat meets her and asks the reason for her coming. Nutan tells him that he is behind Heer’s accident. He tells her that he was at home. Nutan informs him about Heer’s critical state, she is admitted in the hospital. He asks her to find the real culprit.

She asks him not to stoop low. She blames him. She tells him that if Heer dies, then she will ruin his life. She promises to take revenge on him. Virat is also worried for Heer, but his feelings change due to his hatred. He stays angry on Heer. He threatens Nutan. Nutan fumes over him. Singh family gets worried for Heer. Doctor informs them that Heer is really critical. Soham knows that the family would be worried to hide Heer’s secret.

Furthermore, Jharna meets Virat and learns about Heer’s accident. Gurvinder asks Virat if he is really behind the accident, since he threatened to kill her. Virat wants to defend himself. Parmeet asks Gurvinder not to blame Virat. Gurvinder tells that Virat can’t harm someone’s life. Parmeet recalls Virat’s threatening words. She has made Daljeet execute the accident to kill Heer. She acts in front of the family.

Just Parmeet and Daljeet know the truth. They act and tell that they will try to help Heer. Virat tells that he doesn’t care for Heer’s life, there is no need to find out who has knocked her down. Jharna tells Virat that she has shared her engagement news with her friends. Sant realizes Daljeet is behind the crime. He reminds that half murder is more dangerous than the murder crime. He asks Daljeet why did he leave Heer alive.

He tells Parmeet that he knew she is also involved. Parmeet tells Daljeet that Heer shouldn’t survive. Sant tells that Heer will get them into trouble if she gets saved. He asks Daljeet to kill her. The family worries for Heer and pray for her recovery. They get bothered when a man creates a scene and asks Harak if there is some secret they are hiding about Heer. Soham bashes up the man, after Harak threatens the man.

Shanno enjoys the drama. Rohan calms down Harak and Soham. Heer’s operation gets over. The doctor reveals her condition to the family. He tells that Heer should get conscious else she will be losing her life. Harak and Preeto go to meet Heer and find her unconscious. Virat comes to meet Heer. He catches Daljeet who attempts to kill Heer. Virat bashes up Daljeet and tries to unmask him. Will Virat learn Daljeet’s ugly truth? Will Heer die? Keep reading.

Reviewed Rating for this particular episode Shakti Voot Spoiler Virat turns savior for critical Heer: 5/5
This rating is solely based on the opinion of the writer. You may post your take on the show in the comment section below.