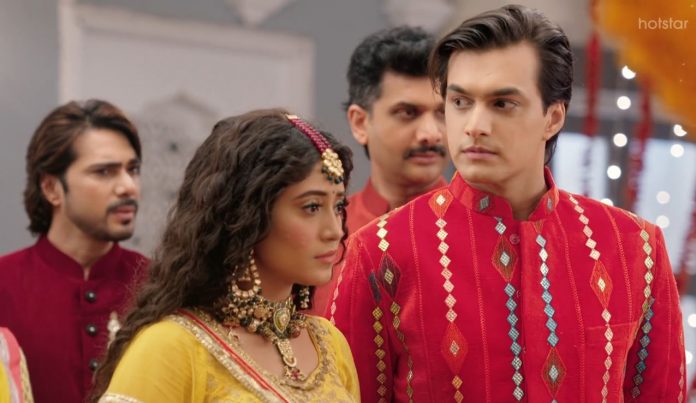 YRKKH Biggest revelation for Goenkas 25th August 2020 Manish feels much hungry and asks for food. Kartik feels sorry to not pay attention to him. Naira comes to rescue. Manish asks for noodles. Naira goes to prepare noodles for him. Chori also feels hungry. She gets glad to see the sweets kept in the temple. She thinks to mislead Dadi if she is caught with the sweets.

She takes some sweets, and comes across Naira. She makes a mistake and takes the Krishna idol along with the sweets. Naira questions her if she is stealing something. Chori tells that she is just taking flowers to decorate the swing. Naira gives her new clothes for the puja. She goes on Suwarna’s call. Chori gets relieved that there is no one to see her. She eats the sweets, sitting alone. Manish takes the sweets form her. They have a laugh.

Dadi cries aloud on seeing the idol missing. Chori gets worried when she finds the idol in the flower basket. She thinks she made a big mistake and just Naira can help her. Dadi calls it a bad omen. The family wonders who has taken the idol. Dadi tells that she made the gold idol on Guru ji’s words, Chori have stolen the idol to sell and make money. Chori shows the idol to Naira. Naira makes an excuse and goes to take the idol from Chori.

Moreover, Dadi scolds Chori. Chori defends herself. She tells that she got the idol by mistake. Naira asks her to apologize to everyone. Dadi gets happy when she gets the idol back. She reprimands Chori for stealing the idol and breaking their trust. Dadi asks them to throw out the thief. Naira and Kartik defend the girl.

Chori gets happy that Kartik has supported her. She gives an answer to Dadi. The moment gets hilarious. Naira recalls her childhood seeing Chori. She feels connected to her. The family gets impressed with Chori’s hardwork and decorations. Chori asks them to praise her talent more. Kartik pays the money for the work. Chori shares the money with Manish, who helped her. Kartik angrily asks her not to involve Manish in the work next time. Kartik warns Chori. The Goenkas perform the puja turn by turn. Kartik prays for his dad’s recovery.

Similarly, Naira wishes the same that the family gets peace and joy back. Kartik prays that like he met Kairav, Chori also meets her family. Naira also prays that Chori gets her family back. She gets Sudha’s call from a child NGO. She learns that Sudha knows Chori and wants to pick her up. Naira agrees to send away Chori, but feels sad. Chori finds Sudha too stern and doesn’t want to live under limits. She wants to run away before Sudha arrives.

Consequently, Sudha recalls the night when Anil left Chori to the ashram. It gets revealed that Chori is Kartik and Naira’s daughter. Chori wishes to get a family like Goenkas. Dadi makes Kanha’s foot impressions, while Chori’s foot impressions are left on the floor. Manish finds Chori escaping and goes to stop her. Kartik and Naira are about to get the biggest surprise of their life, in the form of Kaira’s return.

Reviewed Rating for this particular episode YRKKH Biggest revelation for Goenkas 25th August 2020: 5/5
This rating is solely based on the opinion of the writer. You may post your take on the show in the comment section below. 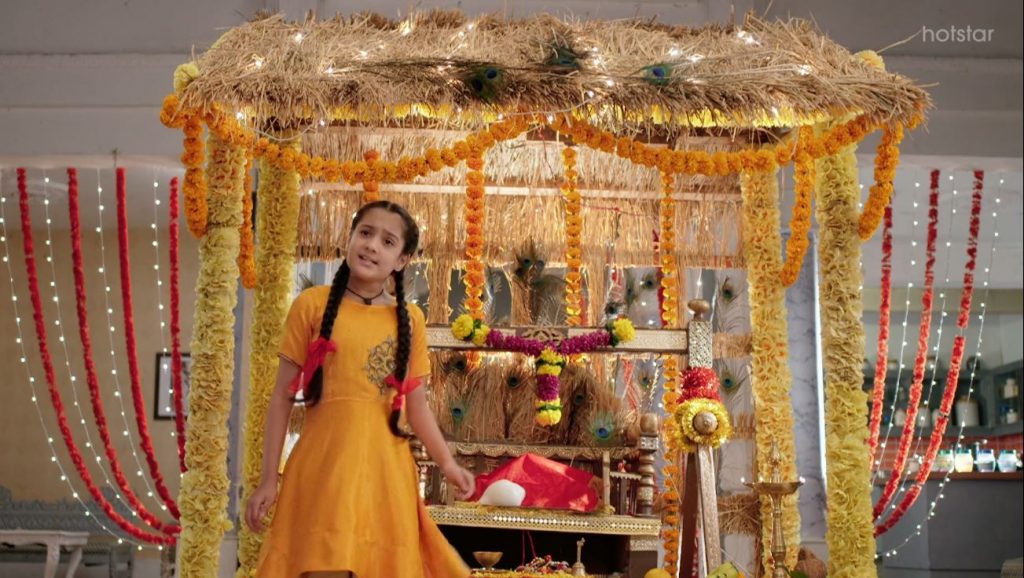