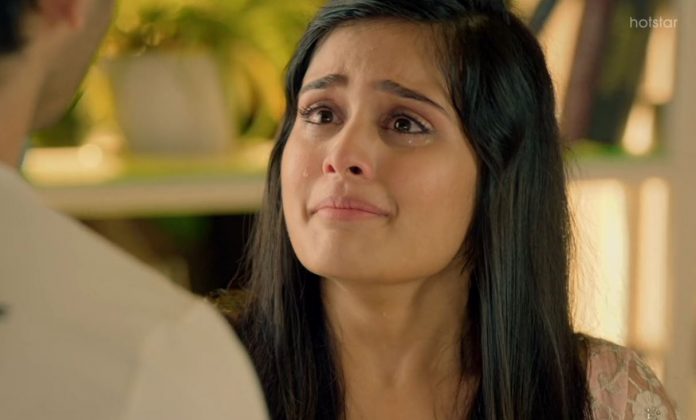 Rishtey Pyaar Tonight Mishti collapses 31st August 2020 Abir doesn’t think Mishti will be able to tolerate the harsh truth. He worriedly runs to Mishti on finding her hurt. She asks him not to overreact, she is totally fine, she isn’t pregnant that she can’t step down. She asks him not to stress up. She promises to look after herself in the best way possible when she gets pregnant with his baby.

Abir feels sorrowful and repents a lot to lie to her. He thinks he is giving her false hopes. He doesn’t want to hurt her feelings. She is very happy and excited. She feels Abir understands her really well, Abir knew that she should think of motherhood and suggested that they plan a baby. She tells him that she is lucky to have such an understanding life partner. Abir thinks he has done wrong by asking her for a baby.

On the other hand, Meenakshi is shattered with the thought that her family won’t get the heir, Abir’s child, all because of Mishti’s weaknesses. She regrets the fact that she couldn’t protect Mishti and lost Abir’s huge happiness. She misses Abir’s childhood while seeing the pictures. She wanted to give much love to her grandchild and make up for all her mistakes. She regrets that she won’t be able to see that day.

Furthermore, Parul finds her broken down and asks the reason. She tries to help Meenakshi by her pacifying words. She is much thankful to Meenakshi, who gave her security, respect and happiness. She can’t ask for more, after Mehul’s big deceive. She counts Meenakshi’s favors on Kunal and her. On the other hand, Kunal is troubled by Kuhu’s competitive nature. He realizes that Kuhu has got brainwashed by Jasmeet again. Kuhu tells him that Meenakshi can’t give away the business share to Abir and Mishti’s baby.

She wants Kunal to get his share in property and business. She fears that Meenakshi will give away the house to Abir as well. She asks Kunal to act before its too late. Kunal has no interest in property or business. He asks Kuhu not to make the pregnancy a marathon race. He tells that Mishti isn’t competing with her, so even she shouldn’t get back to her selfish side. He tries to put sense in her mind. He wants her to stay away from Jasmeet, knowing the latter fills such junk in her mind.

Kuhu is upset that Abir and Mishti’s baby is getting everything before the birth. He leaves Kuhu alone. He meets Mishti and finds her excited about the baby. Mishti shares her happiness with Kunal. Kunal also speaks his heart out. He tells her that he has seen Meenakshi’s hardships and wanted to help her by sharing her load. He wanted to join the office soon after completing his studies so that he eases Meenakshi’s life. He tells that he never wanted to make his career or loved his work, all he wanted to do was to help his mother.

He expresses his feelings that he really loves Meenakshi a lot and respects her struggles in raising Abir and him so well. He gives his life’s success credit to Meenakshi. Seeing a doting son, Mishti wishes that even her baby become as lucky as Kunal. She tells him that he is lucky to get a caring family. He tells her that baby will be more lucky to get a father like Abir. He adds that Abir has always been a fatherly figure for him, that’s the reason that he never wanted to find Mehul. He tells that Abir missed their dad a lot and wanted to find him, but there was no such need felt in his life.

He respects and loves Abir equally as Meenakshi. Abir overhears the emotional talks. He gets happy to know it. He is also sad for Mishti, who is dreaming to get the baby in their lives. Abir doesn’t know how will she react when he makes her face the truth. Mishti feels the baby will keep the family united, since just the thought of conception is bringing much positivity in the house. Mishti is sure that Kuhu will also change for the good once the baby comes. Kunal and Kuhu visit Maheshwaris. Varsha and Jasmeet advice Kuhu to plan a baby and end the insecurities. Varsha asks Kuhu not to fight with Kunal.

Rishtey Pyaar Tonight Mishti collapses in the weak moment. Kunal doesn’t want to plan a baby to compete with others. He wants to focus on his work. Kuhu fears that he will lose his business and just work as an employee in the company. Her insecurities start growing. Abir and Mishti recall their life’s journey while spending time at the NGO. He tries to change her mind about the baby’s plan. He tells her that he isn’t ready to take up the responsibility, he has realized that they won’t be able to share any time together once they get the huge responsibility on themselves.

He asks Mishti to delay the baby’s plan for time-being. Mishti realizes that his sudden change of decision is related to something. She enquires about her medical reports. He doesn’t want her to know it. He lies to her to keep her away from the truth. Mishti tells him that she suspects him to be hiding something crucial. She decides to talk to her doctor. He stops her and admits that she can never achieve motherhood. Mishti is super shocked to know about her internal injuries, which make her lose the chances of conceiving and carrying a child in her womb. Mishti collapses down.

Abir tries to give her courage to withstand the truth. Mishti blames herself for ruining his happiness. She feels unsuitable for Abir. She is guilty to break his dreams. She wants to end her life and get away from Abir. She gets depressed and goes away from Abir. Meenakshi doesn’t want injustice to happen with Abir. She wants Abir’s child to come into the world. She tells that she will try everything to get the family heir. What will Meenakshi do to make Mishti give them the family heir? Keep reading.

Reviewed Rating for this particular episode Rishtey Pyaar Tonight Mishti collapses 31st August 2020: 4/5
This rating is solely based on the opinion of the writer. You may post your take on the show in the comment section below.