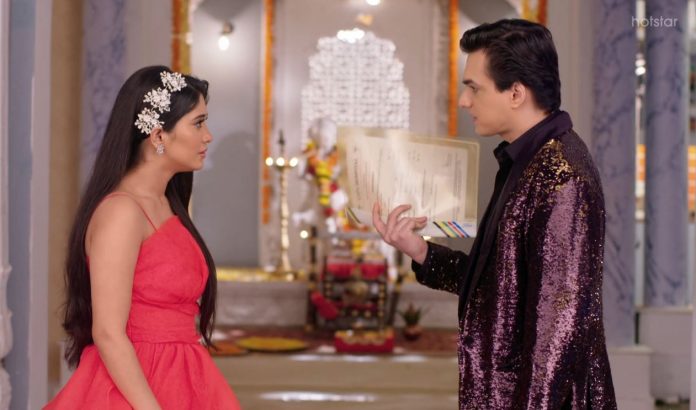 YRKKH Kaira Ugly clash Naira shocking decision 1st September 2020 Chori is ready to apologize to Kairav. She doesn’t want Naira’s birthday to spoil. Naira feels bad for her. She doesn’t want to celebrate the birthday by upsetting the kids. Kartik wants to celebrate for the sake of the family. Naira cuts the cake and tells that she will keep it for Manish. Kartik and Naira have celebrations with the family.

Chori feels like an outsider. She wishes to become their family. Naira gets surprised when Naksh and entire family gift Naira a special performance. Naira dances with the family in a jolly mood. Naira receives a special gift from Kartik. Her happiness doubles on seeing the gift. She dreams of Kartik’s romance. She doesn’t want Kartik to get estranged. They have a sweet dance in her imagination.

The family gets a shock when the Doctor arrives with a bad news about Manish’s condition. He tells that Manish’s reports are scary, they should decide to perform the surgery, else Manish may suffer a memory loss. He makes the family realize the dire consequences. He tells that they should choose the surgery option, even if there is risk, there is also a possibility of Manish’s normalcy. The family gets convinced by the doctor.

They want the surgery option for Manish. Kartik disagrees with them, knowing the high risk involved. Kartik tells them that he is happy that Manish is alive, he is between them, he doesn’t want to get greedy for his recovery and lose him forever. He adds that the surgery can harmful for Manish and cost his life. He decides to not choose the surgery option, knowing Manish may die if the surgery goes wrong.

The family asks him to be positive and let them speak to the best doctor’s team. Kartik doesn’t get convinced. His fear of losing Manish get intensified. Doctor asks them to take a final decision and inform him. Kartik doesn’t want anyone to decide when he is there to look after Manish. Suwarna tries hard to convince him. Naira asks him to think of Suwarna, Dadi and others, who also have big right on Manish’s life.

She asks Kartik to think of other relations than superimposing his decision on them by showing his sole right on his dad. She wants him to not get selfish. She advises him to think of Manish’s condition, how unstable he is and might fall in risk in future. She wants to get Manish treated for his better life. She tells that every day is tough for them to see Manish in an unstable state. She asks Kartik to free Manish from the pain by agreeing for the surgery. She assures that they will meet the best surgeons and get the best treatment for Manish.

She explains that they should not delay the process. He loses his cool. He tells Naira that he isn’t scared of the surgery, but of losing Manish. He taunts that Manish isn’t her dad, she can’t understand their pain. Naira confronts him for the taunts. She doesn’t want him to always blame her for the accident. She tells that she always think of the family. She asks Kartik to define her relations with his family and him. She tells that she will not tolerate the taunts if she isn’t wring. She gets against Kartik, who has hurt her esteem.

She tells Kartik that if he doesn’t regard any relation between them, then it makes no sense that she lives in Goenka mansion. She scolds him for always getting estranged towards her, whenever he faces some problem. She asks him not to hurt her heart and know her real intentions. Kartik doesn’t have interest in hearing her lecture. He asks her to finish it off and leave. Naira decides to leave the house so that Kartik realizes his mistake. Both the families support Naira, knowing she is innocent. They find Kartik at fault for not understanding Naira’s sentiments and hurting her every day by his indifference. Will Kartik realize his mistake? Keep reading.

Reviewed Rating for this particular episode YRKKH Kaira Ugly clash Naira shocking decision: 2/5
This rating is solely based on the opinion of the writer. You may post your take on the show in the comment section below.