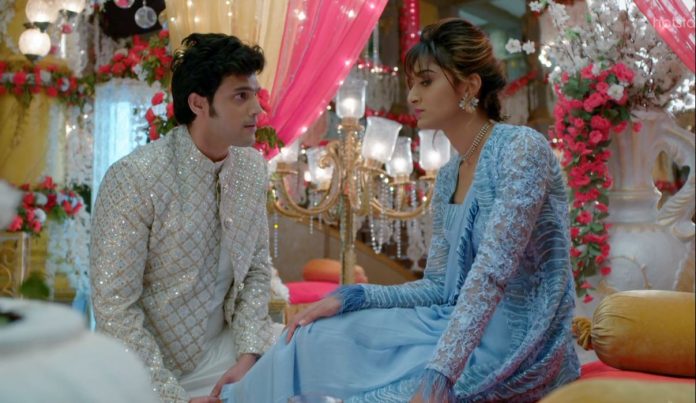 Kasautii Most awaited moment of Anurag Prerna coming Komolika gets raging when she finds Samidha bringing Anurag and Prerna closer. She doesn’t want Anurag to bond with Prerna as before. She thinks if Anurag tends towards his old love, then she will not spare Prerna. Samidha insists Anurag to give a rose to Prerna. Anurag gets polite, while Prerna isn’t any mood to forgive him, knowing he has passed the demolition orders.

Prerna goes to attend the guests. Komolika tries to make Prerna jealous by getting Anurag’s name in her mehendi design, as suggested by Mohini. On the other hand, Monu is worried that Kaushik is falling for Kuki and may reveal the exam papers leak scam to her. He compels Kaushik to accept his feelings. Kaushik confesses that he is in love with Kuki. Kuki overhears their conversation. She learns Kaushik’s feelings for her.

She blushes and feels happy. She thinks she also has feelings for Kaushik. Kaushik tells Monu that he finds Kuki dealing with some sorrow. He wants to lessen her sorrow, since he can’t see her tears. Kuki gets touched by his confession. Meanwhile, Komolika finds Shivani showing her love for Ronit. She wants Ronit to fake express love to blind Shivani further. She messages Ronit to make him charm Shivani by his love. She wants him to be convincing in his drama.

Ronit joins Shivani in the mehendi function. He gets Shivani’s name written on his hand. He pleases Shivani. Shivani feels lucky to get him. Moloy suspects Komolika’s intentions when he finds her messaging Ronit and directing his drama. He thinks if Komolika is making Ronit fake love for Shivani. He wants a proof to expose Komolika and Ronit. He fools Mohini and Ronit to steal the latter’s phone. Ronit gets to see his ex Shilpa and turns upset. Komolika finds his expressions changing. She wants to ask him about Shilpa.

Moloy takes the phone to check the messages. He rushes to Kaushik. Anurag and Prerna meet in the storeroom. She gets hurt by a thorn and falls down. Anurag rushes to look after her wound. He tells her that she needs to believe his knowledge, he knows the flower and also its poisonous thorn. He removes the thorn. He gets emotional. He faces her hatred. He tells her that he needs her time to tell her the reason of deceive. He wants to put the entire truth in front of her. Anurag and Prerna’s most-awaited moment is about to happen in the next episode. Keep reading.

Reviewed Rating for this particular episode Kasautii Most awaited moment of Anurag Prerna coming: 2/5
This rating is solely based on the opinion of the writer. You may post your take on the show in the comment section below.