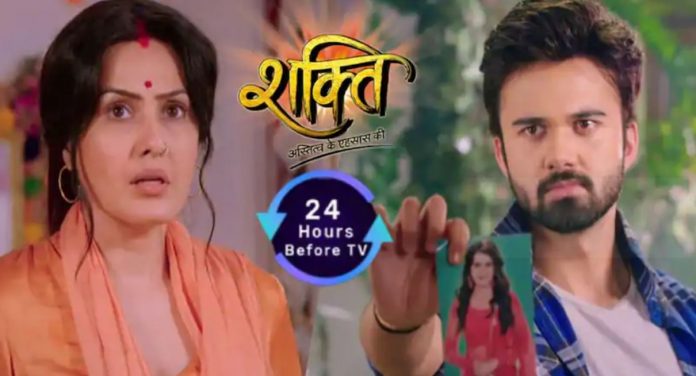 Shakti 3rd September Preview Preeto slaps Soham Heer pays money to the kinners and tells them that she doesn’t hate them, they are lovely. She hugs them. Kareena recalls Soham’s words. She wants her revenge on Heer. She asks Heer to give them an icecream treat. Heer tells them that she is much hurt because of an accident, she can’t come with them. The kinners lie to take her along. Heer feels uncomfortable when they catch her. Preeto witnesses a bad omen when an approaching storm strikes.

Kareena takes Heer to have icecream with them. Heer’s absence worries Preeto. Harak asks Preeto why is she worried. Preeto tells him that Heer is in some deep trouble. Harak pacifies her. Shanno knows that Heer is gone from their lives forever. Rohan comes home when Preeto gets restless. Rohan tells them that Shanno called him and sent him to the market. Shanno makes excuses. Rohan tells that Heer wasn’t there when he returned.

Preeto madly runs to find Heer. Heer recalls that someone tried to cheat the family by feeding them icecreams and making them unconscious. Soumya had taught her not to accept anything from strangers. Heer feels she should be alert. She throws the icecreams. She tries to find out the truth. She realizes that the kinners are trapping her. She runs away. The kinners catch her to take her along to their house.

Soham doesn’t find Heer and think they have taken Heer by now. He gets happy. Heer asks Kareena where are they taking her and why. Kareena tells that her answer would leave her shocked. Saaya comes to Heer’s rescue. She protects Heer from the evil kinners. Heer asks Saaya/Mallika to help her. Kareena argues with Mallika. She tells that she has also become Gurumaa now and leads a team. She isn’t scared of Mallika. Mallika doesn’t want Kareena to tell the truth to Heer. She tells that Kareena is Soumya’s enemy. She warns Kareena.

Kareena challenges her. Mallika fights with them. She succeeds to save Heer. Harak, Preeta and family find Mallika saving Heer and bringing her safely. Preeto asks Mallika where did she find Heer. Mallika tells that Soumya’s old enemies have attacked Heer. Heer tells that she is fine, but didn’t understand about the kinners’ enmity. She reveals that Rohan left her on Shanno’s call, then Soham convinced her to come along and left her on the way to get water for the hot engine. Preeto sends Heer home. Preeto gets reminded of Kareena.

She asks how can Kareena know that Heer is a kinner. Mallika tells that maybe someone works for Kareena. Mallika asks her to be alert. Preeto suspects that Shanno and Soham are involved. Mallika asks her to handle the family. Parmeet tortures Gurvinder on the name of rituals again. Virat comes home, unaware of the madness happening in his house. Soham returns home and tries to find out if Heer has disappeared. Shanno thinks they finally got rid of Heer.

Heer comes home with family. Soham is shocked to see her. Preeto slaps Soham when he makes excuses. She tells him that Soham and Rohan won’t take Heer out if they can’t protect her. She wants to safeguard Heer. Soham gets revengeful. Kareena sends Rani in the house while Singh family celebrates happily. Shanno helps Rani in kidnapping Heer.

Reviewed Rating for this particular episode Shakti 3rd September Preview Preeto slaps Soham: 4/5
This rating is solely based on the opinion of the writer. You may post your take on the show in the comment section below.