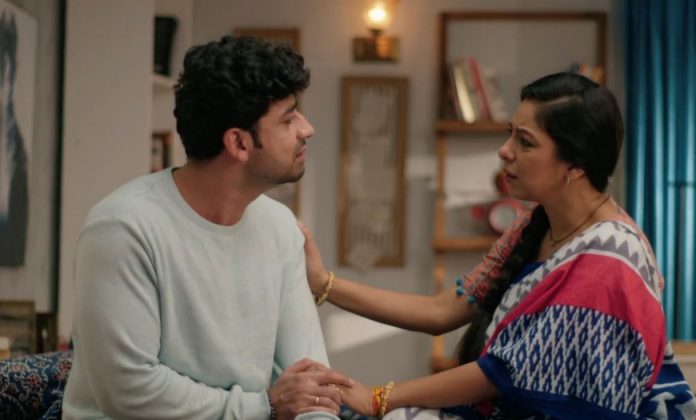 Anupama Tellyreviews Paritosh depressing revelation 4th Sept 2020 Vanraj tries to confront Paritosh. He is much enraged after hearing the entire incident from Baa. Anupama finds Vanraj coming to meet Paritosh. She knows that Paritosh isn’t any a state to answer Vanraj. She stops Vanraj, while he wants her to let him go. She tells him about Paritosh’s move to take the sleeping pills.

Vanraj gets devastated on seeing the sleeping pills. All of his anger ends in a moment. He gets sorrowful and isn’t able to shed tears. He has much pain in his heart. She knows his sorrow. She cries out his sorrow from her eyes. He tells her that he never acted odd like Paritosh even when he was against his parents for few things. He tells Anupama that they have failed as parents, they couldn’t give the right upbringing to their son.

Baa asks Vanraj to control his anger and not hurt Paritosh. She doesn’t want Paritosh to take a wrong step for which they regret all their lives. Anupama takes the responsibility of her son. She tells Vanraj that she will explain Paritosh with love, she is his mum and will do the needful. Vanraj doesn’t know how to trust her.

She asks him to trust the mother in her. She is sure to handle her son. He regrets that he always trusted her and even then she couldn’t look after his children. He tells her that he always does his work in running the house, but she couldn’t make a place for herself in her children’s heart. He asks her to work as a mother and try to fix up the issues. He gives her 24 hours to prove herself.

He tells her that once the time passes, then he will handle the matter in his way. He doesn’t want her to interfere in his plan. She realizes that its her last chance. Anupama accepts his challenge. Meanwhile, Anirudh and Kavya have a moment. Kavya rebukes him for reminding the past. She tells him that he is her past. He tells her that she can’t be a second wife for Vanraj. He tells that he can’t let her live as the other woman in Vanraj’s life.

He tells that they aren’t yet divorced, he will not lose her, he will not let Vanraj win. He promises to work hard to keep their relation going. Later, Anupama caresses Paritosh. She tells him that Vanraj gave her 24 hours to fix the problem, she can do anything for her son. She wants to find a solution to pacify him. She takes care of him. When he wakes up, he realizes his huge mistake. He breaks down and apologizes to Anupama. She forgives him since he has realized his mistake.

tells him that they have to move on in life, whatever problems they face, they can’t fall weak. She reminds him that he never lost hope and never cried on any defeat. She asks him to keep up the same spirit and hope. She tells him that the family loves him a lot, even Vanraj loves him but doesn’t show it. She tells that she will make Kinjal her bahu soon. She takes up the responsibility. She asks Paritosh to give her some time to fix the alliance. She explains that things take time and one has to keep patience.

He pours his heart out. He cries out that he is falling weak, like a darkness is sinking him. He can’t live without Kinjal. He tells Anupama that he is feeling depressed, he doesn’t want to lose his normal life. He asks Anupama to save his happiness and also his life. He expresses his weak tendency and expects Anupama to help him. Anupama feels much bad for him. She decides to meet Rakhi and request her to consider the alliance again. Rakhi remembers the insult and wants revenge on Anupama. Keep reading and do watch the episode in pics below.

Reviewed Rating for this particular episode Anupama Tellyreviews Paritosh depressing revelation: 4/5
This rating is solely based on the opinion of the writer. You may post your take on the show in the comment section below.