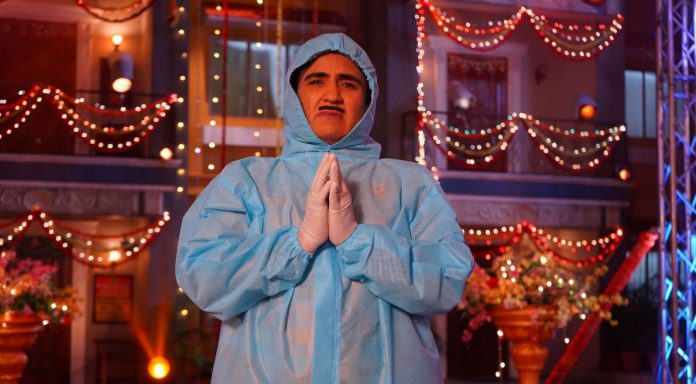 Taarak Mehta Ka Ooltah Chashmah Jethalal amazing act Next Up In Gokuldhaam Society’s Rangarang Karyakram – Quizzes, An Act On Unity In Diversity & A Fusion Dance Performance Sept 08, 2020: The upcoming episodes of Neela Film Productions Private Limited’s Taarak Mehta Ka Ooltah Chashmah (TMKOC) will see a range of performances that will excite, entice and energize viewers. Bhide has planned to get everyone involved in his bit for the Rangarang Krayakram.

He has prepared a set of questions, quiz actually, about and around Ganapati Bappa which he plans to put forth to everyone in the Society. The fastest finger to press the buzzer gets to answer the question. Of course, Bhide is a teacher and the questions are not going to simple but it’ll be fun to know who knows how much about the festival.

Bagha and Abdul too have a performance queued up and it’s going to be dedicated to Unity in Diversity. This performance will definitely strike a chord with viewers who believe that India’s real strength in unity lies strongly rooted in its diversity and respect for everyone irrespective of which faiths they belong to. This unity brings us together as friends which is the strongest of all relationships.

And then, the performance that Jethaalal and of course also all viewers are eagerly looking forward to watch is that of Babeetta and Iyer. With Babeetta in a dainty Bengali saree and Iyer in the traditional lungi, viewers will get to watch the duo’s sizzling dance performance. But unfortunately, Jethaalal misses it all!

Taarak Mehta Ka Ooltah Chashmah Jethalal comes up with an concluding act. It becomes a big surprise. Only Jethaalal’s performance remains to be seen and with a superlative performance, his act surprises everyone in the Society. Covered completely from head to toe in a PPE kit, Jethaalal steps out to have an open-heart conversation with Ganapati Bappa himself.

Jethaalal narrates to Lord Ganesh the present situation of the Society, of the world and of people everywhere. He tells him about the conditions that the pandemic has brought upon his world and asks the Vighnaharta to relieve it of the pain and suffering. But the performance has an extension to it and what that is, viewers will find out only when they watch the episode.

Why doesn’t Jethaalal get to watch Babeetta and Iyer’s performance? Of course, there has to be a very good reason for it. And that reason will only be revealed in the tonight’s episode which will make viewers laugh and get entertained like the show always does.