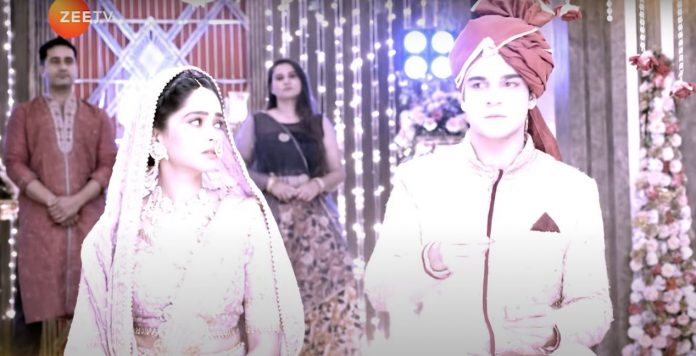 Kumkum Bhagya 15th Sept Double trouble for Ranbir Ranbir and Prachi try to trick Maya’s mother Anuradha. Ranbir tries hard to send Anuradha outside. He lies to her that Maya had taken oaths, that she will not show her face to anyone and she will not talk to anyone, else the marriage will break. Anuradha asks Maya why is she swearing for such a thing. Ranbir tells that she can’t see Maya’s face now. Anuradha scolds Maya. Prachi hides from Anuradha. Dushyant asks Anuradha to get Maya.

Anuradha asks Ranbir to come with her. Dushyant points gun at Ranbir. He scolds Ranbir for making Maya refuse for the marriage. Ranbir gets scared. Anuradha asks Ranbir to go and wait for Maya in the mandap. She tries to calm down Dushyant’s anger. Prachi asks Ranbir what will they do now. Ranbir asks her to marry him. He tells that there is no other way.

Anuradha asks Dushyant not to threaten Ranbir. Dushyant tells that Ranbir didn’t marry Maya yet. He threatens Ranbir that he will kill Ranbir’s family. Prachi doesn’t think they should marry in this way. Prachi agrees to marry him. Ranbir thanks Prachi. He cheats Dushyant. He tells that he will come downstairs after finishing his work. He takes Aryan’s help and asks him to take care of Maya. He goes to the mandap where Prachi is waiting for him. After the flashback ends, Ranbir thinks how would he explain Prachi about his move.

Kohli family gets scared on seeing a gun with Chobey. Chobey asks Vikram to take the gun as a gift from him. Vikram tells that he doesn’t know to use a gun, he doesn’t want the gift. Ranbir wants Vikram to take it, so that they get saved. Prachi failed to tell the plans to Sarita and Shahana. She thinks they would be much worried for her. Sarita and Shahana look for Prachi. They find Rahul unconscious. Shanana thinks Dushyant has caught Prachi and Aryan. Sarita fears that Prachi and Aryan are kidnapped. She asks Shahana to delay the marriage.

Meanwhile, Pragya looks for Prachi. She asks the neighbor about her. She wonders where did Prachi go. The neighbor tells her about the dancers coming to her home. Aaliya hires some goons. She promises Rhea to get Ranbir and Rhea married. She tells that she has got the idea from the dancer, who had put a veil on her face. She tells her idea of bride changing. Rhea asks where will Maya go. Aaliya tells that they will kidnap the bride.

She has already called the kidnapper. She doesn’t know that the kidnapper works for Dushyant and is coming for Maya’s wedding. She tells that she has arranged a wedding dress for her. Rhea asks Aaliya if she is saying the truth. She happily hugs Aaliya. They come across Shahana. She doesn’t doubt Shahana. Shahana gets to see Dushyant and Chobey keeping Ranbir at gun point. She feels Ranbir can’t leave the mandap. Prachi wants to tell Shahana about her plan. Shahana takes help from Pallavi. Vikram gets upset seeing Pallavi with the Sardar.

He asks Dida to help him. He complains about Pallavi’s affair with the Sardar. Pallavi asks him to stop the nonsense. She tells that Shahana is the Sardar. Rhea doesn’t know what to answer everyone when the marriage truth comes out. Aaliya doesn’t want her to worry about the future. Rhea praises her for always solving her problems. Aaliya asks her to get ready in Maya’s costume. She is sure that nobody will identify Rhea once Maya gets kidnapped from the mandap. Aaliya doesn’t know that Ranbir has already changed the bride, Prachi is sitting in the mandap with Ranbir. What will happen when the brides get swapped once again? Keep reading.

Reviewed Rating for this particular episode Kumkum Bhagya 15th Sept Double trouble for Ranbir: 2/5
This rating is solely based on the opinion of the writer. You may post your take on the show in the comment section below.