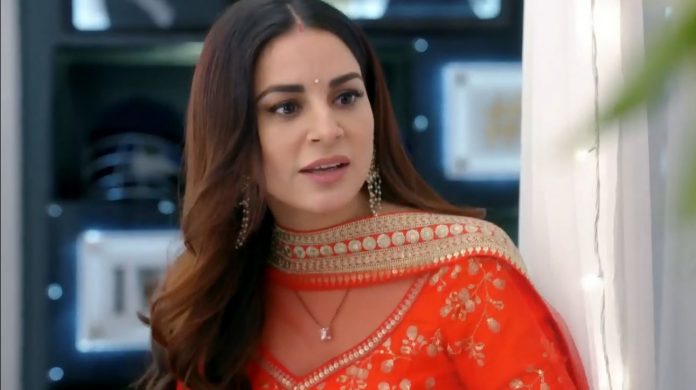 Kundali Bhagya Unexpected Karan Preeta charming act 15th September 2020 Preeta tries to charm Karan. She tells him that he is really like a God for her, since he is her husband. She apologizes for her mistakes. Karan asks her not to call him with silly names. Preeta agrees to not hurt him by calling him anything silly. He asks her to admit that he is the best. Preeta tells that she can’t tell that, since he is superior to the best. He gets glad. She asks him to forget everything and hug her.

They have a romantic hug. Karan and Preeta recall their old romantic moments. They get happy with each other. Sameer finds Sherlyn and Mahira spying on Karan. He scolds them for peeking in. He threatens to call Rishabh. Sherlyn takes Mahira with her. Mahira is enraged. Sameer wants to tell Shrishti about Mahira’s madness. Mahira asks how could Sameer insult her. Sherlyn tells that anyone would have reacted the same way.

Mahira doesn’t want Sherlyn to defend Sameer. Sherlyn tells that even if Karan forgives Preeta, she will show her rude behavior and truth to Karan. She is sure that Karan will not run after Preeta. Meanwhile, Karan asks Preeta if she has told everything by her heart. Preeta confuses him. She tells him that she has told everything by her heart. He asks her not to tease him again, else he will tease her.

He asks her if she thinks he is the best. Karan romances her and tells that she is his wife Preeta Luthra now. He teases her and wants his rights on her. Their romance turns out to be Mahira’s imagination. She is much worried. Preeta realizes that Sherlyn and Mahira left. She gets away from Karan. Karan thinks what is Preeta thinking that she came close to him and then went away. He wants to show that he rules in his room.

He occupies the bed. He asks Preeta to get a glass of water for him. She doesn’t take his order. He tells her that she was just pleasing him with her talks, that she is his servant and he is the King. She tells that he isn’t any King. They have a cute fight for the bed and their rights on the room. She tells him that she has equal rights on the room. She refuses to leave the room when he commands her.

He doesn’t want to share the bed with her. She tells him that she will not command him, he can better sleep on the couch. He praises himself for coming up with a better idea. They both fight for the same pillow. Karan leaves the room. He realizes that Preeta had ousted him from the room, he is really a cat and she is the lioness. He satisfies his male ego by telling that he left the room on his own, she can’t throw him out.

He tries to keep his mind engaged. On the other side, Sameer calls Shrishti and informs her that he has handled Sherlyn and Mahira well. She feels proud of him. He reminds her that she promised to kiss him. She gets shy and ignores the talk. He pulls her leg and enjoys it. Preeta goes to help Karan. He argues with her. She tells him that she will not get him inside the room even if he gets bitten by the mosquitoes. She asks him to stay outside. She feels bad for Karan, who feels cold outside. She wants him to apologize and come back. He refuses to apologize. She warns him of the bad weather. He doesn’t listen to her at all.

Reviewed Rating for this particular episode Kundali Bhagya Unexpected Karan Preeta charming act: 3/5
This rating is solely based on the opinion of the writer. You may post your take on the show in the comment section below.