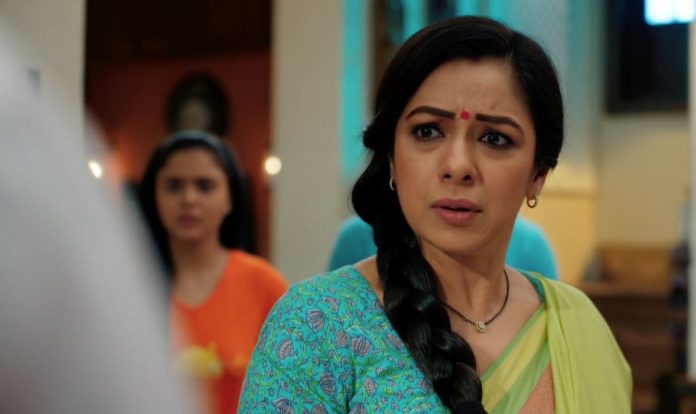 Anupama 17th September Shocking reaction on Kavya’s entry Anupama returns the jewellery to Baa, who takes all the things in notice. Anupama clarifies about the missing jewellery, which is given to Dolly on a festive. Baa asks her to wear some jewellery so that people know that Vanraj is earning well. She doesn’t want Anupama to bring any insult for Vanraj. She gets angry on Anupama, who asks her to keep the diamond ring bought for Kinjal.

Baa tells her that she doesn’t want any favor on herself. She asks Anupama to keep the ring and the remaining cash which she got by selling her jewellery. She gets too rude towards Anupama and shows her dominating side. Anupama tries hard to clarify, but ends up upsetting Baa. Bapu ji realizes that Leela/Baa is being much harsh on Anupama. He finds Baa insulting Anupama. He teaches a lesson to Leela by reminding her that she has also sold the jewellery given by his mum to get some good jewellery for herself.

Meanwhile, Nandini enquires about Anupama. Samar feels sorry for his mum. He tells her that he also believes that marriage is useless, since he always see his mum in trouble. He doesn’t have any liking towards the marriage concept, just like Nandini, who has seen her parents getting separated. Nandini finds him upset and cheers him up. He tells her that Anupama handles everything well and still keeps smiling.

Furthermore, Kavya fights with Vanraj for his behavior. He explains her that he is just faking love for Anupama. He expects her to understand him well. She expects him not to act helpless and fool her. He thinks she is getting too insecure. He wants her to understand him. He tells her that he can’t explain her further. Anirudh tells Kavya that she is still a doormat for Vanraj. He laughs on her relationship. He tells that she left him, but couldn’t get Vanraj. She angrily makes a decision.

On the other side, Vanraj is upset with Anupama. He gets some ear pain and doesn’t take her help. Anupama takes care of her and apologizes to him for her impulsive decision. She exclaims that she has taken the decision just for Paritosh’s happiness, she didn’t feel pressurized by Rakhi, who could have eventually dropped the diamond ring demand. She tells him that her children’s happiness matters to her. Vanraj understands her step taken for Paritosh.

He still explains her that like he earns money for the family, its her duty to maintain peace in the family. She tells him that she has unintentionally upset Baa and him. She feels sorry and promises to fix up everything in the engagement function. He gets some relief on hearing her and goes to sleep. Anupama confesses her love for her. She feels lucky to get a nice man like him. She is gad that he always forgives her. She wants their relation to always stay the same. She feels the happiness will soon come home.

Later at night, Kavya comes home in a shocking state, like she has been abused by Anirudh. She has wounds on her body and is terrified. Vanraj and his family are shocked to attend Kavya. She cries aloud and hugs Vanraj. She tells him about Anirudh, who tortured her and compelled her to leave the house. She tells Vanraj that she will live with him in his house. Vanraj goes horrid seeing his family’s reaction on Kavya and his hug. He doesn’t want any troubles in his family. He asks Anupama to pacify Kavya.

Anupama is moved seeing them together. She tries to console Kavya, who starts an emotional drama to fool Anupama. Kavya takes advantage of Anupama’s goodness and reminds the promise. Anupama tells her that she can always come to stay, being like family. She asks Kavya about her condition. Kavya lies to them about Anirudh’s abusive behavior, due to which she left his house. She tells that she will stay with Nandini from now. Anupama doesn’t let her go to Nandini to protect her from Anirudh. She opens the doors of her heart and house for Kavya. She wants Kavya to stay with them.

Baa is against her decision, while Vanraj is helpless to agree. He really believes Kavya has been abused. He also wants to protect her. Kavya makes a place in his house. She is sure that she will win Vanraj completely by ousting Anupama from the family. Kavya romances Vanraj in Anupama’s absence, while Baa asks Anupama not to leave her husband alone with any outsider. Baa tries to give sense to Anupama. Will Anupama learn Vanraj and Kavya’s affair? Keep reading.

Reviewed Rating for this particular episode Anupama 17th September Shocking reaction on Kavya’s entry: 5/5
This rating is solely based on the opinion of the writer. You may post your take on the show in the comment section below.