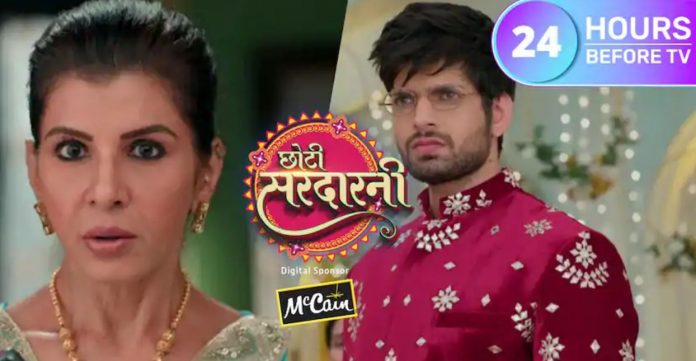 Choti Sardarni 17th September Truth out Vikram is Manav Vikram scolds his team for missing out important details. He feels bad that Sarabjeet, Meher and Kulwant created a scene and insulting his intelligence during his engagement ceremony when they broke out the case solving details. He wants to find out Manav so that he solves his case. He announces a huge amount as a reward for someone who finds Manav. He wants to do his duty.

He wants to put Kulwant behind bars for the crime. He informs his mom that he is doing his duty, which is more important that his marriage functions. He gets angry when someone jokes that he is putting his own posters. Vikram’s dad Surya is worried that he may know his real identity of Manav if he stays in the city for long time.

Surya wants Vikram and Aditi’s marriage to get done soon. The family plans Aditi’s haldi ceremony. Amrita teases Meher and tells her that she should confess love to Sarabjeet. Sarabjeet is worried that Meher has to attend the case hearing in Serbian court. Meher learns that her mistake can cost her a long punishment term. Sarabjeet wants to stop Meher from the arrest. The lawyer tells Sarabjeet that Meher will be arrested in three days, the Serbian court will pass the orders.

Sarabjeet wants to protect her. Meher gets emotional and thinks she will be missing her family, her children, Sarabjeet when she goes away. She has overhears his conversation. She wants to behave normal and keep him away from sorrow. Sarabjeet also lies to her to lessen the tension. He tells her that everything is fine, they will have a trip to Serbia and come. He asks her to sign the summon file so that he can take to the lawyers.

He doesn’t tell her that she may get arrested. Kulwant thinks Vikram isn’t Manav, so he is marrying Aditi. She gets a shocking call from Vikram. Vikram plays the trump card and poses as Manav to trap her. He asks her to come to the CBI office. She refuses to come since she is busy in the function. He sends her Manav’s video to make her tensed so that she commits some mistake. He summons her to record her statement. He tells her that he has found Manav, he wants her statement soon so that he can solve the case.

Vikram recorded the video to fool Kulwant. She gets fooled and thinks Manav is really alive. She hides the video from Manav. Meher doesn’t want Kulwant to check the court summon. Sarabjeet tells the attorney that he will bring Meher to Serbia for the case. He books the tickets to Serbia. He wants their life to get happiness. Meher promises him that she will always be with him to fight any battle. She wipes his tears and cheers him up.

She tells him her little dreams which she wants to complete. Kulwant and her sons meet Vikram at the CBI office. Vikram questions them. Kulwant asks Vikram to keep Manav away from them. He tells them that Manav has accused them. Kulwant gets worried. She tells that she didn’t had any personal enmity with Manav. Sarabjeet tells Meher that he can’t manage anything without her, he got habitual to her. He doesn’t want to live without her.

Meher tells him that they will be together, holding hands. She tells that she will die, but not break her promise. He gets emotional. Meher and Sarabjeet celebrate their togetherness by applying haldi to each other in Aditi’s haldi function. Kulwant stops Aditi from seeing Vikram. She gets shocked to see a big scar on Vikram’s back, which proves that he is Manav. She gets certain that he is Manav, who has come back for revenge.

Reviewed Rating for this particular episode Choti Sardarni 17th September Truth out Vikram is Manav: 5/5
This rating is solely based on the opinion of the writer. You may post your take on the show in the comment section below.