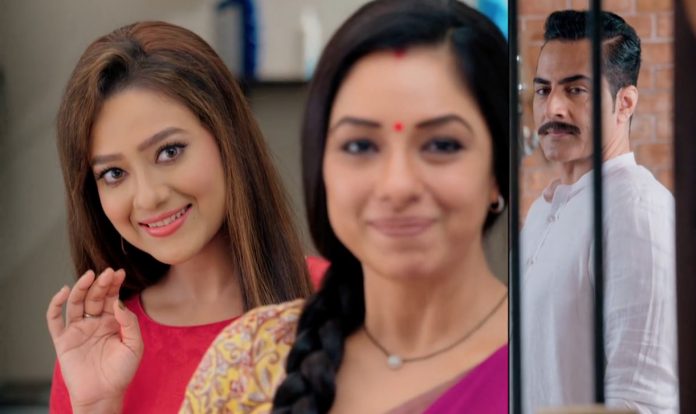 Kavya tells that she didn’t know Anupama’s naughty side. Dolly tells that Anupama doesn’t always cry, she has a fun side as well. Kavya’s choice is classy and gets praised by Pakhi. Pakhi thinks Kavya is an ideal woman. She respects Kavya a lot. Anupama tells that Kavya has a good choice, but she will decide everything for Paritosh’s engagement. She shares her dreams for her son’s engagement.

She tells that she has already planned everything, she will make everything perfect for him. Pakhi doesn’t want so much melodrama all the time. Anupama pats her with love. Dolly asks Anupama to show the saree which she had kept since a long time. Anupama shows the beautiful saree. Dolly tells Kavya that Vanraj had got the saree years back. Anupama feels shy and tells them that Vanraj and she has love between them. Dolly teases her.

Anupama feels bad, but doesn’t think Kavya did it deliberately. Anupama takes the Kurta for Vanraj to ask his choice. Kavya makes romantic gestures and makes him feel awkward. He wants to ignore Kavya when Anupama is in front of him. She tells that Vanraj doesn’t wear loud colours. Anupama tells that she knows him better. He goes with Kavya’s choice. He asks Anupama to give the blue kurta to Samar and get some light colour for him. He adds that he doesn’t want to look odd in loud colours. Anupama feels strange that Kavya is interfering in every matter when she has already explained her that she will decide everything for the family.

Jhilmil gets her daughter home. She asks her daughter to be with Pakhi. Samar sees Nandini with love. Paritosh and Pakhi see Samar and realize his feelings. They tease Samar. Jhilmil gets insulted by Kamini. Anupama feels upset on hearing this. She tells that Jhilmil is like family. Kamini tells that Jhilmil is poor, she may steal the jewellery. Anupama takes a stand for Jhilmil. She asks Jhilmil not to cry. Jhilmil tells that she isn’t a thief. Anupama tells that she trusts her a lot. She asks Jhilmil to forget Kamini’s taunts. She corrects Kamini’s bad behavior.

She tells that they have to make continental food for Rakhi. Kavya tells Anupama that she can help her in making diet food for Rakhi. Anupama agrees to take her help. Anupama and Kavya are happy to see Vanraj. The engagement ring gets stolen. This creates a big moment of tension in the family. Rakhi tells Anupama that the ring is missing. Anupama is hugely shocked since she had kept the ring with her. She gets answerable to the family. Who has stolen the ring? Keep reading.

Reviewed Rating for this particular episode Anupama 23rd September Written Update New shockers: 3/5
This rating is solely based on the opinion of the writer. You may post your take on the show in the comment section below.