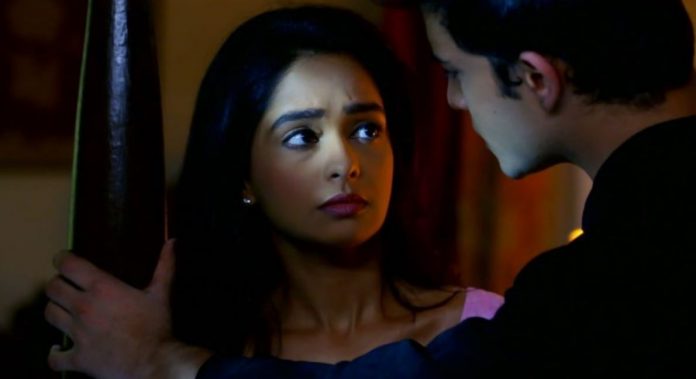 Kumkum Bhagya 24th September 2020 Written Update Abhi gets the good news from Vikram that Ranbir and Maya’s marriage didn’t take place. He shares his happiness with Rhea, who runs to meet Ranbir. Rhea is glad that Ranbir is single. She wants to marry him. She hears the Kohli family praising Prachi. They think Prachi is an angel, since she didn’t think before risking her life for Ranbir’s sake. Rhea gets angry that Prachi has won their hearts. Pallavi tells that she is happy that her son’s marriage didn’t happen.

Maya’s chapter ends forever. Pallavi gets peace. Ranbir wants to meet Prachi. They are happy that everyone got fine. Dida wishes that a girl like Prachi enters Ranbir’s life. Vikram tells him that he would like Prachi to marry Ranbir. Dida likes his thought. Rhea angrily goes away. Dida tells that she wants Prachi to come into their family. Vikram tells that Ranbir and Prachi should love each other so that they get married.

On the other hand, Pragya is much upset that Sarita and Shahana didn’t think of Prachi’s safety and risked her life. She scolds Prachi for sitting in the mandap. She asks why didn’t she tell her plan. She can’t see her daughter hurt. She tells that Prachi would have got arrested or shot by Dushyant. Sarita tells her that its Prachi and Ranbir’s love, they can do anything for each other, they can risk their lives too. Pragya too realizes this.

Meanwhile, Rhea is frustrated that Prachi has won Ranbir again. She didn’t get any love and appreciation in her life, since Prachi came into their lives. She wants Ranbir at any cost. She overhears Ranbir and Aryan’s conversation. Ranbir wants to propose Prachi. Aryan tells that he should propose Prachi and get her reply. Ranbir thinks he will take the advantage of the Rose day. He wants to give her a red rose and see her feelings in her eyes.

Aryan congratulates Ranbir. Ranbir tells that Prachi will be happy with him. They have drinks and enjoy. Rhea sheds tears. Later at night, Ranbir comes to Prachi’s house to meet her. He tells her that she shouldn’t scream knowing its just him who always makes such an entry. He feels free of Maya’s mess. He is thankful to Prachi for always helping her. He asks Prachi to look into his eyes and know his plans for the Rose day. He expresses his feelings for her.

Sarita tells Pragya that Prachi loves Ranbir, that’s why she has shown such courage. Pragya doesn’t know if Prachi will get her love. She tells that love faces troubles when it changes into a bond of marriage. She tells that the families will have to unite before Prachi and Ranbir’s union. She doesn’t think Kohli family is bad. She just wants them to not belittle Prachi because of the middle class background.

She doesn’t know if Ranbir’s family will agree for the alliance. Sarita asks her to meet Kohli family and talk about the alliance. She wants Pragya to end the problems. Rhea gets drunk. She tells that Ranbir doesn’t love her. Aaliya finds her shattered. She doesn’t want Rhea to lose her senses. Rhea feels dejected that she will be left alone.

Reviewed Rating for this particular episode Kumkum Bhagya 24th September 2020 Written Update: 4/5
This rating is solely based on the opinion of the writer. You may post your take on the show in the comment section below.