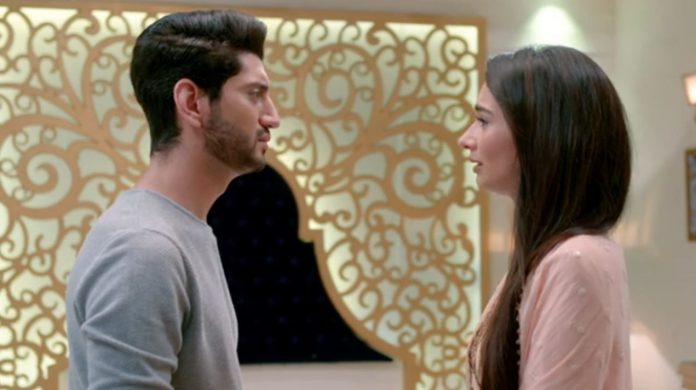 Pavitra Bhagya 23rd September 2020 Review Update Reyansh finds Praniti hurt. He cares for her wound and nurses her. He asks her to trust him. He realizes he is the reason for her wound. He closes eyes to not see her back. Praniti lets him nurse the wound. Reyansh and Praniti get into an affectionate moment. Reyansh does the aid to her wound, telling her that he will always support her completely. They both tend to be falling into love.

Praniti wants him to open his eyes once done with the task. She thanks him for making her see the old Reyansh in him. He is grateful for her trust. She asks him to answer her if his surname is important for him more than her life. Reyansh apologizes to her. He tells her that he has chosen her side. Baljeet tries to bail out Vardhan. She fails to get the favor from the people who she always helped. She realizes that none can help Vardhan.

She finds an ally, who is ready to help her and bring Vardhan back. Mallika tells her that Praniti doesn’t know the meaning of a family. She acts sorrowful over Vardhan’s defamation. She shows the news and upsets Baljeet further. Reyansh tells Praniti that he never felt sorry, he never learnt to say sorry, there was no one to teach him right things and show the right path. He feels unfortunate that he never learnt the difference between right and wrong.

Praniti gets impressed hearing his speech. She feels like he is the Reyansh with whom she fell in love. She feels love for him. She tells that he looks real today. She knows he has suffered a lot in his life, which made him change into a bad person. She is happy that he has found himself by removing the arrogant mask. Reyansh is happy to see her understanding him so well. Baljeet knows Mallika loves Reyansh.

She gets scared thinking Reyansh is falling in love with Praniti. She doesn’t want it to happen. Praniti tells Reyansh that she would have never loved him if he was a wrong person. She wants to forget the past. Reyansh and Praniti cry and share their feelings. He feels embarrassed on seeing her faith on him. She tells him that he isn’t a bad guy, but pretends to be bad. She finds him a gem at heart. Reyansh gets touched hearing her words.

She asks him to bring the real Reyansh out in front of the world. They have a moment of love. Baljeet doesn’t want Praniti to become a part of Reyansh’s life. Praniti hopes that Reyansh doesn’t change ever. Jugnu wakes up and asks him about the issues at home. Reyansh tells that it was her dream. He pacifies her. He wants to give a good life to his daughter.

Furthermore, Mallika asks Baljeet to just get him married to Reyansh. She tells that she can use her contacts and get Vardhan out. She ensures that she will throw out Praniti from the house. Reyansh feels happy within on recalling Praniti’s words. He recalls his lovely memories with Praniti. He thinks he has come close to Praniti and Jugnu, while he intended to separate them. He is changing his thinking towards them. He is afraid to lose his family. Baljeet tells Mallika that she can agree to the deal. She joins hands with her to get Praniti out of Reyansh’s life. What will happen next? Keep reading.

Reviewed Rating for this particular episode Pavitra Bhagya 23rd September 2020 Review Update: 5/5
This rating is solely based on the opinion of the writer. You may post your take on the show in the comment section below.