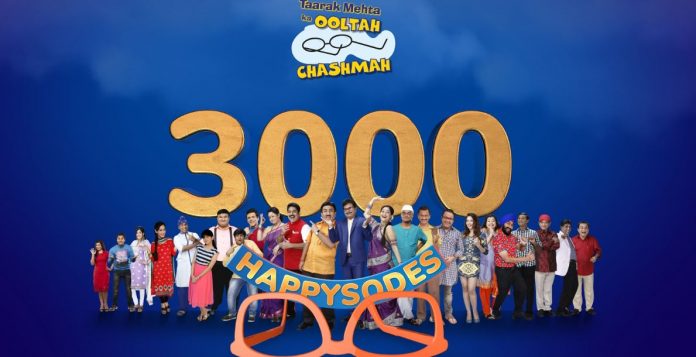 Mumbai, Sept 22: Neela Film Productions Private Limited’s iconic daily comedy show – Taarak Mehta ka Ooltah Chashmah (TMKOC) will be soon completing a whopping 3000 episodes! India’s much loved television serial recently entered the 13th year of its almost uninterrupted 12 year run. With 3000 episodes, it now will cross another major milestone on 24th September 2020. TMKOC is India’s only family show that cuts across demographics to entertain audiences with humor. The show’s success is also attributed to its close connection with the Indian society which it represents through its story line and its characters. No wonder, the show’s Gokuldhaam Society which has become a landmark by itself, is often referred to as ‘Mini India’. With 3000 Happysodes, Taarak Mehta Ka Ooltah Chashmah Crosses Another Major Milestone On 24th This Month

Taarak Mehta Ka Ooltah Chashmah aired for the first time on 28 July, 2008 and was telecast on SAB TV, Sony Pictures Network India. “To Taarak Mehta Ka Ooltah Chashmah’s audiences, fans and its supporters, I thank you with all my heart. Every milestone that the show achieves is a matter of pride not just for us but for the entire nation which brings us great joy. We will be completing 3000 happysodes on 24th September 2020 and this brings with it a feeling that I cannot effectively express in words. For the first time in twelve years, the airing of the show was interrupted for a couple of months due to the unfortunate lockdown. Through this time too, our viewers and well-wishers stood by us and supported us. Now that we are back on, our commitment to keep creating great content ingrained in social values, and spreading happiness and positivity through the show remains right at the top,” says Mr. Asit Kumarr Modi, Creator of the show.

A well-rounded show, Taarak Mehta Ka Ooltah Chashmah effectively captures all emotions and embodies the social fabric of our country. It is a proponent of India’s rich and varied culture and of its unity in diversity. Through intelligent and relevant content, the show makes ingenious efforts to instill positivity and promote happiness in everyone’s lives.

“3000 episodes is a significant milestone but at the end of the day, it still is just a number. We aspire to carry on entertaining and spreading social awareness amongst our viewers with the same dedication and passion like we have for the last 12 years. Taarak Mehta Ka Ooltah Chashmah is the world’s longest running daily family comedy show because of the entire team’s efforts and commitment. I also thank each and everyone associated with the show who has contributed to its huge success,” concludes Mr. Modi.