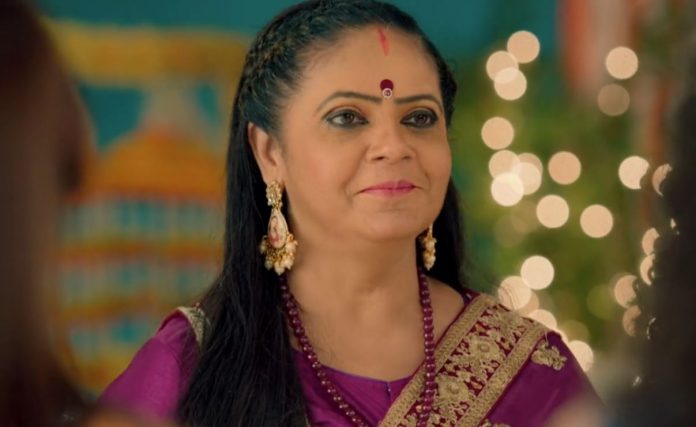 Yeh Rishte 25th September Kuhu threatens Meenakshi Mishti cries and gets consoled by Parul. Parul tells her that Kuhu behaves random, she can do anything, they should better donate the things. The story takes a leap of five months. Kuhu is still pregnant. The flashback shows that Meenakshi has stopped Kuhu from taking the pills. Kuhu threatens her to abort the child. She tells that she will break the promise, she will not give her the heir. Meenakshi manipulates her.

She tells her that Maheshwaris love Mishti, but Kuhu is the family member. She tells that she has got a chance to prove that she is better and ahead of Mishti. She tells that if she gives birth to the baby, then Mishti’s place will be worse than Parul. She tells Kuhu that Mishti will always be indebted to her. Kuhu understands this and agrees to deliver the baby. After five months leap, Mishti is seen taking care of Kuhu.

Kuhu taunts Mishti for not experiencing pregnancy. She rejects Mishti’s choice of clothes. Parul asks them to donate the clothes. Abir tells that he will make Kuhu’s favorite food, instead hiring a cook for her. He doesn’t want Kuhu to insult Mishti all the time. Kunal asks Kuhu not to taunt Mishti that she couldn’t become a mother. He tells that its wrong. Kuhu thinks she has sidelined Mishti, as she had cursed Mishti during a fight, Mishti is nowhere important now.

Mishti hears Kuhu’s bitter statements and cries. Abir takes breakfast for Kuhu. He tells that Mishti is taking good care of her. He wants Kuhu to be happy. He thanks Kuhu for all the help. Kuhu tells that she can do anything for him. Rajshri prays for Mishti and Kuhu. She waits for the family members to wish her birthday. She finds Varsha upset with her. Varsha doesn’t wish her. She thinks of the rift created between them. Vishwamber tells Rajshri that Mishti is coming to surprise her. He asks her to be happy. Jasmeet and Varsha wish Rajshri.

They have a happy moment. Kuhu tells Meenakshi that she is fulfilling her promise. She threatens Meenakshi. She tells that she won’t give the baby to them if she doesn’t get the property. She tells the baby that she will take him away from the family if Mishti fails to look after the baby well. Mishti gets worried on hearing this. She doesn’t want Kuhu to separate her from the baby.

Reviewed Rating for this particular episode Yeh Rishte 25th September Kuhu threatens Meenakshi: 3/5
This rating is solely based on the opinion of the writer. You may post your take on the show in the comment section below.