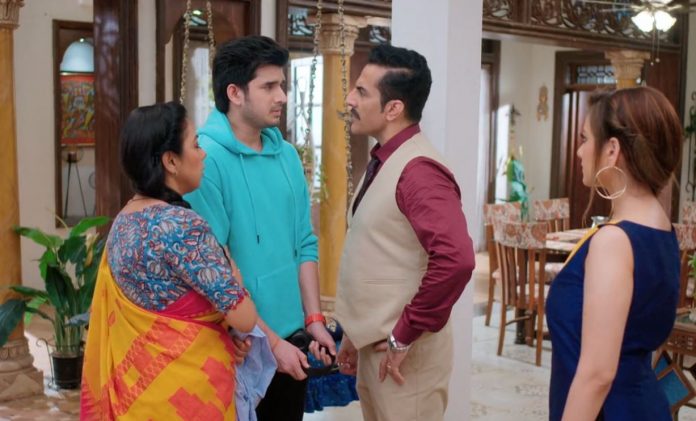 Anupama 26th September Written Update Huge drama The family is happy that they got the ring back. Anupama lectures Kamini on her cheat. Kamini apologizes to her. Anupama can’t forgive her until she apologizes to Jhilmil and Gudiya. Kamini gets helpless and apologizes to Jhilmil. Jhilmil gets glad that Anupama has found the real thief and cleared her name. Baa wants to see the ring from Samar. Anupama gets the ring and asks Baa to have a look.

Samar gets surprised to see the ring. Baa tells that she will keep the ring safe. The family is relieved. Samar finds Anupama a smart person. He informs Nandini that Anupama has found the ring by a superb plan. Nandini gives a treat to Samar. He tells her that she should learn cooking. He jokes on Nandini’s healthy looks.

He tells her that he can make something for her. He has always seen Anupama cooking and picked up some good skills. He tells Nandini that he used to attend his mother’s cooking classes. She likes him to spice up her meals. He tells her that he will come anytime she calls him. He expresses his feelings and then calls it a joke. He falls for her. Vanraj gets distracted by Kavya. He tells her about an important meeting.

She wants him to come along to her room so that they get some private time. Anupama suggests them to have the meeting in the living room, since Baa won’t like them to go to the room. Vanraj understands Anupama’s point. Anupama tries to explain Kavya that Baa will be angry to see them together in the room. She doesn’t want to set a wrong example for the children. Kavya tells that she didn’t feel bad.

Moreover, Anupama feels strange to explain Kavya. She knows Baa is also right, Vanraj and Kavya’s friendship doesn’t look good all the time. Samar comes home happily and asks Anupama for the bike keys. He doesn’t know about Vanraj’s meeting. Kavya yells at Samar to stop him. Samar tells that he didn’t see his dad working in the living room. He apologizes to Kavya. Anupama wants the matter to end. Kavya doesn’t end the matter. She lectures Samar. Vanraj stays cool until the meeting gets over.

Once he gets done with his work, he comes to his raging avatar to shout on Samar. He is ashamed of Samar. He asks Samar to stop dancing all the time. He tells that Samar will never change. He feels Samar will get insulted by the world when he fails to earn anything. Samar wants to make dance his profession.

Vanraj asks him to stop ruining his life. Samar asks him to let him dream. Kavya interferes between them, which looks bad to Anupama. Anupama stops Kavya from speaking in between. She tells that Vanraj and Samar have rights on each other. She didn’t speak between them, even when she has a right, but she chose to stay silent. She tells that Kavya has no rights to talk between them. She asks Kavya to just stay out of their matter. Vanraj feels Anupama is right. Vanraj tells that none has a right to speak between a father and a son. He calls Kavya an outsider, which upsets her.

Vanraj angrily doesn’t think of her emotions. Samar apologizes to disappoint Vanraj always. He doesn’t want to leave his dance profession. After Vanraj and Samar leave, Anupama exclaims that none speaks when an argument happens between two people. She tells that the two people have a right to argue and fight, so that they clear their differences. She asks Kavya not to speak between relations. She has taught the same to her children. Kavya gets much angry that Anupama lectured her for no reason.

Anupama apologizes to calm her down. Anupama tells that Vanraj’s anger will melt down soon. She shows her strong bond with Vanraj. Kavya feels terrible and controls herself.

Later, Kavya goes to help Anupama in work. She tries to get Anupama’s place by doing her duty. Anupama is excited for Paritosh’s engagement. She tells Kavya that she will plan an amazing gift for her son. She calls Vanraj and herself a single entity. Kavya grows jealous and feels Anupama is much connected to Vanraj. Anupama gets her old saree. She recalls Vanraj had gifted it to her during her first pregnancy. She decides to make Paritosh’s sherwani with the same saree.

Paritosh doesn’t know if it will look good. He is worried for Rakhi’s taunts. Anupama finds him appearing unhappy again. She knows that he doesn’t want any old clothes, but designer clothes. She promises to make the sherwani trendy and auspicious. She tells that the sherwani will have his parents’ blessings. She asks him to wear designer clothes before the rituals. Kavya steals Anupama’s nuptial chain. She tries it madly. Vanraj warns her to stop the nonsense. He doesn’t want Kavya to reveal their affair to anyone in the house. Kavya gets disheartened when he shows her place. What will Kavya do in rage? Keep reading.

Reviewed Rating for this particular episode Anupama 26th September Written Update Huge drama: 5/5
This rating is solely based on the opinion of the writer. You may post your take on the show in the comment section below.