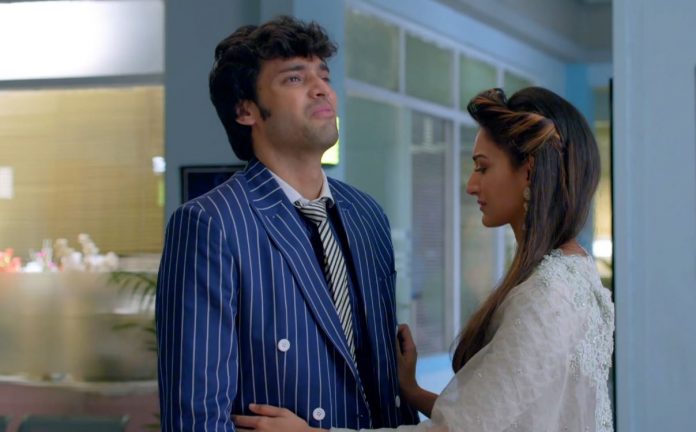 Kasautii Zindagii Kay Final twists 28th Sept Review Update Anurag wasn’t aware of Sneha’s loss. He expresses his pain on knowing about Sneha’s death. He tells Prerna that he was hoping to meet Sneha some day, he had come to Shivani’s Sangeet just to see his daughter. He wishes he could see his daughter some day. He tells that he was mistaken that Sneha is happily living with her mother. He apologizes to Prerna for giving her unmeasurable pain.

He feels much guilty that he has been so wrong to hurt Prerna in this manner. He didn’t know that his actions will result in such dire outcomes. He feels sorry from his heart and goes on pleading to her for forgiveness. Prerna realizes that he is saying the truth, he didn’t mean to kill Sneha or harm her, he just wanted to get rid of her. She melts her heart seeing his tears. She seems to forget the huge loss and forgive him.

He thinks he has failed to keep his promise and protect Sneha. Prerna and Anurag have a hug to console each other’s sorrow. On the other side, Kuki plays a drama to slip into coma by taking the nurse on her side. She really wants to test Kaushik’s love, if its true or not. She thinks he will wait for her love if he really loves her. Kaushik informs Monu about Kuki’s coma state. He tells that he will wait for Kuki all his life if needed, but not love anyone else.

He is ready to sacrifice his love for her sake. He proves that his love for Kuki is true. Kuki feels sorry on knowing his real feelings. Anurag and Prerna are informed about Kuki’s conscious and stable state. They meet Kuki, while Kaushik rushes out to avoid facing them with the bad news. Kaushik learns that Kuki made the nurse lie to him with an intention to get rid of him. He feels worse that Kuki isn’t trusting his love. He makes a leave from there in a heartbroken state. Kuki enquires about him. She learns that he got to know her plan and left.

Kaushik feels sorry for himself. He wishes Kuki stays happy in her life. Prerna sends Kuki home. She goes to the orphanage to complete Samidha’s adoption process. Priyanka wants her to just sign the papers. Chandrika hinders them and reveals that Samidha already got adopted by a family. Prerna requests her to tell her about the family, so that she can meet them personally and explain her bonding with Samidha. She feels Samidha is just like Sneha for her.

Chandrika refuses to tell her anything. Prerna offers her money, but fails to know any details. Chandrika has already taken 4 crores from Komolika. Priyanka assists Prerna in knowing the name of the person who adopted Samidha. They both get moved to know that Komolika has adopted Samidha. Chandrika warns Priyanka from telling the truth and slaps her. Priyanka isn’t scared of evil Chandrika. She reveals the big truth to Prerna that Sneha is alive and she is Samidha herself. Prerna is overjoyed to know this good news.

Priyanka tells that Komolika has snatched Prerna’s daughter once again. Prerna determines to get back her daughter. Komolika informs Anurag about her decision to adopt Samidha. Anurag doesn’t object, since he also loves Samidha as his daughter. He then thinks of Prerna, who was keen to adopt Samidha. He thinks Prerna has a bigger right on Samidha, since she misses Sneha in her life.

Komolika shares the shocking news with Basus that Samidha is Anurag and Prerna’s daughter Sneha. While Mohini is on cloud nine on knowing this, Komolika wants her to keep the news a secret. Anurag happens to overhear them and learns the truth. He decides to unite Prerna and Samidha. Komolika feels helpless to kill Samidha in order to make her away from Prerna.

Reviewed Rating for this particular episode Kasautii Zindagii Kay Final twists 28th Sept Review Update: 5/5
This rating is solely based on the opinion of the writer. You may post your take on the show in the comment section below.