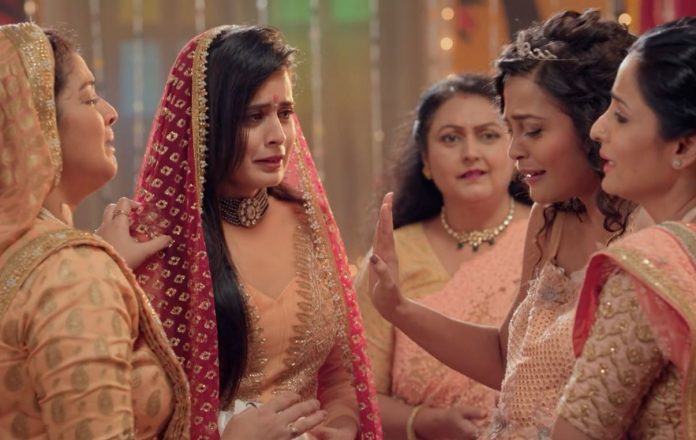 Yeh Rishtey Hai Pyaar Ke 29th Sept Kuhu creates a huge scene Kuhu bursts her anger over Mishti. She accuses Mishti for snatching all the attention. She feels Mishti can’t stay without spoiling her happiness. Kunal asks Kuhu why is she angry, if Mishti is having a function for herself. Kuhu tells that Mishti got all the guests with her in the function and left her alone. She thinks she is making a sacrifice once again because of Mishti.

She hurts Mishti’s sentiments. Abir and Mishti feel bad on hearing Kuhu’s bad comments. Abir defends Mishti. He clarifies that Mishti didn’t know his surprise, it was his idea to arrange the function for Mishti. Kuhu tells them that Mishti can’t be innocent all the time. She congratulates Mishti for snatching everyone from her. She feels Mishti will snatch her happiness and the baby as well. She tries to get all the attention for herself.

Meenakshi asks Kuhu to go to her room and take rest. Kuhu feels that nobody cares for her. She threatens Meenakshi that she will tell everyone that she is waiting for the legal heir. Jasmeet tells Kuhu that Meenakshi will always wait for her heir, its natural for her. Meenakshi warns Kuhu to be silent. Abir calms down Kuhu. He doesn’t want to tell Kuhu the truth, but he gets helpless. He tells Kuhu that she is carrying Mishti and his child in her womb.

He asks Kuhu can’t Mishti have a function for herself, since she is the baby’s real mother. Kuhu thanks Abir for telling her that she is just a surrogate. She cries that Abir has shown her real place. Kuhu gets hurting herself. Everyone gets worried for her. Kuhu asks Mishti to enjoy the party. Abir tells that he will call a doctor, but Kunal stops him. Kunal tells that Kuhu’s feelings got hurt because of Mishti. Kuhu’s BP gets high.

Kunal gets rude towards the family, especially Mishti. Doctor tells them that Kuhu’s BP is really high, the baby can get affected badly. She asks the family to take care of Kuhu and keep her happy. Meenakshi thanks the doctor. Rajshri asks Kuhu to be positive and get rid of the bad thoughts. Mishti is worried for Kuhu equally as others. Kunal tells Mishti that he won’t let such a thing happen again. Mishti tells him that she wants them to trust her.

Kunal doesn’t want to trust her. Abir tells him that Kuhu always exaggerates the matter. Kunal asks them to keep Kuhu happy as the doctor just said. He counts Kuhu’s sacrifice for them. He frees them from Kuhu’s responsibility. Abir doesn’t think things are going fine. He tells that Kunal and Kuhu forgot that he was against surrogacy. He wanted to adopt a baby. He didn’t request them for surrogacy. He tells that he already knew that surrogacy is tough. He thinks Kuhu has understood it now and Kunal is venting anger on them. Mishti calms down Abir. She tells Abir that she is happy, since he has given her the surprise. They spend some quality time.

Reviewed Rating for this particular episode Yeh Rishtey Hai Pyaar Ke 29th Sept Kuhu creates a huge scene: 5/5
This rating is solely based on the opinion of the writer. You may post your take on the show in the comment section below.