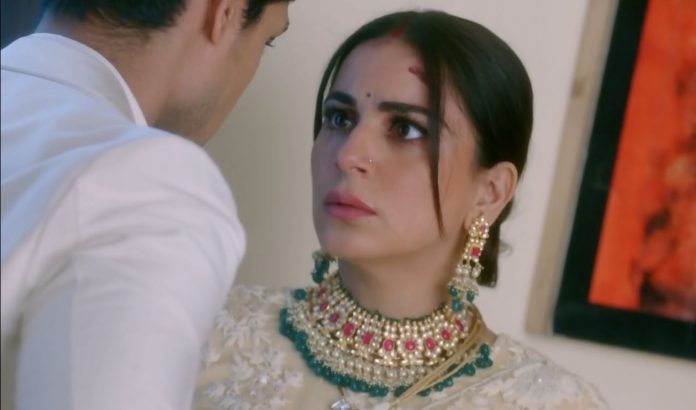 She realizes that Pawan has stolen something from the Luthra house. She wants to inform Preeta about Pawan. She doesn’t know that Preeta is kidnapped. She fails to connect to Preeta. She worries for Luthra family, who is now Preeta’s Sasural. She thinks to go in herself and find out. She gets scared seeing many goons. Pawan gets angry that Prithvi isn’t conscious yet. He makes a plan to leave Prithvi in Preeta’s room, so that Prithvi gets surprised seeing her. He loves Prithvi more than his own self.

He tells the goons that Prithvi also loves him a lot. He tells that they will faint seeing the brotherly love. Preeta gets conscious after Pawan leaves. She tries to find some way. She gets to meet Pawan. She asks him who is he and why did he kidnap her. He tells that she is safe in his house. She recalls Mahira’s words. She tells him that she has seen him kidnapping her. He tells that this house belongs to her, since she is of Prithvi. She calls him Raavan.

She asks him to let her go, she can pay him double. She isn’t in a state to run away. He tells her that she belongs to Prithvi. Preeta is shell shocked to know about Prithvi. She asks Pawan if he had kidnapped Prithvi. She asks him not to hurt Prithvi, he is not at fault. She tells that he should not harm anyone innocent. Pawan laughs seeing her concern for Prithvi. She scolds him for daring to touch him. She vents her anger at him. He doesn’t care seeing her daring side.

He tells her that he respects her, after seeing her respect Prithvi so much. He introduces herself as Pawan Malhotra. Pawan tells her that he is Pawan, Prithvi’s brother and a Raavan in her life. She is shocked to know it. Mahira tells Sanjana that she has become Mrs. Karan Luthra to meet the guests. She tells that she has got rid of Preeta. Sanjana tells that she understands her plans, but Karan won’t accept her.

Mahira asks Sanjana to go and ask Sherlyn. Janki encourages herself to enter the house. She calls Sarla to inform her whereabouts. She gets confused about the person to inform. Ramona apologizes to Sarla for her behavior. Rishabh is glad to see things getting fine between Ramona and Sarla. Ramona is helpless to say sorry because of Mahira. Rishabh asks Sarla why is she worried.

Sarla tells that Ramona apologized to her, which made her fall in a dilemma. Rishabh tells that he is glad to see Sarla getting respect. Sarla knows he is a good person. Shrishti also joins Sarla to praise Rishabh. They both know that Rishabh has always stood for Preeta as a friend, no matter what is family did with Preeta.

They are thankful to Rishabh for always being so humble. Rishabh tells them that Preeta is strong, she can fight for herself and make her place in the family. He asks Sarla to leave her worries, Preeta is sufficient for her battle. He likes the fact that Sarla has made both her daughters strong. Sanjana doesn’t like Rishabh bonding with Sarla. Pawan tells Preeta that he is really Prithvi’s brother. He shows their picture. Preeta tells Pawan that she isn’t his Bhabhi, she isn’t married to Prithvi, but Karan. He angrily shouts on her.

He wants her to stop taking Karan’s name. He vents anger on her. He threatens her by pointing the gun at her. He wants her to forget Karan. She tries to run away. The goons stop her. Pawan slaps his goons for troubling her. Preeta tells Pawan that Prithvi would not force her this way, he would never force her for marriage. Pawan tells her that Prithvi planned her kidnapping to marry her. She can’t believe Prithvi’s truth.

Reviewed Rating for this particular episode Kundali Bhagya Preeta learns Prithvi’s truth 1st Oct Update: 3/5
This rating is solely based on the opinion of the writer. You may post your take on the show in the comment section below.