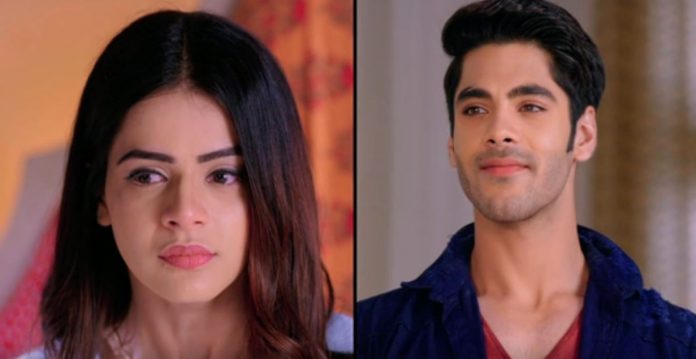 Shakti Colors Upcoming Star Plus Spoilers 1st October Heer comes to meet Virat while he is asleep in the hospital ward. She doesn’t wake him up. She wanted to see him once before Jharna and his marriage, knowing Jharna won’t even allow her to meet him casually. She thinks of Virat and her love story. She feels sorry that she couldn’t accept his marriage proposal. She doesn’t want to meet him ever. She wishes she could tell him the truth. She bids him the final goodbye. Preeto and Harak support Heer. They plan to tell her identity truth once her results come.

Preeto wants to tell Heer everything once she passes in the exam. She wants Heer to make her life and future. On the other hand, Parmeet forces Virat to marry Jharna. He doesn’t listen to his family, who passes the sindoor to him. Virat throws the sindoor and creates a huge scene. He gets helpless to point the gun at them and get away. Jharna is depressed seeing his rage. Heer thinks Virat would be coming to meet her. Her family checks her results and is excited to know if she has succeeded.

Yeh Jadu Hai Jinn Ka:
Rehan and Shayari find out Jhumru’s truth after Roshni’s doubt gets more certain. Aman gets a huge shock when he sees Jhumru as a jinn. Jhumru thanks them for making their work easy. He tells that just Roshni had a doubt on him. Rehan tells Shayari that she should have heard him before. She thinks to find out Jhumru’s background to find a way to fight him. Rehan asks her to believe his instinct next time. Shayari is fed up hearing his taunts.

They feel someone’s presence at the cave. Jhumru praises Roshni for finding his truth. He tells that she got late in finding out, since his motives are fulfilled. Jhumru reveals his real identity. He belongs to Lal Jinn clan. He wants to take Kaala Jinn’s place. He tries to stop Armaan from getting crowned as the next Kaala Jinn. He wants his rights on the throne to get powers. He is ready to kill Armaan. Roshni asks him to face her powers first.

Jhumru attacks Roshni. Aman can’t believe Jhumru’s powers. He tells that they have given Armaan’s life in his hands and he would control them. He is sure that Rehan and Shayari won’t get saved this time. Rehan and Shayari get attacked in the cave. Roshni and Aman worry for Rehan and Shayari’s lives. Roshni finds Aman attacked by Jhumru. He realizes that Jhumru has tricked her mind. She wants to rush to Armaan and secure him.

Yeh Hai Chahatein:
Rudra stops Balraj from ousting Prisha and Saransh from the house. They get into a bitter argument when Rudra almost hits his dad. Prisha is worried seeing their quarrel. Ahana wants to trouble Saransh and Rudra further. She wants their admission to get cancelled from the school. She plays a good bahu’s role in front of Sharda.

Sharda wants to convince the principal. Rahul thanks Prisha for supporting him. Prisha is worried that Rahul framed her. She meets Neerja and tells her that Rahul has ruined her marriage. Neerja explains Prisha that Rahul has done wrong and she will speak to him about the matter. Prisha wants Neerja’s help. Neerja tells Rahul that Prisha is facing a lot of problems. She wants him to free Prisha from the troubles. Rahul gives up on her insistence. Neerja informs Prisha that Rahul is ready to fix up things and apologize for his doings. Prisha gets glad to know that Rudra and her career will get saved. Will Rahul really keep up his word or cheat Prisha once again? Keep reading.