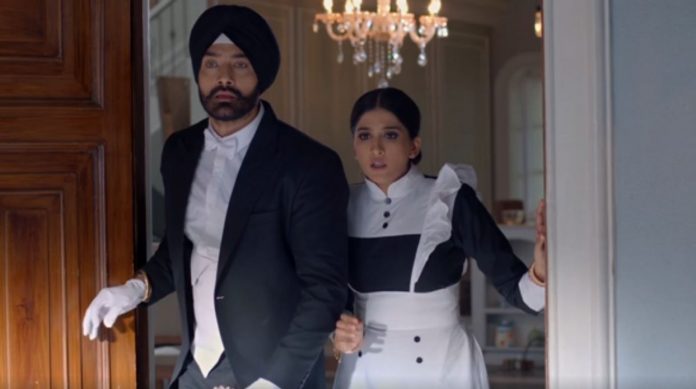 Choti Sardaarni 1st October Written Update New entry Sarabjeet and Meher work hard to fulfill Martha’s orders. Meher isn’t worried for herself, but Sarabjeet. Even he is worried for Meher more. She takes care of him. They land into a beautiful moment. She expresses her respect towards her husband, who is ready to do anything for her sake. She shoulders him to share the load. He doesn’t care for his dust allergy.

Meher worries seeing him sneezing. On the other hand, Kulwant tries to find the truth from Seema. She assumes that Vikram is Manav and wants to confirm it. She tries to ask Seema about her son. Seema tells that she is a heart patient. She takes medicines. She tells that she is delighted to get Aditi as her Bahu. Kulwant asks her if she has any more children. Seema tells Kulwant about her miscarriages.

Kulwant learns that Seema has kept her son away from her for 25 years and didn’t see his face just to fulfill a pray for his long life. Kulwant can’t believe it. Seema tells her that she has seen Vikram after 25 years when he returned from the US. Kulwant recalls that she is talking of the same time when she killed Manav. She realizes that Vikram is Manav and he is acting on Surya’s request. Meanwhile, Martha creates an issue because of Sarabjeet’s sneezes.

Meher tells that he has a dust allergy. Martha asks if he lives in any palace that he catches a dust allergy. She insults them. Sarabjeet doesn’t want Meher to upset Martha, else they won’t be able to convince her. Kulwant understands the entire matter. She thinks Surya has fooled Seema for a reason. She is angry that Manav survived the attack. She knows that Manav won’t let the truth to anyone. She is relieved thinking even Meher won’t know it. Sarabjeet calms down Meher. She sees him controlling his sneezes and falling sick. He asks her to keep working hard.

Moreover, Param is kidnapped. The evil couple learns that Param is a rich boy, he is Sarabjeet Gill’s son. They decide to demand a huge ransom from Sarabjeet. Param wakes up and begs them to leave him free. The lady tells that she will free him if he tells his parents number. He helps them unlock their phone. The couple gets to see his contacts to reach for a ransom.

Amrita finds hard to console Karan. Yuvi wonders where is Param, when he was on the way to meet Karan. Sarabjeet and Meher take some rest. Martha hands over the food to them. She gives them ten minutes break. Sarabjeet cheers up Meher. He is thankful that Martha has at least given them the food. Meher recalls Sarabjeet used to eat like a king before. She feels bad seeing him.

Furthermore, Aditi and Manav learn the problem faced by Meher. Manav assures that he will save Meher. Aditi prays for Meher. Kulwant meets them to anger Manav more. Manav recalls the way she had tried to kill him. He has to keep his promise to Surya and controls his anger. Kulwant tells that Vikram and Aditi are made for each other. Manav angrily hurts himself by recalling his past. Seema worries for him. Kulwant gets it confirmed that Vikram is Manav. She tells Seema that Vikram would be fine, since he has survived many such big wounds. She reminds him the murder attempt and provokes him.

Meher apologizes to Sarabjeet for getting him insulted. Sarabjeet tells her that its a temporary phase, they shall overcome the problems soon. He asks her to think of their children, who would be in peace with the family. He assures that he will fix everything. They don’t know about Param’s kidnapping and Karan’s struggle without Meher. The kidnappers call Sarabjeet and Meher for a ransom, but fail to get through, because of Martha.

Soon, the family learns that Param is kidnapped when the kidnappers call Harleen to demand a ransom. Manav promises to save Param. Martha tells Meher about her daughter Angel, who couldn’t get treated for her disease even by the best doctors. Meher tells Martha that she can treat Angel and help her recover. She asks for a chance. Martha agrees to let Meher try and get handicapped Angel back on her feet.

Reviewed Rating for this particular episode Choti Sardaarni 1st October Written Update New entry: 4/5 Fast paced story. Manav’s entry in Serbia to rescue Meher is awaited.
This rating is solely based on the opinion of the writer. You may post your take on the show in the comment section below.