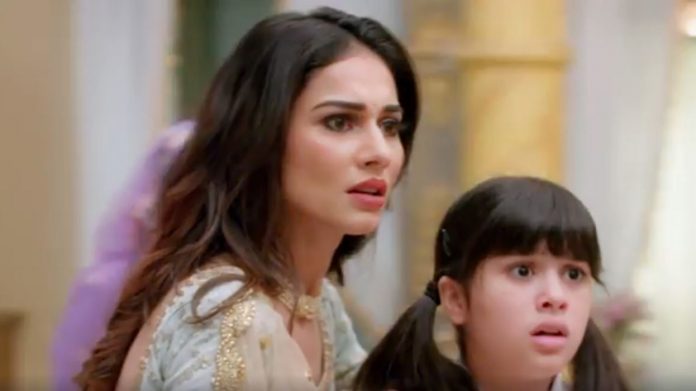 Pavitra Bhagya 1st October Review Update Reyansh’s past opens up Praniti gets surprised with Reyansh’s efforts. Jugnu and family wish her happy birthday. Praniti misses Reyansh and waits for him for the cake cutting. The family sings for Praniti. Reyansh stays away from Praniti and watches her cut the cake. Jugnu catches him. She asks him why is he hiding when he had himself baked the cake.

Reyansh tells that he was just going for a jog. She catches his lies. She knows that he has no courage to face Praniti. She threatens him of her anger’s next level. She tells that he should come along, else she will go bald. He doesn’t want his daughter to go bald. He agrees to go with her. They join Praniti, who gets a relief on seeing him. Praniti and Reyansh find peace in each other’s company. Reyansh feeds the cake to Praniti.

They have a moment of joy. Praniti tells Reyansh about Navya’s plan to bake a cake for her. Maan gets delighted to know it. He wants Praniti to feed him Navya’s baked cake. The family sings and dances. While they are in the middle of celebrations, Baljeet arrives to hinder. She poses her strict behavior. She tells them that Praniti’s birthday is worse day in their lives.

The family is shocked to know it. They leave the house and come to their ancestral haveli. The boys don’t like the house. Jugnu likes the haveli. Reyansh has bitter memories of his past with the house. He feels sad to recall his mother. He misses his mum. He recalls the painful time of her suicide. Baljeet told him that his mum committed suicide and left them forever. Praniti finds him tensed. She tries to find the matter.

Reyansh deals with his sorrow. Baljeet intentionally puts him into pain. She tells that much things will change, since the house had shown them really bad times. She regrets to come back home. Praniti tells that they can make their time better by their actions. Baljeet asks her to use her mind rather than tongue. She tells that none can save their business now.

She asks Praniti to share the room with Reyansh, since this haveli doesn’t have many rooms. She commands Praniti to leave if she has any objection. Jugnu tells them that Praniti will stay with her. Jugnu tells that they will stay together. Praniti agrees with her. Baljeet is left furious. Jugnu tries to cheer up Reyansh. She tells that she had been in an orphanage, which was worse, its better than they are together in the haveli. She tells that they will be sharing the room.

Reyansh doesn’t want to share the room with Praniti. Jugnu tells that she used to share her room with twenty mates. Praniti doesn’t want Jugnu to go away from them. Praniti asks Reyansh about his problem. Reyansh hides the actual problem, which she senses. He tells her that the house is really inauspicious. She asks him the reason. He recalls his mum’s suicide. Maan decides to marry Navya. Maan and Navya get married with Reyansh’s help. Reyansh announces their marriage to Baljeet and gets slapped. Reyansh doesn’t want Baljeet to disrespect Navya.

Reviewed Rating for this particular episode Pavitra Bhagya 1st October Review Update Reyansh’s past: 4/5 Reyansh wants to support Baljeet and never let their ties end. He will soon learn about Baljeet’s murder crime. Reyansh’s mother was murdered by Baljeet. This truth will break their bond forever. It will be interesting to see what Reyansh does after knowing his Dadi’s misdeed.
This rating is solely based on the opinion of the writer. You may post your take on the show in the comment section below.