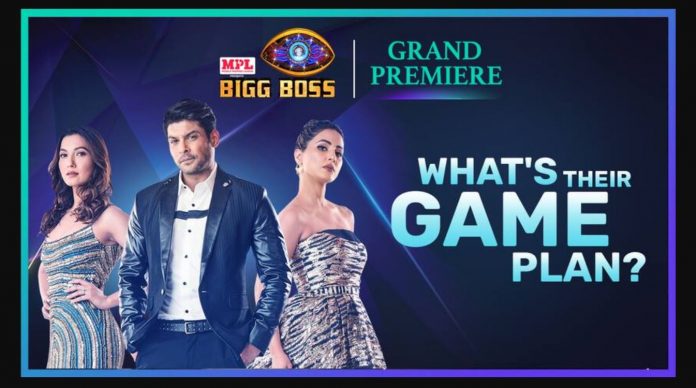 Bigg Boss 14 3rd October 2020 Written Update Live Salman Khan Grand Premiere The global pandemic has stopped the country for six months. Bigg Boss stays unaffected by the pandemic. Bigg Boss promises a high entertainment. Salman welcomes one and all in his show’s new season. Bigg Boss comes with Season 14. Salman defines the real entertainment, admiring the power and reach of Colors entertainment channel. Salman presents some humour around the country’s changed situation. The contestants on the show get an entry into the Bigg Boss house after a self quarantine of 14 days to prevent the pandemic from spreading further.

The makers take all possible precautions on the sets to welcome the guests. Salman later addresses the guests on the virtual screens. He shows the empty stadium which is a result of the safety measures to stop Coronavirus. He meets his lovely audience virtually. He mentions the three people who have already entered the Bigg Boss house. He introduces Siddharth Shukla, Gauahar Khan and Hina Khan, the winners of the last seasons of Bigg Boss. He wants them to lead the introductions of the contestants.

Moreover, the three of them will be posing new challenges to the contestants. They will rule and dominate in the house like the last times. Siddharth promises to grant peace to the person who serves him the best way. He takes over the bedrooms to ruin the sleep of the contestants.

Siddharth, Gauahar and Hina get their zones in the house to decide on the house mates’ lives for the next 14 days. Salman tells that the contestants will be going to the confirmed status to go to the next level after bearing the tortures by the three seniors. He remarks that the contestants will not get any Sukh(happiness), but just Dukh(sorrow) and Bhook(hunger). Salman welcomes the three seniors and clarifies on the social distancing format observed on the show. The grand premiere begins with the rocking performances by the trio. The seniors are the ex-contestants and winners, will be seen in a different light. Salman mentions the game changing rules.

The show presents a view of the luxurious house, with amenities like a mall, theatre, spa and a restaurant. The amenities will be giving a pre-lockdown feel to them. The introduction of the contestants along with their reality videos are seen. Their introductory performances on the grand premiere episode fill up the episode. TV actor Eijaz Khan becomes the first contestant to appear on the show. Followed by a South Indian actress, Nikki Tamboli, presenting a performance on an item number.

Eijaz speaks in his reality video. He states that he never thought of doing Bigg Boss, but took up the show taking it as the biggest hurdle in his life. He has worked in many TV shows and movies. He reveals that he had performed dance with Salman Khan when he started his career. He likes to stay with animals instead of humans. He was much happy with social distancing during the lockdown. He doesn’t like touch factor that happens in the Bigg Boss house. Meanwhile, Nikki is a naughty, cheerful, sizzling beauty from the South film industry. She is a bold girl in real life as well as reel life. She tells Salman that no girl can give her any competition in the house. She is ready to play with the hearts of the boys in the BB house. Both Eijaz and Nikki get selected by the special audience and the senior judges panel. The duo get an entry into the BB house.

Eijaz and Nikki perform a task to impress the seniors. Both of them succeed in the task and get confirmed entries in the house. Cutting down the long conversations and introductions to the minimal size of the written update for easy reading, we bring the live updates of the show with the important details on the show.

Salman introduces the next two contestants, the popular couple of the Indian telly town, Rubina Dilaik and Abhinav Shukla. The couple met while doing a show 12 years ago and didn’t connect well. They reconnected six years back and become the highlight in each other’s lives. The couple performs on a sizzling number before meeting Salman on the stage. Salman puts them to test for the BBQ to test their quotient.

They get the task to impress the special audience. A press conference surprises them to pose the questions. Salman introduces the executive news editors, forming a panel to question Rubina and Abhinav. Rubina and Abhinav present their strong bond of marriage. The couple is sure to win the trophy and take it home, no matter who wins. Rubina certainly adds that the situation in the BB house won’t change her relation with her husband. Salman gives them a kissing challenge, putting them in an awkward situation.

Abhinav gets witty and passes the challenge. Abhinav get his entry confirmed while Rubina gets rejected by the special panel. Abhinav meets the three judges, who rag him and scare him by a daring task. Abhinav gets sporting and fulfills the task to get an entry into the house. Jasmin Bhasin showcases her innocent appeal in the reality video. After appearing in Khatron Ke Khiladi, she becomes a part of Bigg Boss 14. Salman welcomes Jasmin on the show.

Jasmin gets selected instantly by the special audience, the Toofani seniors, Siddharth, Hina and Gauahar. Salman advises her to have high BBQ to stay in the house for a longer period. Jasmin meets the seniors before entering the house. She faces a torture by them while Gauahar poses questions to her. They test Jasmin and also prepare her for the worse days inside the BB house. Siddharth wants Jasmin to be strong. Few clashes begin in the BB house between Eijaz and Nikki, who took an entry in the house together.

Nishant Singh Malkhani, TV actor, born in Dubai, raised in Delhi, joins the show with a strong perspective and personality. He is possessive about his personal space. He mentions his qualities and flaws in his introductory video. He feels the need to win the Bigg Boss Season 14. Being hot-tempered, he feels it will be tough for him to adjust in the house. His motive behind taking up the show is clearly to test his patience level to know himself better. He wants his fans to know him as well. Nishant gets a welcome from Salman. Nishant is ready to take up audience’s decision on his stay on the show.

Salman finds him a multifaceted person. Shehzad Deol, Indian actor and model, joins as the seventh contestant on the show. Salman introduces the next contestant, Sara Gurpal. She is a popular trendsetting Punjabi singer-actress. Sara sings her lovely song from the hit Punjabi album. Sara judges Nishant and Shehzad’s heroic acts in the three requisite tasks of action, entertainment and romance.

Shehzad gets selected by the seniors. Nishant faces the rejection. He gets the rejected stamp on his forehead Eijaz and Nikki welcome Shehzad inside the house. Jaan Kumar Sanu is also a contestant from the singing background. Salman advises him to be positive and joyful in order to survive in the BB house. TV actress Pavitra Punia joins as the tenth contestant on the show. After her dance performance, Salman introduces Pavitra to Jaan Kumar. After knowing their personalities, Salman explains the BBQ test to them. He questions them himself.

Pavitra gets selected for her sincere answers. Jaan is rejected by the Toofani seniors panel. He joins Rubina and Nishant. Pavitra meets the seniors, who give her an important task. Pavitra observes the house mates. Salman reveals about Radhe Maa entering the house to perform a special prayer of purification for the arriving house mates. The last contestant Rahul Vaidya makes an entry. Rahul, a singer-performer by profession gives a contrast striking introduction about himself. He claims to be a simpleton and down to earth. He considers himself as an ambassador of love. Rahul sings a medley of Salman’s songs leaving him impressed. Rahul also impresses the seniors by his liveliness. He gets selected. He faces a new challenge posed by the seniors, who will decide his normal living in the house. Salman tells about the BB house turning into a battle ground. He wraps up the show until the next episode to be aired on Sunday, 9 PM.