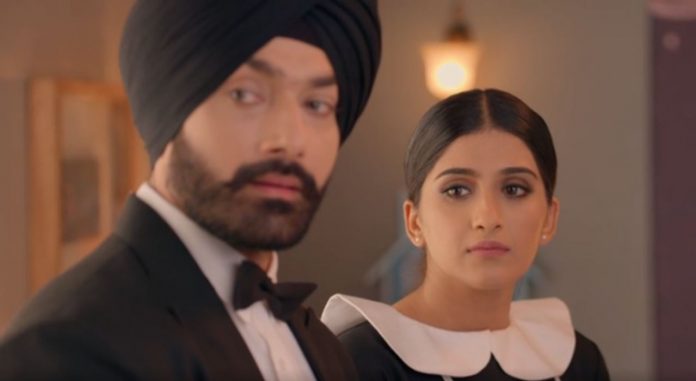 Choti Sardarni 3rd October 2020 Written Update Meher and Sarabjeet feel that they have got a chance to change Martha’s decision, so that the court verdict gets in Meher’s favor. Meher asks Sarabjeet to get some of the herbs she needs for treating Angel. Manav lands in Dubai to get a connecting flight. He plans to surprise Meher. He looks for Meher on hearing her name at the airport. He meets a little girl Meher, who returns his fallen wallet. He gets glad and takes it a good omen that he already got Meher.

Meher makes a good bond with Manav on their first meeting. Manav promises her that he will never get away from Meher. He makes Meher his good friend. Manav gets Aditi’s call and disconnects. He wants to be with Meher. He doesn’t think anyone can separate them now. Meher and Sarabjeet work hard to make the herbal paste for Angel. Meher gets hurt while grinding the herbs. Sarabjeet asks her to guide him, he will do the work.

She tells that she knows the right proportions to add. She tells him that she has done this many times in her life. He sees her hand hurt by the herbs and thorns. He kisses her hand. He tells that he will grind the herbs. She wants to go back home to her children. Martha orders him to polish the shoes. She asks him to clean it well and stop helping Meher. Meher tells Sarabjeet that she can’t see him polishing the shoes.

Sarabjeet reminds that he has polished the shoes at the Gurudwara as well. He worships any work. He tells her that he will do the work. Meher feels sad. On the other hand, Harleen is shocked by the kidnapper’s huge demand of 50 crores. She tells the family that she will pay the kidnappers and get Param back. Kulwant tells them about a don Kishan, who would help them in handling the kidnappers. She tells that everyone is scared of the don.

Aditi tries to inform Vikram about Param. She wants his help in Param’s help. Seema calls Vikram. Manav accepts her call. Seema informs him about Param’s kidnapping. Manav is shocked to know it. He learns that Meher and Sarabjeet aren’t reachable. He assures her that his team will be finding Param soon. Meher and Sarabjeet’s hard work goes on. Param cries a lot and faints down. The kidnapper wonders if the family informed the police to avoid paying the random.

Manav learns about the psycho kidnapper, who kidnaps little children for money and then kills the children. Manav asks Devraj to take the entire team and find Param at any cost. He wants Param safe. Sarabjeet falls asleep while polishing the shoes. Meher doesn’t sleep all night to make the herbal paste. Martha asks Meher how will she take Angel into sunlight while applying the herbs. She tells that if Angel wakes up, then she will throw everything away.

Sarabjeet and Meher find a way to take Angel out in a way that her sleep doesn’t break. They take the heavy bed outside to shift Angel into the sunlight zone in the lawn. Meher starts the application of the herbal paste on Angel’s legs hoping to cure her. Sarabjeet blocks the sunlight so that Angel doesn’t wake up. Martha asks them to be careful in their work. Sarabjeet doesn’t let Angel wake up. He asks Meher not to worry and continue the task. He has learnt a lot from his parenting techniques because of Karan and Param.

Meher misses the children. Sarabjeet asks Meher to request Martha to hand over their phones back so that they can talk to their children. Param cries for his parents. Harleen meets Amrita and Karan. She feels answerable to Sarabjeet and Meher. She doesn’t know Param’s state. Robby tells Harleen that he has arranged all the cash from Sarabjeet’s businesses. Meher requests Martha for her phone to speak to her sons. Martha tells that she will not spare her if the Ayurvedic treatment goes wrong. She tells that she will let Meher speak to her children at night. Sarabjeet wishes Angel doesn’t wake up until the herbal paste dries up. Angel wakes up and creates a havoc. How will Meher and Sarabjeet handle Angel’s temper? Keep reading.

Reviewed Rating for this particular episode Choti Sardarni 3rd October 2020 Written Update Full: 4/5
This rating is solely based on the opinion of the writer. You may post your take on the show in the comment section below.