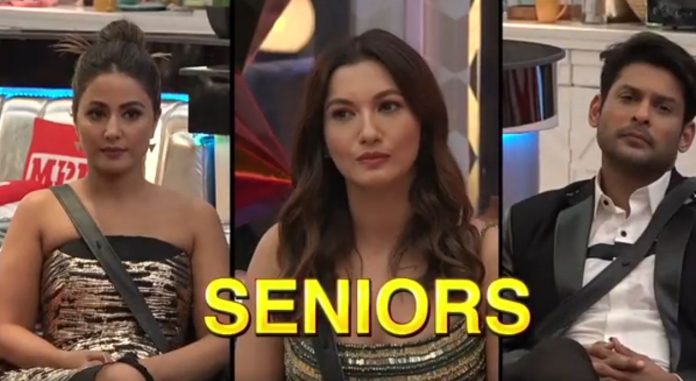 Bigg Boss 14 4th October 2020 Written Review Update Pehla Din Pehla Vaar Tellyreviews.com Like everyone has seen it well in the Grand Premiere episode that Eijaz Khan and Nikki Tamboli don’t get along well. They have issues around cleanliness and also his snoring habit. Nikki speaks to the house mates. She tells them that Eijaz is someone who can get easily annoyed. She has an OCD when it comes to hygiene keeping. She doesn’t like it when she finds someone breaking the norms of hygiene. She targets Eijaz on it. She also adds that Eijaz is good at heart.

Exclusive scoop on Eijaz and Jasmin’s conversation. Jasmin appears calm on the show. She tells Eijaz that she finds Nikki entertaining. Eijaz tells her that Nikki has tagged him a bad guy. Nikki ends the argument by tagging him the best guy. Eijaz calms himself down. He takes her words otherwise all the time.

Abhinav and Jasmin try to become the neutralisers for Eijaz and Nikki’s cold war. The atmosphere in the BB house begin to spoil. The temperatures soar high due to Nikki’s bold personality. Eijaz stops Nikki from being judgemental. He initiates upsetting conversation with Nikki.

The first day begins for the contestants’ on a difficult note. Gauahar addresses them to narrate the kitchen rules. She tells the contestants that none can even make tea without her permission. She reveals the powers given to the Toofani seniors. She wants the freshers to take her permission before entering the kitchen. For that, they need to just obey her commands. Moreover, Siddharth has the control on bedroom. He doesn’t permit them to carry anything out of the bedroom against his wish. The luxurious amenities get under Hina’s control. Hina will be permitting the contestants to take just seven items a day.

The contestants find it hard to stay in the same clothes for couple of days. The scene changes in Bigg boss, just like the world changed post the pandemic. As Salman stated, Scene Paltega, it happens for the contestants who didn’t imagine the unseen difficulty.

Also it gets announced that the rejected four contestants Rubina, Jaan Kumar, Sara and Nishant become the trouble bearers for a day. The house mates distribute their house tasks. Jasmin and Nikki get into a cat fight after the latter refuses to wash utensils. Nikki denies to take up any task that spoils her beautiful look. Jasmin doesn’t want Nikki’s domination right on the first day.

Things begin to draw more attention when Eijaz supports Jasmin. Jasmin and Eijaz team up against Nikki’s immature ways. Siddharth adds up more troubles for the contestants by snatching their rights to sleep in the bedroom. Having worked together on a show, Jasmin is acquainted to Siddharth. Jasmin requests Siddharth to allow her the entry in the bedroom. Siddharth doesn’t let her.

He questions the contestants over their claim on the bed. He wants them to earn the chance to get a peaceful sleep after a tiring long day filled with disputes and chaos. Siddharth gets flattered by talking to Jasmin. He doesn’t easily agree. The contestants are ready to do anything to get a comfortable sleep. Siddharth tests them on the very first day of the Bigg boss in house stay. Who will survive the tough challenges of the Toofani Seniors? How far do you enjoy this season? Comment your views in the section below.

Reviewed Rating for this particular episode Bigg Boss 14 4th October 2020 Written Review Update Pehla Din Pehla Vaar: 5/5 Quickly catching up the interest. Toofani Seniors literally bring a storm in the Bigg Boss house this time. The game changer trends, the new Normal rulebook adds up extra drama. More difficulties for the contestants mean more drama for the audience.
This rating is solely based on the opinion of the writer. You may post your take on the show in the comment section below.