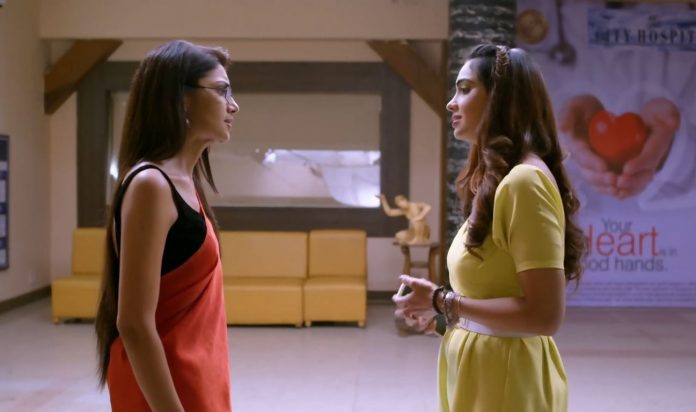 Kumkum Bhagya 5th October 2020 Written Update Rhea confesses Pragya meets Rhea to confront her. Rhea tells her that she understands her emotions, she will pray for Prachi’s recovery, but if Prachi doesn’t get fine, then she is there for Pragya. She tells that she will love her more than Prachi does, she will not let her miss Prachi. Pragya reprimands her for hurting Prachi and doing so wrong by acting sweet to them. She can’t believe that Rhea had planned everything against Prachi.

She tells Rhea that she never believed the family, who spoke against Rhea always. She tells that she had always shown pity towards her. She confronts Rhea about planning the accident. Rhea denies it. Pragya tells that Rhea is wrong, who doesn’t have a good bond with her father. She feels sorry for herself for misunderstanding Rhea. She had tried to become Rhea’s mum. She didn’t know Rhea wanted to ruin her family.

She curses the day when she started liking Rhea as her daughter. She wants Prachi to be back to her. She tags Rhea a selfish girl. She is devastated. Rhea accepts that she is selfish, she had done everything because of her life’s biggest problem, Prachi. She tells that Prachi snatched her family, friends and love as well. She accuses Prachi for snatching her dad, for snatching her lover. She can’t accept Prachi taking her place.

She expresses her hatred for Prachi. She tells Pragya that she was tired of hearing Prachi’s praise. She expresses that she feels terrible when her dad wishes to have a daughter like Prachi. She feels Prachi has snatched Abhi from her. She holds Prachi responsible for killing her from inside, for assassinating her from the family’s heart. She can’t love Prachi by accepting her as a sister. Pragya understands Rhea’s actual problem.

Rhea hates the comparison between Prachi and her. Rhea doesn’t deter and accept her crimes. She tells Pragya that Abhi and Ranbir always support Prachi. She accepts about making Prachi’s MMS to defame her, but Prachi wasn’t bothered. She wants Prachi to die this time. Pragya slaps her. Meanwhile, Ranbir stays worried for Prachi. He asks the nurse about Prachi. He learns that Prachi is stable now. Ranbir is glad and thinks to inform Pragya about her. Pragya wants Rhea to limit her poison from ruining Prachi’s life.

She doesn’t think Prachi’s goodness have snatched Rhea’s happiness. She asks Rhea to ask her dad why does he like Prachi more than her. She knows her daughter is always right. Pragya feels Rhea is really at fault this time, no emotion can justify her hatred for Prachi. She tells that Rhea has hatred that has hardened her heart, she doesn’t deserve any love. Sarita overhears Rhea’s confession. She insults Rhea and her upbringing. She wants Rhea to face the insult and curse. She tells that Rhea’s blood is at fault, she has no family values, she has failed her dad’s upbringing. Rhea disrespects Sarita in front of Pragya.

She threatens Sarita’s life. Sarita explains her the difference between Prachi and her. She wants the world to know Rhea’s jealousy. She predicts that Rhea’s jealousy will ruin her life one day. She curses Rhea. Pragya stops Sarita from cursing Rhea. Sarita tells that if Rhea didn’t get her parents’ love, then she can’t ruin someone’s else. Sarita tells that Rhea’s mum is happy after abandoning her. She adds that even her mum would have loved Prachi as well. Rhea is hurt by Sarita’s words. Pragya wants her to leave from their lives.

She ends her relation with Rhea. She doesn’t want Rhea to harm her again. Rhea tells Pragya that she is jealous that she never got her mother’s love, just like Prachi didn’t get her father’s love. She doesn’t want to become an orphan. Sarita curses that Abhi will also leave Rhea one day, since Rhea has ruined her fate on her own. Pragya feels sorry for Rhea. She doesn’t know their bond that always melts her heart for Rhea. Rhea cries on losing Pragya. She feels Prachi has snatched all her dear ones. She drives dealing with her grief and meets with an accident. Will Pragya learn the truth that Rhea is her own daughter? Keep reading.


Reviewed Rating for this particular episode Kumkum Bhagya 5th October 2020 Written Update Rhea confesses: 5/5
This rating is solely based on the opinion of the writer. You may post your take on the show in the comment section below.