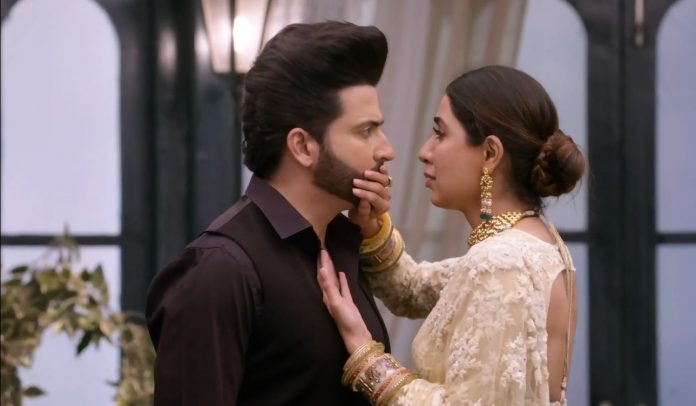 Kundali Bhagya 6th October 2020 Written Update Karan rejects Mahira Kareena gets puzzled to see Ramona hugging Preeta. She wonders why is Ramona changing towards Preeta. She doesn’t know that its Mahira under the veil. Ramona announces Karan and Preeta’s dance. Mahira dances romantically. Karan gets surprised. He learns that she is Mahira. Mahira runs away from there after telling her name to him. Karan gets a shocker.

Sherlyn expects a storm coming. Kareena tells the family that Preeta has run away, its so embarrassing for them. Karan goes after Mahira to know the truth. Sarla thinks Karan and Preeta had a fight. Janki is the uninvited guest in Pawan’s house. She gets caught. Karan confronts Mahira for her move to take Preeta’s place. Mahira shamelessly tells him that its her reception with him. She is glad that he has seen her first.

She wants him to tell the family about her. She doesn’t want to shock him. She thinks it will be good if he reveals it. Karan finds it totally mad to take Preeta’s place. He calls it wrong. He wants to know where is Preeta. She reminds him that they were getting married, she has been wronged by Preeta. He asks her about her move to wear Preeta’s nuptial chain. Mahira shouts that she is his wife. She asks Karan to forget their argument and just remember that they were happy together.

She reveals that she loves him and wants to live her life with him. Karan is speechless. He accepts that he wanted to marry her before, but now Preeta is his wife. Mahira argues with him. Meanwhile, Sherlyn is angered to know that Mahira had sent Preeta to Prithvi. She wants to stop Prithvi and Preeta’s marriage. She can’t lose her love Prithvi. She determines to reach Prithvi. Rishabh stops her from leaving.

He asks Sherlyn about her outing. He is ready to follow her to know if she is doing anything wrong. Sherlyn lies to him that she was just parking the car right. Rishabh asks Sherlyn to look after Mahira. He wants her to trust her, he can manage the parking issue. Sherlyn doesn’t want Mahira to win. She wants Mahira to call Pawan and stop this madness. Mahira asks Karan what does he mean. Karan tells that Preeta is his wife now. Mahira vents anger on him. She apologizes to him for her crazy behavior. She is too stressed and afraid to lose him. She asks him to confess that he loves her. Karan doesn’t admit it. He doesn’t love Mahira.

She threatens to die if he doesn’t love her. She begs him to promise her to accept her as his wife. Karan explains her that he respects all his relations, he respects his marriage as well, he is married to Preeta now. He tells that he wants Preeta to leave his house, but he respects their relation until she is with him.

He wants Mahira to stop her madness and not meet the guests as his wife. He asks her to leave the house so that she doesn’t get hurt seeing Preeta and him. He wants to go and find Preeta. He is sure that Mahira won’t tell him anything. Shrishti meets with an accident. Furthermore, Pawan keeps Preeta captive. He wants her to marry Prithvi. She warns him about Karan. He shouts on her. He doesn’t want her to anger him. Preeta is badly trapped. She wishes Janki informs someone about her kidnapping. She expects Karan to save her.


Reviewed Rating for this particular episode Kundali Bhagya 6th October 2020 Written Update Karan rejects Mahira: 4/5
This rating is solely based on the opinion of the writer. You may post your take on the show in the comment section below.