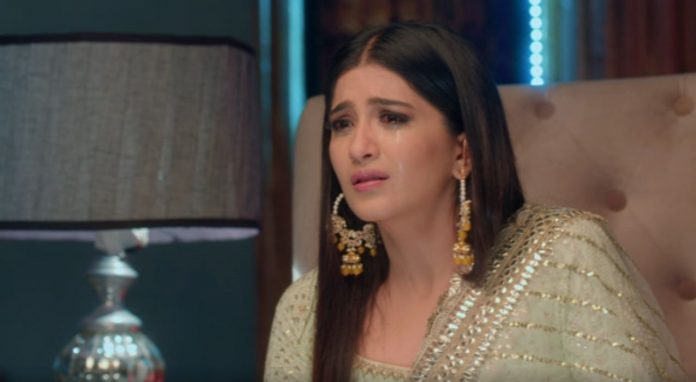 Choti Sardarni 9th October 2020 Written Update Meher reveals her past Manav reaches Meher to meet her and reveal the truth of his survival. Sarabjeet finds Meher waking up. He asks her to wait until he checks the door. They get surprised to receive the flowers from the hotel owner Gurmeet Gogi. They don’t get to see Manav. Sarabjeet and Meher get the VIP treatment. Manav reaches the wrong room. He learns that the guest has gone out.

Manav is asked to wait for the guest in the lobby. He wonders where did Meher go. He waits to wait for her. He doesn’t think she will go anywhere far from him now. Sarabjeet takes care of Meher. They see a shooting star and make a wish, though they don’t believe much in it. They act that they don’t believe in it. They silently make a wish for their union. They have a moment. They don’t confess that they have made the wish.

Meher tells Sarabjeet that he can’t lie to her, she had seen him making a wish. He lies to her again. She asks him to just tell his wish. He tells her that he just wishes to get her. She gets emotional. She also wants to reciprocate his love. She tells him that she has also wished for him. She sings his praise once again since she never met such a nice person in the world. She tells that she is incomplete without him.

Sarabjeet gets too happy to know her feelings. He wants her to remember her feelings when she comes back after the court hearing. He tells her that he is ready to take their relation ahead but he is waiting for her permission. She gets shy. She tells him that he should take a step ahead now. He realizes that she is ready to move on with him. They make a heart with their names written on the paper. He tells them that their love will unite them. Meanwhile, Param is terrified by the trauma.

Harleen finds him waking up after a nightmare. She pacifies Param. Meher isn’t sure that she can live with Sarabjeet and their children. He wants her to trust him. He promises to protect her and not let her go away from him ever. He tells that their bond is of lifetime. He eases her tensions. He wants her to relax and not think of the results. He tells her that she has always been true to him. He loves her for being such a good hearted person.

He tells Meher that none can hurt their relation. He doesn’t want her to have any worry. Manav waits for Meher in the lobby. He tries to find her. Sarabjeet tells Meher that her truth and courage are her strengths. He feels he got habitual to her. Even he can’t live without her. Sarabjeet tells that he wanted to confess a truth to her about his love. Meher wants to confess about Manav, who looks like Vikram. She tells Sarabjeet that she wants to get rid of every burden by sharing the last truth hidden from him.

Meanwhile, Kulwant tells her sons that she met Seema, who is a heart patient. She reveals that Vikram is Manav, but he loves Seema a lot, he will never reveal the truth that he is Manav, else Seema will die by the shock of her son’s death. Kulwant feels Manav will never pose a threat to her. Param calls up Meher and Sarabjeet when she is about to tell about Manav. Param wants Meher to tell some story to him and put her to sleep. Meher thinks to tell Manav and her love story. She remembers Manav after a long time.

She reveals about the storm ruining the couple’s life, the guy’s birthday was special and the girl made a cake for him, he was called at the girl’s house by cheat, the girl’s family cheated the guy and killed him, they both got the wound on their hearts by the girl’s mother, the guy was stabbed on his back in front of the girl, when he had come to ask for the girl’s hand. Sarabjeet finds her crying while narrating the story.

Meher tells that the girl’s mother killed the guy mercilessly and also killed the girl’s dreams. She feels Kulwant really killed her happiness that day. Meher cries a lot while missing her first love Manav. Meher shouts to Manav while missing her. Sarabjeet realizes that its Meher’s love story which was left incomplete because of Kulwant. What will Sarabjeet do now? Keep reading.

Reviewed Rating for this particular episode Choti Sardarni 9th October 2020 Written Update Meher reveals her past: 4/5
This rating is solely based on the opinion of the writer. You may post your take on the show in the comment section below.