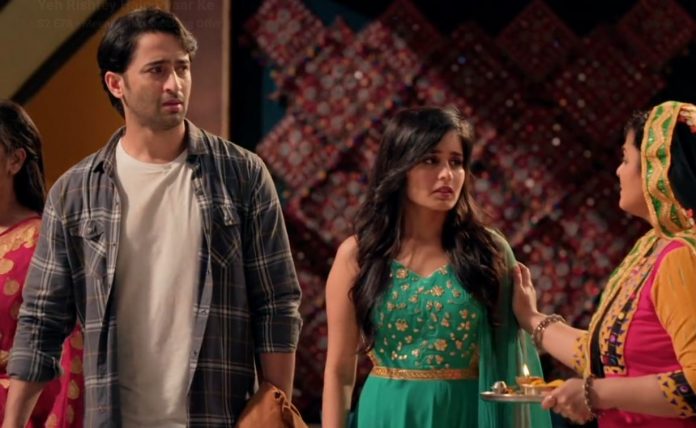 Yeh Rishtey Hain Pyaar Ke 10th October 2020 Written Update Abir takes Kunal and his wishlist. He finds it really funny. Kunal realizes that Abir had written a letter to fulfill his wish. They get happy to recall their childhood memories.

Kunal asks Abir not to leave him and go away. He can’t live without Abir. Abir explains that he has to go to keep the same harmony and sweet essence in their relations. He doesn’t want their relations to spoil by the family politics started by Meenakshi. Abir tells that they will not stay away, they will always be connected.

Parul overhears them and feels sad. She goes to speak to Meenakshi. She finds Meenakshi still rushing after property distribution. She asks Meenakshi if she is still talking to the lawyer when the relations are breaking in the family. She counts her favor on Meenakshi. She had given away her son to Meenakshi and served the family since years. She has longed to hear Kunal calling her mom.

She tells that she doesn’t want to break the family. Parul asks if she isn’t leaving the family. Mishti reveals to her that she is playing a drama of leaving the house so that she can mend all the relations at once. She hopes her plan brings Kuhu and Meenakshi on the right path. Meanwhile, Kuhu tries to convince Abir to not leave the house. She wants him to think of Kunal, who would shatter without him.

Abir asks her to come back home. She also wants to return to Kunal. She is helpless because of Varsha. Abir tells her that Mishti’s decision is final, he can’t change it. He tells that they are really leaving. Kuhu informs Kunal that she tried hard to convince Abir, but failed. Abir is also sad. Mishti wants him to trust her that she is doing everything for the family’s good. Abir trusts her a lot.

He doesn’t question her. Abir and Mishti pack their bags to leave. The family is worried. Meenakshi is stressed. Abir and Kunal save the family photo from falling down. Meenakshi and Mishti get to see this moment. Abir tells Mishti that they shall leave now. Nidhi asks Mishti to not go away. Mishti and Parul are together in the plan. Meenakshi asks Mishti not to meet her if she wants. She tells that she has decided to throw out Kunal, Kuhu and Parul from the house if Abir leaves.

Mishti asks Meenakshi to do anything. She tells Meenakshi that Kunal is successful and independent, he can take care of Kuhu and Parul by shifting to a new house. She asks Meenakshi to think if Kunal can’t run his own business if she disowns him. She tells that Meenakshi will be left alone, there won’t be anyone to dominate. She adds that Kunal doesn’t need her money. Kunal tells that he is talented enough to earn for his family. He also decides to leave the house if Abir goes away from him.

Mishti tells Meenakshi that the family stayed together by her fear before, but it won’t happen now. She wants to free everyone from Meenakshi’s fear. She ends the fear by opting to leave. Abir and Mishti leave the house. Meenakshi realizes her mistake. She gets Abir and Mishti home. Abir still feels Meenakshi is still playing a drama. He wants her to change genuinely.

Reviewed Rating for this particular episode Yeh Rishtey Hain Pyaar Ke 10th October 2020 Written Update: 4/5
This rating is solely based on the opinion of the writer. You may post your take on the show in the comment section below.