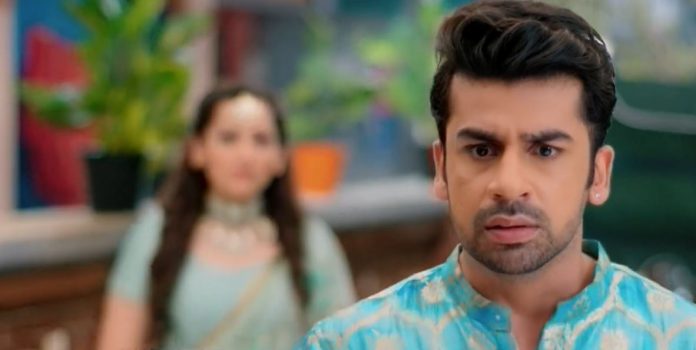 Anupama 12th October 2020 Written Update Paritosh learns Vanraj’s truth Anupama and Vanraj have their mehendi function going on. Vanraj’s name gets written on Anupama’s hand. Kavya also writes his name in the mehendi. She imagines to romance Vanraj. Kavya is lost in thoughts, while Rakhi exposes her in front of the family. Rakhi shows Vanraj’s name written on Kavya’s hand as well. Kavya is tensed while everyone is shocked. Kavya tells them that the mehendi artist made a mistake and wrote the name. She defends herself.

She tells that she called out Vanraj for some work, maybe the mehendi artist heard it and wrote it in the mehendi design. Rakhi asks her why didn’t she erase it off on seeing. Kavya blames her for distracting her and then creating a scene. Anupama tells Kavya that Vanraj’s name can’t get on anyone’s mehendi. She wants Kavya to wipe off the name from the mehendi. Samar wipes off the name and apologizes to Kavya.

She tells that Vanraj’s name was looking odd in her mehendi design. Nandini asks him why is he apologizing, when he has fixed everything. She likes the way he takes a stand for his mother. Kavya tells that its not her mistake. She is much angry. Anupama wants to apologize to Kavya. Baa asks Anupama not to apologize.

She wants Anupama to focus on her mehendi, since its her function. Vanraj is tensed seeing Kavya’s immature act. He gets a headache. Anupama wants to make tea for him. Jhilmil asks her to sit back. She goes to make tea for Vanraj. Rakhi taunts Vanraj for handling two marriages. She tells that any man will get a headache to have two marriages at the same time.

She tells that she means about Vanraj and Anupama’s marriage and then Paritosh and Kinjal’s marriage. Vanraj understands her taunt. Anupama tells that she will make a strong tea for Vanraj to relieve his headache. She leaves her place, which Kavya wants to occupy. She collides with Anupama and acts to fall. Anupama holds Kavya to help. Her mehendi gets spoiled because of holding Kavya.

She feels a bad omen when her mehendi is ruined. She gets crying. Kavya apologizes to her. Rakhi taunts that the mehendi function is really interesting, since Kavya has come to add up more entertainment. She wants to see how Vanraj manages two women. Vanraj consoles Anupama. He tells her that no bad omen will affect their relation. She shows his name written. She tells that no one can erase his name from her hand.

Later, Anupama tells Vanraj about their haldi ceremony. She is much shy. He tells that she is being shy as they are marrying for the first time, its been 25 years now. She tells that she still gets the new feeling even when she knows him well. She tells that she is lucky to get a loving husband and good in-laws, along with the naughty children. She tells that Pakhi was teasing her to plan a trip to Goa after the marriage. Vanraj asks if she wants to visit any temple.

Anupama tells that like couples go on a trip after marriage. Vanraj asks if she wants to go on a honeymoon. Kavya calls him and distracts him. Anupama’s nuptial chain breaks by his hand unknowingly. She gets too worried. She cries and makes him feel bad. Vanraj tells that he has bought a new nuptial chain for her. He asks her to wear it. He rushes to meet Kavya. Anupama feels restless due to the bad omens occurring. She wears another nuptial chain and makes prayers.

Moreover, Kavya is excited for haldi. Nandini wants her to stop the madness. Kavya doesn’t listen to her. Anupama’s haldi gets prepared. Baa doesn’t want to call Anupama’s family in the function. She wants to invite them for the marriage function. Samar takes Vanraj’s car to bring few things. Vanraj informs Kavya that he has bought a nuptial chain for her. He tells that he had kept it in the car. He learns that Samar took his car for work.

Vanraj gets worried. Samar gets busy in talking to Nandini. He finds her disturbed. She tells him that she has to meet someone. She avoids him. She is guilty to hide Kavya’s truth from Samar. She wishes Anupama’s happiness stay protected. Anupama is glad to know that Bapu ji will be doing her Kanyadaan. She has received much love from her in-laws. Baa tells that she is on Vanraj’s side. She asks Anupama about wearing the new nuptial chain. Anupama reveals that her old nuptial chain broke by mistake.

The family plans the haldi function and celebrates the happiness. Nandini stays troubled with her guilt. She thinks it would be better to explain it to Paritosh. She asks Paritosh to hear out first and then react. Nandini reveals the truth to Paritosh. She tells that Vanraj is going to marry Kavya. Paritosh is super shocked to know this truth. Nandini asks him to stop Vanraj and Kavya’s marriage. Paritosh finds Anupama and Vanraj performing on the stage happily. He can’t figure out Vanraj’s truth. What will Paritosh do now? Keep reading.

Reviewed Rating for this particular episode Anupama 12th October 2020 Written Update Paritosh learns Vanraj’s truth: 4/5
This rating is solely based on the opinion of the writer. You may post your take on the show in the comment section below.