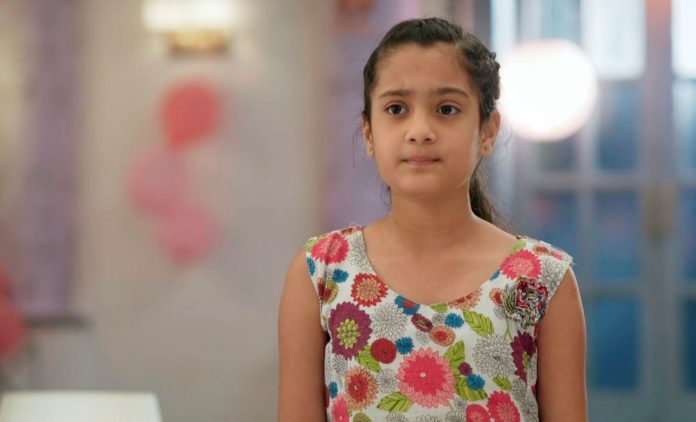 Yeh Rishta Kya Kehlata Hai 12th October 2020 Written Update Krishna berated Dadi wants Suwarna to look after Manish. Suwarna tells Dadi that Manish sleeps a lot after taking the medicines. Akhilesh tells them that doctor wants Manish to take good rest and didn’t change the medicines. He tells that they shouldn’t give any tensed news to Manish and be careful in discussions when Manish is around. Kartik and Naira pacify the baby. He tells her that they will go to the hospital to get the baby treated for stomach pain.

Naira tries a home remedy to treat the baby. She tells that she was alone in Goa when she raised Kairav, she knows such remedies well. On the other hand, Naksh gets to read Aditya’s message on Kirti’s phone. He gets angry reading Aditya’s claim on Krish. He asks Kirti if she is still in touch with Aditya. Kirti doesn’t know if he will believe her.

She tells Naksh that she isn’t in touch with Aditya, she has changed her number as well, but Aditya contacts her some how. He angrily tells her that its her personal matter, she may talk to Aditya if she wants. He tells that they are getting divorced now and nothing matters to him. She gets hurt by his words.

Naira tells Kartik that home remedies take time to work. Kartik asks Naira not to eat any spicy food that leads to trouble for the baby. He tells that he will take care of her food diet now. Naira feels he will become strict hitler once again. Kartik gets sweets for her. She refuses to him. He sweetly apologizes to her. He asks her for a dance. Naira tells him that she is too tired after putting the baby to sleep. Kartik and Naira have a romantic dance. Their moment breaks by the baby cry. Kartik feels the children have always played the role of enemies when it comes to their romance.

Later, Manish gets ready for his office. Dadi blesses him. She happily cries. Krishna meets him and tells that she had prayed for his recovery. Manish questions the family about her. Dadi asks him not to take any tension. She asks Krishna to get away. Manish tries to recall and stops Krishna. Krishna asks him if he remembers their friendship. She gets happy. Manish angrily blurts out the truth that Krishna came in front of the car resulting in the accident. He accuses her for being responsible for the accident.

Kartik and family were not aware of this truth. Naira worries for their reaction. Manish commands Krishna to leave the house at once. He gets too hyper. He turns dizzy. The family gets worried for Manish.

They rush him to his room and try to calm him down. Kartik gets annoyed with Krishna on knowing the truth. He wants Naira to answer him, why did she hide the truth from him. Naira apologizes to him. She reveals that Krishna wasn’t at fault, it was just an accident. Krishna tells Kartik that Naira is innocent.

She tells that she had gone to give Naira’s purse, she fell down in front of the car after a twisted foot. She reveals that Naira met with the accident while saving her life. She wants Kartik to scold her, but not Naira. Kartik’s heart melts. He doesn’t want Krishna to cry. He forgives Krishna and hugs her. He doesn’t want to react again. He apologizes to her. Krishna worries that Manish will make her out of the house. She doesn’t want to leave. She tells that she just wants to live with them. After a big drama at home, Krishna leaves the house on her own. Kartik and Naira learn about her leaving. Kartik tries to find Krishna and get her back.

Reviewed Rating for this particular episode Yeh Rishta Kya Kehlata Hai 12th October 2020 Written Update Krishna berated: 3/5
This rating is solely based on the opinion of the writer. You may post your take on the show in the comment section below.