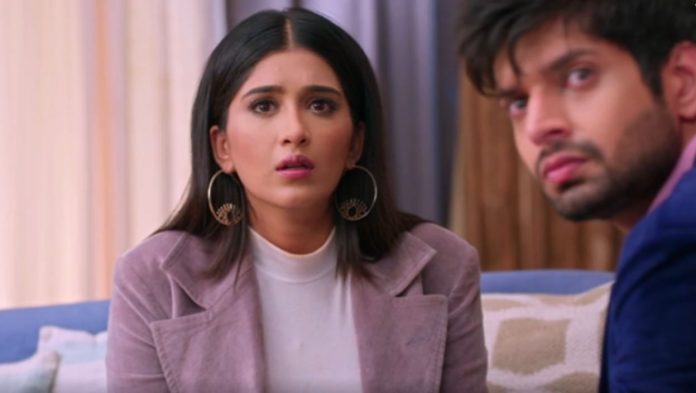 Choti Sardarni 13th October 2020 Written Update Meher Manav’s decision Meher tries to bring Manav to a realization that she is married to Sarabjeet now, while Manav is married to Aditi. They both try to come to terms with the horrible situation. She tells him that there is no way that they can unite now.

Manav tries hard to explain Manav. He doesn’t listen to any of her request to forget her. She knows there is a storm in his heart, just like her. She tells him that they can’t conquer time and fate. She exclaims that its their fate that played the game with them. She wants him to go to Aditi and his parents to stay happy. Meanwhile, Martha apologizes to Sarabjeet. Sarabjeet also makes an apology.

Martha tells that he was right about children, who can melt heart of a mother. She feels she was bitter and angry because of Angel’s illness. She now feels light and happy, that Angel got cured. She is happy that Meher and Sarabjeet brought her positive side back. She asks Sarabjeet to inform his children that Meher would be meeting them soon. She withdraws the case and surprises him. He is grateful to her.

Meher asks Manav to return home. Manav doesn’t listen to her and compels her to accept his love. Meher vents her anger by ruining the things around. She is tired explaining him that she can never return to him.

Sarabjeet informs the good news to Harleen. Harleen asks him to come back home soon. He tells that he will plan an anniversary party for Meher. He learns about Aditi and Vikram’s issues. Harleen tells Sarabjeet that Vikram may have an affair with someone as the pandit told them about his two marriages. Sarabjeet worries for Aditi. He wants to call Vikram and find out the truth. Sarabjeet calls Meher and informs her about the good news. He tells her that there is a big surprise for her.

Sarabjeet orders a cake to surprise Meher on their anniversary. The cake gets delivered. Sarabjeet tells her that Martha has withdrawn the case, now they can happily celebrate their anniversary. He wants her to finish the packing so that they leave for home. He expresses his love for Meher on the phone call, which angers Manav. Manav gets enough of Meher’s praise for her great husband. He finds a way to vent his anger too. He stabs the cake ordered for Meher by Sarabjeet on their first wedding anniversary.

Manav tells Meher that they separated a year back. He wants to know if Meher remembers his birthday or not. He shares his pain about the moment when Kulwant stabbed him. He tells that she should take it as fate that she won’t be able to cut the cake with Sarabjeet. He wants her to come with him and leave Sarabjeet. Meher tells him that everything had changed long time back. He wants to revert everything. He wants her to trust his love. He tells her that he can’t live without her, he will tell everything to Sarabjeet and ask for her freedom. He wants to beg Sarabjeet, who may understand his situation.

Meher doesn’t want him to threaten her. She isn’t scared of him. She tells him that she already told the truth to Sarabjeet. She knows Sarabjeet is great and won’t get affected by any truth. He tells Meher that Sarabjeet will some how learn about their love story. He asks her to imagine Sarabjeet’s reaction knowing he is not Vikram, but her Manav. He doesn’t think Sarabjeet will like the fact that Meher had a relation with Aditi’s husband in the past. He tells that Aditi will be broken knowing about their relation.

He tells that he will continue to love her, but this won’t be tolerated by Sarabjeet, who would also think of Aditi’s future. He emotionally blackmails Meher to accept him, since it was not his fault that Kulwant stabbed him and threw him into the river to make him out of Meher’s life. He just loved Meher and wanted a small happy family with her. He didn’t know he had to pay a big price for her love.

After crossing many hurdles, he feels miserable when Meher doesn’t acknowledge his true love. Manav is right on his front, but got too late, since Meher has already moved on with Sarabjeet. Meher can’t return to Manav now. Manav further reminds her of Harleen and others. He tells that neither Sarabjeet nor Aditi can tolerate the truth of their love. He senses that the entire family will break down. He isn’t scared of anything. He is ready to fight the world if Meher gets convinced. He tells that Sarabjeet won’t be such a great person to accept their love. Meher is tensed on hearing him. She asks Manav not to reveal the truth to anyone.

She pleads him to go away. Sarabjeet arrives with the good news for Meher, that Martha has forgiven her on the legal matter. He wants to take Meher home as soon as possible to their children, who are missing them a lot. Sarabjeet reaches Meher, while she is all tensed about Manav’s presence in the hotel room. Manav makes a leave after deciding to win her back. Meher feels just Sarabjeet deserves her love. She had loved Manav before, but now feels devoted to Sarabjeet.

She wants to explain Manav about her relation with Sarabjeet. She doesn’t want Manav to ruin it all for her. Sarabjeet hugs Meher and tells her that he loves her a lot. He finds her upset about the ruined cake. He tells that he will order another cake. He tells his plans of anniversary party after reaching home. He tells her about Harleen’s doubt on Vikram, since he is being away from Aditi since the marriage. He doesn’t want to spare Vikram if Aditi gets any sorrow. Meher fears to tell the truth to Sarabjeet which will bring a storm in many lives. She doesn’t want Aditi’s future to get in risk. She is sure to convince Manav some way. Will Manav and Meher decide to get separated with a mutual understanding? Keep reading.

Reviewed Rating for this particular episode Choti Sardarni 13th October 2020 Written Update Meher Manav’s decision: 4/5
This rating is solely based on the opinion of the writer. You may post your take on the show in the comment section below.