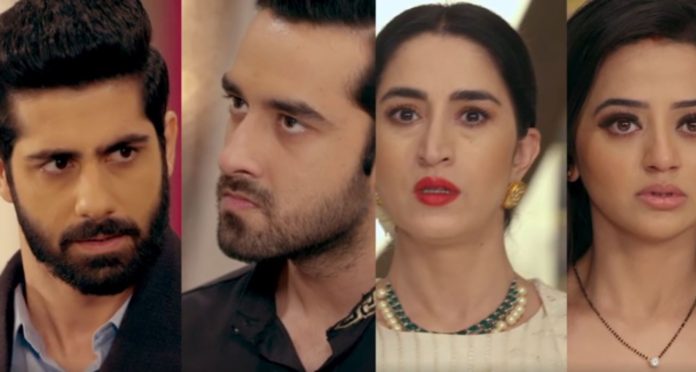 Ishq Mein Marjawan 14th October 2020 Written Update Vansh to kill Kabir Vansh questions Kabir on catching him in front of the entire family. He wants to know what is Inspector Kabir doing in his house. It gets revealed that Vansh had arrived home before time and got to see Riddhima with Kabir. Vansh has planned the late entry just to catch the intruder Kabir red-handed and expose him in front of the family. Vansh wants to tell Riddhima that he knows about her affair, her past with Inspector Kabir.

Vansh is saddened to see Kabir with Riddhima. He didn’t imagine that his wife will be cheating on him behind his back. He thinks Riddhima was meeting her love when he wasn’t at home, which is really a big deceive. He learns that Kabir had sent Riddhima into his life to spy on him so that he can get proof against him. He didn’t know that Riddhima is Kabir’s pawn. He is much depressed with Riddhima’s misdeeds. He exposes Kabir’s entire planning to the family.

Moreover, Vansh tells the family that Kabir is the secret he was talking about. He tells that Kabir had taken disguise to enter his house, which is wrong as per his duty. He asks Kabir if his duty allows him to enter anyone’s house by taking numerous disguises every day and plan troubles for the family.

Kabir loses his temper on Vansh’s instigation. Kabir tells Vansh that he knows about Ragini. He further adds that he is aware of Vansh and Ragini’s past, he will soon bring out the truth. He threatens Vansh to reveal Ragini’s murder truth. Vansh shows his anger to him and points the gun at him. He warns Kabir again to keep him away from his personal matters. He has already told that he didn’t kill Ragini. Kabir instigates him by calling him Ragini’s murderer, so that Riddhima believes him. Vansh is sure that Kabir is just making guesses.

He tells Kabir that he will never find out anything about his past. He challenges Kabir. Anupriya gets worried seeing her son at gun point, but doesn’t say anything so that Vansh doesn’t know her relation with Kabir. Riddhima also keeps numb and watches their bitter fight. Kabir asks Vansh to shoot him, he isn’t scared of anything. He angers Vansh more and more. He himself makes Vansh point at him. Vansh wants his enemies to get less, if his enemies aren’t scared of him. Kabir tells that he isn’t scared of him.

Vansh tells Kabir that he will shoot him right away and kill him. He tells that it will be his pleasure to kill Inspector Kabir. Riddhima runs between them to stop Vansh. She stands before Kabir to save him from Vansh. She gets terrified that Vansh will be killing Kabir. She can’t see Kabir dying in front of her eyes. Kabir keeps his lie that he has come to VR mansion to find out Ragini’s murder truth, but Riddhima’s concern for Kabir proves it all to Vansh.

Vansh realizes her madness for Kabir when she defends Kabir by going against her husband. He thinks that Kabir had come home to meet Riddhima, they had planned suspicious activities to mislead the family. Riddhima tries to speak up, but Vansh doesn’t give her any chance, since her time is over to explain. He feels he had given ample time and many chances to Riddhima already. Vansh shows his old avatar to Riddhima.

Vansh becomes sharp, fierce and dangerous for his enemies again. This time, Riddhima comes in his target zone. Will Riddhima make a mistake and get her past relation exposed in front of Vansh? Will she come up with another convincing lie? Keep reading to catch up latest news on your favorite shows. Don’t forget to rate the episode below.

Well, Riddhima really comes up with a story. She exclaims that she cares for Vansh, who shouldn’t be tagged as a murdered after killing Kabir. She stops Vansh from killing Kabir by the excuse that she can’t see Vansh getting jail. She plays a smart move and gets praised by Vansh. Vansh feels she really cares for him. She tells him that she needs him and even the family needs him, he can’t get jailed by killing someone.

On this note, Vansh spares Kabir’s life. Riddhima falsely reprimands Kabir to show Vansh. Vansh punishes Kabir by calling the commissioner and getting Kabir suspended from his duty. Kabir takes this as a big insult. Vansh tells Kabir that this is the punishment for entering his house in disguise. Kabir promises Vansh that Vansh’s destruction is close. He gives an ultimate warning to Vansh, who doesn’t care for his words. Kabir controls his anger and makes a leave after Riddhima saves his life.

Anupriya is relieved that her son got saved from Vansh’s rage. She is also glad that Vansh didn’t know Kabir and her relation. Riddhima also thinks its over now, there is no more drama, but Vansh breaks out another suspense. He reveals another mystery is coming up when the family meets for dinner. He tells that the dinner will get special with a special guest coming, that’s Sejal. He wants the family to meet Riddhima’s bestie Sejal and know more of the secrets.

Chanchal gets tensed that Vansh will be knowing their truth of kidnapping Sejal. Chanchal gets a nightmare about Vansh killing Aryan after Sejal reveals Aryan’s name behind her kidnapping. Aryan knows Chanchal’s fears. He tells her that he is well prepared for Vansh’s attack, he also got a gun to defend his life in case Vansh tries to shoot him. Aryan tells Chanchal that he will counter attack Vansh. Riddhima is still clueless about Vansh’s plans. She tries to ask him about Sejal’s kidnapping.

She confronts him if he had kidnapped Sejal. She starts believing that Kabir is partly right about Ragini’s case. She doesn’t want to doubt Vansh again. Vansh and Riddhima have a romantic moment while they play a game of basketball. Vansh angrily confronts her about hiding Kabir’s presence in the house. He questions her if she didn’t notice Kabir in disguise. He suspects her. Riddhima is left speechless. She realizes Vansh got to know about Kabir and her. Vansh promises to reveal another big secret on dinner when Sejal arrives. Will Vansh expose Kabir and Riddhima’s affair? Keep reading.

Reviewed Rating for this particular episode Ishq Mein Marjawan 14th October 2020 Written Update Vansh to kill Kabir: 5/5
This rating is solely based on the opinion of the writer. You may post your take on the show in the comment section below.