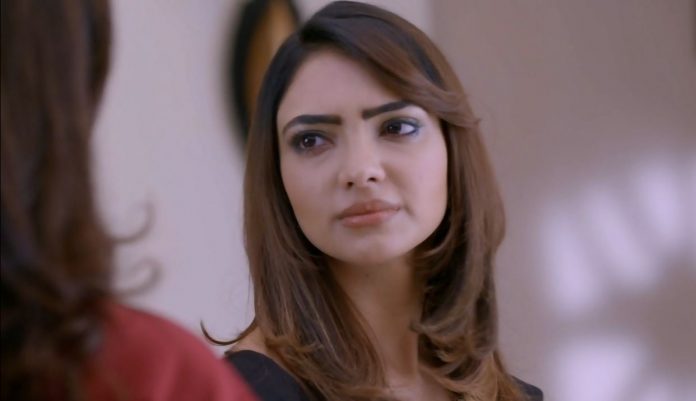 Kumkum Bhagya 14th October 2020 Written Update Rhea in dilemma Ranbir confesses his love to Prachi in the most unique way. His romantic love confession touches her heart. He regards her the world for him. He proposes her. Prachi reciprocates his love. Pragya is tensed about Rhea’s message. Sarita and Shahana wonder if Ranbir had proposed Prachi. They end up arguing. Sarita wants to go and see it herself.

Pragya comes to see Prachi. She finds Ranbir proposing Prachi. Ranbir puts up silly excuses. Pragya knows that Ranbir and Prachi love each other. She tells Prachi that she likes Ranbir too. She wants Prachi to accept Ranbir’s proposal. Ranbir is grateful to Pragya. She asks him not to be shy. She tells that she has come on a wrong time. She asks them to live the moment. Ranbir likes her cool side.

Other side, Aryan is anxious to know about Ranbir’s proposal, if Prachi has replied yes to him. He thinks to call him and ask if he has succeeded. He calls Ranbir. Ranbir gives him the good news that Prachi has accepted his proposal and even her mom has accepted their relation. Aryan is glad to know the good news. Aaliya overhears Aryan and Ranbir’s conversation. Ranbir tells that he was in his limits, he was on his knees when he proposed Prachi. Ranbir narrates everything what happened.

Aaliya goes to ruin Rhea’s mood. Rhea scolds Aaliya for checking her phone and reading Pragya’s message. She reprimands Aaliya for hurting her always. Aaliya bears the insult. She tells Rhea that Pragya doesn’t know about their relationship yet. Rhea tells that she has told Pragya about her jealousy with Prachi, because Abhi and Ranbir always supported Prachi. She wants to meet Pragya, who is waiting for her. Aaliya finds her really stupid. She tells that Pragya is a fraud woman who had faked love for her.

Rhea doesn’t want to listen to any nonsense. Aaliya asks Rhea to think if anyone can be so strange. She fills Rhea’s ears against Pragya. She tells that Pragya wanted to show how much she loves Prachi, she has hurt Rhea to make her life worse. Rhea asks Aaliya not to make her against Prachi. Aaliya tells her that Pragya never loved her, she just loves Prachi. She reminds that Pragya left Rhea alone and took away Prachi with her. She wants Rhea to just remember that Pragya broke her heart.

She reveals that Pragya has accepted Ranbir and Prachi’s relationship. She tells her that Ranbir proposed Prachi, Pragya also accepted the alliance, just to hurt Rhea more. Rhea doesn’t believe it. She tells Aaliya that Pragya is sensitive and loves her a lot. Aaliya calls up Aryan to testify. Aryan tells Rhea that Prachi accepted Ranbir’s love, even her mom agreed to accept them. He doesn’t think any girl should get after Ranbir now.

Rhea feels sorrowful. Aaliya tells her that Pragya has taken revenge on her. Sarita asks Ranbir to have tea with them. Shahana thinks Ranbir is feeling scared of Sarita. Pragya goes to meet Rhea. Sarita wonders why did Pragya go away leaving Prachi and Ranbir’s matter pending. Aaliya counts her favors on Rhea. She tells that Pragya will reject Rhea again. She speaks ill about Pragya. Rhea tells Aaliya that maybe Pragya didn’t know about her. Aaliya tells that Pragya doesn’t need her, she never came home to see her daughter once. She tells that Pragya didn’t even come for Abhi, she doesn’t love Abhi or Rhea.

She wants Rhea to stop thinking of Pragya. Rhea still wants to meet Pragya. Aaliya tries hard to stop her. She feels Rhea will regret meeting Pragya. Rhea finally makes it to meet Pragya. She tries to know from Pragya if she really loves her. She insults Pragya after coming in Aaliya’s words, breaking Pragya’s heart further.

Reviewed Rating for this particular episode Kumkum Bhagya 14th October 2020 Written Update Rhea in dilemma: 3/5
This rating is solely based on the opinion of the writer. You may post your take on the show in the comment section below.